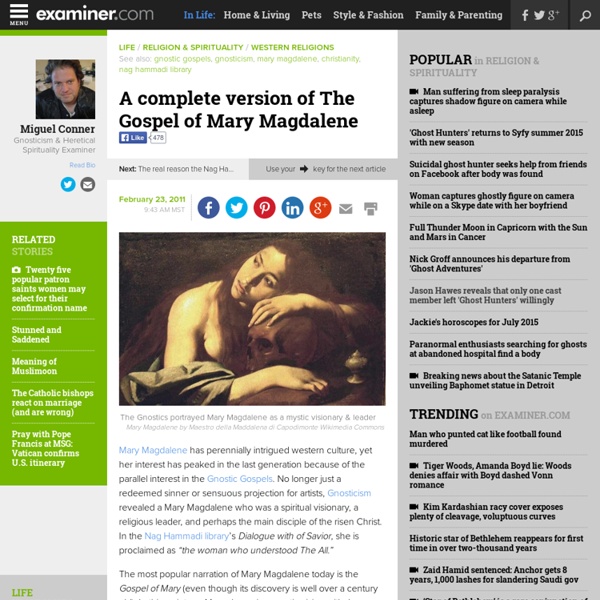 Mary Magdalene has perennially intrigued western culture, yet her interest has peaked in the last generation because of the parallel interest in the Gnostic Gospels. No longer just a redeemed sinner or sensuous projection for artists, Gnosticism revealed a Mary Magdalene who was a spiritual visionary, a religious leader, and perhaps the main disciple of the risen Christ. In the Nag Hammadi library’s Dialogue with of Savior, she is proclaimed as “the woman who understood The All.” The most popular narration of Mary Magdalene today is the Gospel of Mary (even though its discovery is well over a century old). In this scripture, Mary shares in a mystic vision with Jesus concerning the infinite domains. She moreover comforts and leads the other apostles, although not without conflict. In The Pre-Nicene New Testament, Robert M. Price summarizes Mary’s role this scripture as “a symbolic figurehead for Gnostic and other sects who claimed her as their authorization. Related:  old language and texts

The Murder of Mary Magdalene and the Hidden Encryption in Art The Murder of Mary Magdalene and the Hidden Encryption in Art by Dan Green The mysterious biblical figure of Mary Magdalene received a high profile boost to the uninitiated courtesy of Dan Brown’s blockbuster ‘The Da Vinci Code’, elevating her status even higher than when in 1969 the Catholic Church decided to pronounce her a Saint – quite an improvement from their previous character assassination that had assured her image for the previous centuries as being that of a harlot. In Brown’s book and movie Mary was the partner of the biblical Jesus and bore him a child, Sarah, thus the dawning of a royal bloodline. Now cast into the role of a Hercule Poirot style forensic detective, I will try to explain how the evidence began to unfold. A portrayal of Mary Magdalene Mourners at the tomb of the assassinated Benazir Bhutto However I remained troubled by one piece of evidence that had unexpectedly presented itself along the way, originally noticed by an ex-BBC correspondent. Click to enlarge

Early Christian Writings: New Testament, Apocrypha, Gnostics, Ch Gnostic Teachings: The Art, Philosophy, Religion, and Science of Consciousness Gnostic Society Library: Sources on Gnosticism and Gnosis Almost all of the several dozen internet sites with collections of texts similar to our own obtained their material by directly or indirectly copying some files present at the Gnosis Archive. Ours was perhaps the first major collection of such texts to appear on "the web" in 1994, and thus has served as a source for others creating "their own" collections. Unfortunately transcription errors, typos, and primitive HTML formatting were present in the massive amount of material added to the Gnosis Archive in our first years; in a repeated process of "copying" they have been very widely propagated around the internet. Over nearly two decades we have made many corrections to these texts. It appears that few of the sites copying material from this collection have taken the time to read, edit and correct the texts! This is of course exactly how the manuscript tradition has propagated errors in the past centuries, though with vastly different technologies of reproduction.

The Three Love Mantras that Open Your Heart By Marci Shimoff The first time I fell in love I couldn’t believe what happened to the world. The sky had never been that blue before! We’ve all been there, haven’t we? That was the question I set out to answer in my latest book, Love for No Reason. Three Love Mantras that Open Your Heart Love Mantras – #1: Love is Who We Are. Instead of walking around with a little cup, begging for a few drops of love from others, recognize that you’re the huge ocean of love. Maya Once considered an unsolvable enigma, recent advances in the decipherment of the Maya writing system has not only shed light on the mechanics of the script, but also on the socio-political, artistic, and historical aspects of Maya civilization. As a whole, the Maya people created the longest lasting civilization of the New World. It became distinguishable from other early farming cultures of Mesoamerica in the middle of the first millenium BCE, when the first great Maya cities were constructed. Their culture endured through changes, wars, and disasters until it was suppressed by the Spanish conquest in the 16th and 17th centuries. General Overview The Maya hieroglypic writing is arguably one of the most visually striking writing systems of the world. While we're on the subject of what the Maya could "say", let's talk about Maya languages. The visual construction of Maya glyphs is very interesting. The order to read Maya glyphs is also not as straightforward as it would seem. Syllabary

The Gnostic World View: A Brief Summary of Gnosticism Gnosis Archive | Library | Bookstore | Index | Web Lectures | Ecclesia Gnostica | Gnostic Society GNOSTICISM IS THE TEACHING based on Gnosis, the knowledge of transcendence arrived at by way of interior, intuitive means. Although Gnosticism thus rests on personal religious experience, it is a mistake to assume all such experience results in Gnostic recognitions. It is nearer the truth to say that Gnosticism expresses a specific religious experience, an experience that does not lend itself to the language of theology or philosophy, but which is instead closely affinitized to, and expresses itself through, the medium of myth. Indeed, one finds that most Gnostic scriptures take the forms of myths. In the following summary, we will attempt to encapsulate in prose what the Gnostic myths express in their distinctively poetic and imaginative language. The Cosmos All religious traditions acknowledge that the world is imperfect. Deity The Human Being Salvation Conduct Destiny Conclusion + Stephan A.

Early Christianity Early Christianity is the period of Christianity preceding the First Council of Nicaea in 325. It is typically divided into the Apostolic Age and the Ante-Nicene Period (from the Apostolic Age until Nicea). History[edit] During the Ante-Nicene period following the Apostolic Age, a great diversity of views emerged simultaneously with strong unifying characteristics lacking in the apostolic period. According to Will Durant, the Christian Church prevailed over Paganism because it offered a much more attractive doctrine and because the church leaders addressed human needs better than their rivals.[8] Practices[edit] From the writings of early Christians, historians have tried to piece together an understanding of various early Christian practices including worship services, customs and observances. Baptism[edit] Early Christian beliefs regarding baptism probably predate the New Testament writings. The 3rd century evidence is clearer, with both Origen[14] and Cyprian advocating the practice.

House for sale in Cazaubon, France : House 8 rooms Estang Beautiful restored spacious French farmhouse (approximately 225sqm of living place) with an inviting pool of 14x6m (plus cover), and surrounded by 3 hectares of land; including mature gardens and fruit trees. The property has a large living area with stone fireplace, kitchen, 5 bedrooms, 1 bathroom, 3 shower-rooms, and an office. This is a dream home for a family, for retirement, or perhaps for animal lovers, situated as it is, nestled into the peaceful French countryside among meadows and vineyards. The whole property is impeccably maintained and is very practical, with solar panels providing hot water for much of the year. There are no close neighbors but the house is not isolated and is only 2 kms from all amenities. Send an enquiry to the Agent to view more information about this property. Once your enquiry has been sent, the Agent will reply as soon as possible.

How To: Change Your Karma We hear people talking about having good or bad Karma all the time but what really is Karma? Does it affect my soul? How can I change my Karma? First things first, What is Karma? kar·ma noun (in Hinduism and Buddhism) the sum of a person’s actions in this and previous states of existence, viewed as deciding their fate in future existences.informal destiny or fate, following as effect from cause. Check out this awesome video by Shunyamurti from the Sat Yoga Institute about Karma and how we change our Karma. Karma is attached to our EGO. When we are in a deep state of meditation you can access these higher levels of consciousness and change your Karma if you wanted to. How can we change it from our current state of consciousness? There are two main ways to change our Karma here on earth. 1. When you are in meditation focus on sending love to everyone and everything in existence. 2. What do you think about Karma? Thank you for reading, Kirsten Team Spirit

Ten Mysterious Undeciphered Codes and Inscriptions From Neolithic tablets containing the oldest known system of writing, to a series of letters scrawled on the back of a dead man’s book, some of the most legendary undeciphered codes and texts remain a challenge for even the world’s best cryptographers, code breakers, and linguists. Yet unravelling these mysterious puzzles remains as important as ever, since many of these enigmatic inscriptions could hold the keys to understanding civilizations that have long since faded into the pages of history. Here we feature ten of the most fascinating undeciphered codes and inscriptions throughout history. The enigma of the Shugborough Inscription In the grounds of Shugborough Hall in Staffordshire, England, sits an 18th-Century monument known as the Shepherd’s Monument, which was commissioned by Thomas Anson, a member of the British Parliament, and crafted sometime between 1748 and 1763 by Flemish sculptor Peter Schee. The Mysteries Trapped Within Mayan Hieroglyphs The indecipherable Rohonc Codex

Christ in Egypt by Richard Harty May 2, 2009 from WhatIsSpiritual Website The book “Christ In Egypt - The Horus-Jesus Connection” is as much a story of Christianity as the New Testament. It is a story of the evolution of religious belief , beginning in Egypt, that continues today. D.M. She describes the nature of how this story is told. In many ways this book reads like a detective novel. The transformation of Egyptian religious belief is as much a syncretism of various gods and goddesses as is Christianity. There is evidence that the Egyptians were essentially monotheists and saw the various gods as simply one aspect of the great unknown creator god. An example of this is a Horus-Seth united in a single being from the Amduat. This mode of religious expression is very foreign to the Christian believer who has been taught that God does not change. Yet, even within the last 100-200 years we see various forms of Christianity being combined with modern ideas rather freely. D.M. "St. Cyprian also writes, D.M.