25 Things Every Writer Should Know 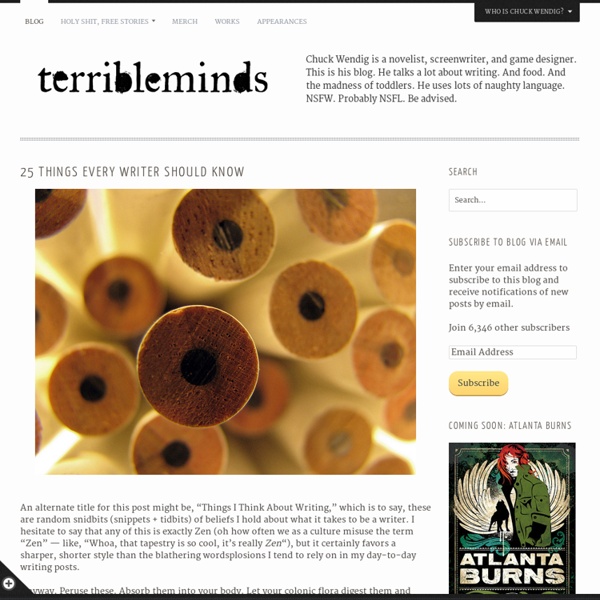 An alternate title for this post might be, “Things I Think About Writing,” which is to say, these are random snidbits (snippets + tidbits) of beliefs I hold about what it takes to be a writer. I hesitate to say that any of this is exactly Zen (oh how often we as a culture misuse the term “Zen” — like, “Whoa, that tapestry is so cool, it’s really Zen“), but it certainly favors a sharper, shorter style than the blathering wordsplosions I tend to rely on in my day-to-day writing posts. Anyway. Peruse these. Absorb them into your body. Let your colonic flora digest them and feed them through your bloodstream to the little goblin-man that pilots you. Feel free to disagree with any of these; these are not immutable laws. Buckle up. 1. The Internet is 55% porn, and 45% writers. 2. A lot of writers try to skip over the basics and leap fully-formed out of their own head-wombs. 3. 4. I have been writing professionally for a lucky-despite-the-number 13 years. 5. Luck matters. 6. 7. 8. 9. 10. 11.

25 Insights on Becoming a Better Writer When George Plimpton asked Ernest Hemingway what the best training for an aspiring writer would be in a 1954 interview, Hem replied, “Let’s say that he should go out and hang himself because he finds that writing well is impossibly difficult. Then he should be cut down without mercy and forced by his own self to write as well as he can for the rest of his life. At least he will have the story of the hanging to commence with.” Eight Secrets Which Writers Won’t Tell You Image from Flickr by Lazurite This is not particularly relevant to the post, but I’m getting an awful lot of comments telling me, often a little snarkily, “it’s ‘THAT’ not ‘WHICH’”. The “don’t use which for restrictive clauses” rule comes (as far as I can tell) from Strunk and White. Plenty of authors, including Austen, have used “which” exactly as I use it in the title. It’s very commonly used like this here in England, so I’m guessing my comments are coming from US readers. There was never a period in the history of English when “which” at the beginning of a restrictive relative clause was an error.

25 Things You Should Know About Storytelling 1. Stories Have Power Outside the air we breathe and the blood in our bodies, the one thing that connects us modern humans today with the shamans and emperors and serfs and alien astronauts of our past is a heritage — a lineage — of stories. Stories move the world at the same time they explain our place in it. They help us understand ourselves and those near to us. 9 Editing Tips that Make Your Writing Sparkle It’s often said that writing is rewriting. Banging out a quick first draft can be fun, but the real grunt work comes in revising your work. Here are nine editing tips that can help you polish your writing until it sparkles: 1. Read aloud When you become too familiar with a piece of writing, suddenly it’s more difficult to spot weaknesses and errors.

Twenty Rules of Thumb for Creativity Twenty Rules of Thumb for Creativity 1. The best way to get great ideas is to get lots of ideas and throw the bad ones away. 2. Tension Hook Your Readers With Tension By Laura Backes, Write4Kids.com Tension. Without it, life would be—let's face it—boring. So would fiction. Tension works with conflict to raise the emotional level of the text to a boiling point. It forces the reader to become invested in the story. How I Make My Living as an Online Writer (And How You Could Too) (Photo by Antonina, a fantastic London contemporary portrait photographer) The end of this month will mark three years since I left my day job. Since then, I’ve been supporting myself through writing. It’s my dream career – and I love being able to set my own hours, work from home, and have a huge amount of flexibility and freedom.

25 Things You Should Know About Character Previous iterations of the “25 Things” series: 25 Things Every Writer Should Know 25 Things You Should Know About Storytelling And now… Writer’s Digest - Writing Prompts Write a scene that includes a character speaking a different language, speaking in a thick accent, or otherwise speaking in a way that is unintelligibe to the other characters. (Note: You don't necessarily need to know the language the character is speaking—be creative with it!) Describe a character's reaction to something without explaining what it is. Strategy List: 35 Dimensions of Critical Thought S-1 Thinking Independently Principle: Critical thinking is independent thinking, thinking for oneself. Many of our beliefs are acquired at an early age, when we have a strong tendency to form beliefs for irrational reasons (because we want to believe, because we are praised or rewarded for believing). Critical thinkers use critical skills and insights to reveal and reject beliefs that are irrational.

How I use OneNote for my Dissertation « ProtoScholar The question came up recently about how I am using OneNote for my dissertation note taking. Sometimes show is easier than tell. I have one OneNote notebook called Dissertation. Within it, I have 8 sections: Getting NaNoWriMo Done: How to Write a Novel in 30 Days With November 1st almost upon us, NaNoWriMo is set to begin. There are plenty of tools to help budding novelists achieve the goal of 50,000 words in 30 days, but what about the reasons behind committing to such a daunting task in the first place? Surely, many of those taking on the challenge have other priorities that they have to deal with – myself included – so adding on the pressure of pushing through those commitments and the occasional bout of writer’s block is going to take herculean effort, right? Well, yes…and no.