The Overdue Death of the Southern Democrats. Mary Landrieu’s defeat last weekend marked a final, anticlimactic end to an epoch in American politics. 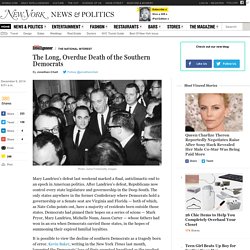 After Landrieu’s defeat, Republicans now control every state legislature and governorship in the Deep South. The Overdue Death of the Southern Democrats. Democrats can’t win white working class voters: The party is too closely identified with blacks, Latinos, and other minorities. Photo by Rebecca Cook/Reuters The Democratic Party styles itself a fighter for the working class. 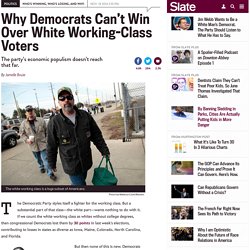 But a substantial part of that class—the white part—wants nothing to do with it. If we count the white working class as whites without college degrees, then congressional Democrats lost them by 30 points in last week’s elections, contributing to losses in states as diverse as Iowa, Maine, Colorado, North Carolina, and Florida. Jamelle Bouie is a Slate staff writer covering politics, policy, and race. Progressive threat to the left. Two events last week involving elements of the Democratic Party who call themselves the “true progressives” show a danger they represent to the progressive change they say they want to effect. 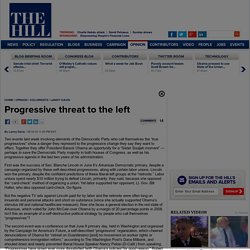 Together they offer President Barack Obama an opportunity for a “Sister Souljah moment” — perhaps to save the Democratic Party majority in both houses of Congress, as well as his progressive agenda in the last two years of his administration. First was the success of Sen. Blanche Lincoln in June 8’s Arkansas Democratic primary, despite a campaign organized by these self-described progressives, along with certain labor unions.

Lincoln won the primary, despite the confident predictions of these liberal-left groups at the “netroots.” Labor unions spent nearly $10 million trying to defeat Lincoln, primarily, they said, because she opposed the “card-check” method of organizing a union. Jonathan Alter: Here come the liberals. You can already hear the rumbling in the distance — a train of noisy liberal Democrats barreling straight for the White House. 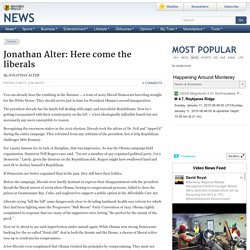 They should arrive just in time for President Obama's second inauguration. The president already has his hands full dealing with angry and unrealistic Republicans. You Think Obama’s Been a Bad President? Prove It: Jonathan Alter. Tell me again why Barack Obama has been such a bad president? 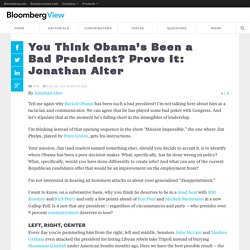 I’m not talking here about him as a tactician and communicator. A Liberal Defense of Barack Obama’s Foreign Policy. Barack Obama’s foreign policy has come under sustained criticism during his second term. 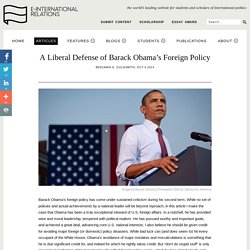 While no set of policies and actual achievements by a national leader will be beyond reproach, in this article I make the case that Obama has been a truly exceptional steward of U.S. foreign affairs. In a nutshell, he has provided wise and moral leadership, tempered with political realism. He has pursued worthy and important goals, and achieved a great deal, advancing core U.S. national interests. I also believe he should be given credit for avoiding major foreign (or domestic) policy disasters.

While bad luck can (and does seem to) hit every occupant of the White House, Obama’s avoidance of major mistakes and miscalculations is something that he is due significant credit for, and indeed for which he rightly takes credit. The State of Liberalism. That would be fine (people are sick of labels) if clarity weren’t such an obvious political advantage. 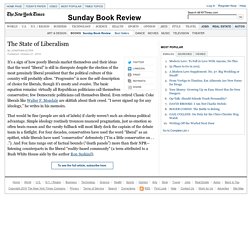 Simple ideology routinely trounces nuanced pragmatism, just as emotion so often beats reason and the varsity fullback will most likely deck the captain of the debate team in a fistfight. For four decades, conservatives have used the word “liberal” as an epithet, while liberals have used “conservative” defensively (“I’m a little conservative on . . .”). And Fox fans range out of factual bounds (“death panels”) more than their NPR-­listening counterparts in the liberal “­reality-based community” (a term attributed to a Bush White House aide by the author ).

Liberals are also at a disadvantage because politics, at its essence, is about self-interest, an idea that at first glance seems more closely aligned with conservatism. That challenge is made even harder because of a tactical split within liberalism itself. But now the president is getting hit from both sides. Progressive media claims they'll be 'tougher' on Obama now. Last week, the Huffington Post's media reporter, Michael Calderone, wrote a long article on the widespread perception that MSNBC isn't so much a progressive network as it is "simply pro-Obama". 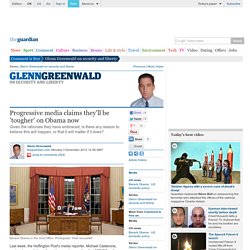 Citing a new Pew study that found that MSNBC was actually more negative toward Romney than even Fox News was against Obama "and offered mostly positive coverage about Obama" - most remarkably, during the last week of the campaign, MSNBC did not air a single story critical of Obama: not one - Calderone wrote: "post-election, the question is whether MSNBC continues cheering Obama on - or takes him on. " On Sunday, Politico's media reporter, Dylan Byers, set out in search of an answer to that question, not regarding MSNBC specifically but "progressive media" generally. Final Weeks in the Mainstream Press.

Throughout most of the general campaign period, President Obama received slightly better coverage in the mainstream press than Governor Romney did. 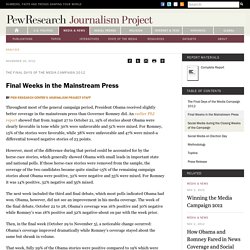 An earlier PEJ report showed that from August 27 to October 21, 19% of stories about Obama were clearly favorable in tone while 30% were unfavorable and 51% were mixed. President Obama: Republicans blocked 500 bills - Jonathan Topaz. President Barack Obama is railing against congressional Republicans, telling a Hollywood crowd that the midterm elections are crucial because the GOP is willing “to say no to everything.” 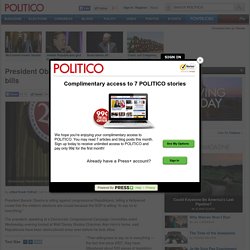 The president, speaking at a Democratic Congressional Campaign Committee event Wednesday evening hosted at Walt Disney Studios Chairman Alan Horn’s home, said Republicans have been obstructionist since even before he took office. Continue Reading “Their willingness to say no to everything — the fact that since 2007, they have filibustered about 500 pieces of legislation that would help the middle class just gives you a sense of how opposed they are to any progress — has actually led to an increase in cynicism and discouragement among the people who were counting on us to fight for them,” Obama said of Republicans. “The conclusion is, well, nothing works,” the president continued. Bush Addresses Income Inequality. NEW YORK, Jan. 31 -- President Bush acknowledged Wednesday that there is growing income inequality in the United States, addressing for the first time a subject that has long concerned Democrats and liberal economists.

"The fact is that income inequality is real -- it's been rising for more than 25 years," Bush said in an address on Wall Street. "The reason is clear: We have an economy that increasingly rewards education and skills because of that education. " In some respects, Bush's remarks were an unremarkable statement of what many economists accept as common wisdom. But they appeared to represent the first time Bush has personally addressed an issue on which his administration has found itself under fierce attack from Democrats.

The Unwinding. The Unwinding: An Inner History of the New America is a 2013 non-fiction book by American journalist George Packer. The book uses biographies of individual Americans as a means of discussing important forces in American history from 1978 to 2012, including the subprime mortgage crisis, the decline of American manufacturing, and the influence of money on politics. The Unwinding includes lengthy profiles of five subjects: a Youngstown, Ohio factory worker turned community organizer, a biodiesel entrepreneur from North Carolina, a Washington lobbyist and Congressional staffer, a Silicon Valley entrepreneur, and people involved in the distressed housing market in Tampa, Florida. The Con-Artist Wing of the Democratic Party. Former US Treasury Secretary Tim Geithner (left) yucking it up at a meeting of global elites in 2009. Photo via Flickr user IMF The most consequential event of this young century has been the financial crisis.

This is a catchall term that means three different things: an economic housing boom and bust, a financial meltdown, and a political response in which bailouts were showered upon the very institutions that were responsible for the chaos. We will be seeing the fallout for decades. Today, in Europe, far-right fascist parties are on the rise, climbing the unhappiness that the crisis-induced austerity has unleashed. Syllogism. Bill Moyers Journal: William K. Black on The Prompt Corrective Action Law. I was the staff leader for Federal Home Loan Bank Board Chairman Ed Gray’s successful reregulation of the S&L industry.

That reregulation provided the tools that allowed the agency to place in receivership many of the worst control frauds. Gray inherited (and for a time supported) a dominant strategy of covering up the scale of the S&L industry’s insolvency. He personally recruited vigorous senior regulators such as Michael Patriarca and Joe Selby to reverse that strategy. The Financial Crisis: Why Have No High-Level Executives Been Prosecuted? by Jed S. Rakoff. Five years have passed since the onset of what is sometimes called the Great Recession. While the economy has slowly improved, there are still millions of Americans leading lives of quiet desperation: without jobs, without resources, without hope. All the President's zombies. Correcting Vox on Cramdown. Employee Free Choice Act. Barack Obama is powerless: he might as well bask on the beach.

His economic inheritance was the worst of any new incumbent in memory, but to a country still hag-ridden by race, this was no mere politician. Barack Obama, Lyndon Johnson and Presidential Comparisons. We measure our presidents against not only our hopes for the present, which are sometimes unreasonable, but also our understanding of the past, which can be just as flawed. It’s not just Fox News: How liberal apologists torpedoed change, helped make the Democrats safe for Wall Street. Liberal Despair And the Cult Of The Presidency.