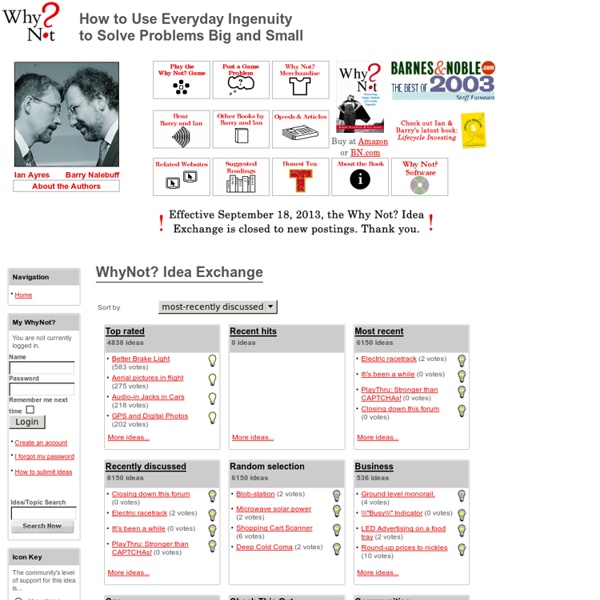 Ideas bank Many ideas banks are provided as free of charge, or set around certain companies in general to work out new inventions. Although ideas are provided by a community of people, problems can arise when people take the ideas of the site and begin developing them.[citation needed] There is no possible way to prove that the idea on the ideas bank was original and not taken from something else. The front end of innovation is quite distinct from the remainder of the innovation process. MakerBot Replicator impressions: the dawning of 3D printers in every home? There's something universally appealing about the concept of a 3D printer -- that concept being an automated system capable of turning computer code into real-world objects. I found myself forced to give a brief overview of the technology to AOL employees in our shared New York City office space after a particularly noisy initial run of MakerBot's Replicator. Reactions to such explanations tend to follow a fairly standard arc, beginning with wide-eyed wonder as one attempts to wrap their brain around the idea, followed almost immediately by a list of things they'd love to print out, given a chance. This is usually coupled with questions like "can it print food?" and "can I print a car?"

10 Mind-Blowing Theories That Will Change Your Perception of the World Reality is not as obvious and simple as we like to think. Some of the things that we accept as true at face value are notoriously wrong. Scientists and philosophers have made every effort to change our common perceptions of it. The 10 examples below will show you what I mean. 1. How Your Body is Like a Factory Did you know that you can actually hear pulmonary circulation? Pulmonary circulation is the movement of blood though the right side of the heart, to the lungs, and then back through the left side of the heart. The “lub dub” you hear when using a stethoscope is the sound of the ventricles contracting and the heart valves closing during this circulation process.

Global Ideas Bank The Global Ideas Bank's origins lie in the Institute for Social Inventions, which was set up in 1985 by Nicholas Albery, social inventor and visionary. From small beginnings (a network of inventors, a quarterly newsletter), the Institute grew into a full-fledged organisation under his leadership: producing an annual compendium, running social inventions workshops and promoting creative solutions around the world. It was part of the first European Social Innovations Exchange. In 2001, the Institute was awarded a Margaret Mead Special Recognition Award for "community creativity for a new century" In 1995, the Global Ideas Bank (originally suggested by an American correspondent, Gregory Wright) was first established online, and has since become the name for the entire project's work. See also[edit]

Arduino Drum Kit This Piezo Drum Kit from Spikenzie Labs looks like it could provide days of fun. They provide interface software that allows you to output MIDI data from your Arduino that this kit is connected to. Thanks for the tip Andy, send us some pictures when yours is built! "The kit contains the electronic parts required to make a drum kit. This includes the circuit board, resistors, diodes and pins. You supply the Arduino and the material to make the actual drum pads.

gavinkeech personal cargo phases are cycling through the increase of momentum brought on by interplay sequenced through recognition. exhausting parameters to their stretched states allow the decay values to become discovered. upon discovery, arrival of presence, flows to the environments ground. intensity of emotion, feelings entwined with realisation that the possibilities can arise more probable than initially conditioned, through emergence of understanding what is required, do vectors resonate inputs, to flow freely, in their own accord towards the electromagnetic* (resonance)+ core. state / mode as an interface ( points & flows with vectors ) personas / metaconstructs = state / mode identity / experience filter = timelines dimension / environment = interface process / mechanism = actions knowledge / repository = database timelines ( personas ) are extrapolations (verb)actions ( entanglement ) are amplifications (verb)interface ( metaconstructs ) are communications (verb) hyperphysics x_axis = time’s affinity

notthisbody personal cargo Some thoughts on the New Aesthetic. A few days ago Bruce Sterling posted an "Essay on the New Aesthetic", summing up his most recent thoughts after a panel at SXSW, similarly titled "The New Aesthetic - Seeing like digital devices". The focal point of definition for this New Aesthetic is well documented and a gestalt emerges quite quickly on the New Aesthetic tumblr, a juxtaposition of quotes, images, sensations, videos highlighting myriad examples of that which its curators are recognizing is already happening. In short, New Aesthetic touches in some sense the bleeding of the virtual dimension into the actual and our increasing reflection of our own methods of sensing in machines, and vice versa.