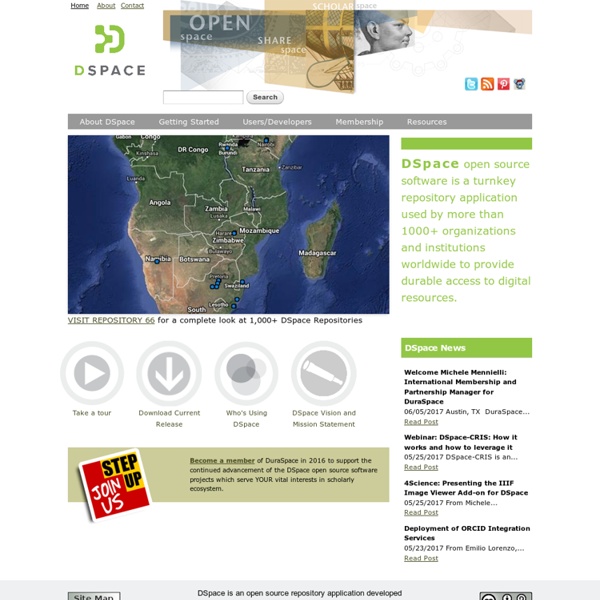 Biblioteca Vasconcelos in Mexico City is gigantic. The gorgeous structure, which covers 38,000 square meters (that's over 400,000 square feet), holds more than 470,000 books. Designed by Alberto Kalach, the "megalibrary" features transparent walls, hive-like bookshelves, and mismatched floors. Visitors can take in a massive white whale skeleton covered in graphite rings by artist Gabriel Orozco. Institutional Repositories Institutional Repositories (IRs) can be directly loaded into EBSCO Discovery Serviceso that they can be fully searched alongside all other EDS resources/content. Loading Institutional Repositories EBSCO supports harvesting institutional repositories via Open Archives Initiative Protocol for Metadata Harvesting (OAI-PMH) or via File Transfer Protocol (FTP). Cover Story: Station to Station: The Past, Present, and Future of Streaming Music On-demand streaming music has been part of the collective imagination for more than a century. It can be traced back to the 1888 publication of Edward Bellamy’s million-selling science fiction novel Looking Backward, in which a man falls asleep in 1887 and wakes up in 2000. Amidst the mind-blowing technological developments he encounters on his journey is a “music room,” in which 24-hour playlists are piped in to subscribers via phone lines. With no shortage of astonishment, the man proclaims that “an arrangement for providing everybody with music in their homes, perfect in quality, unlimited in quantity, suited to every mood, and beginning and ceasing at will” is perhaps the pinnacle of human achievement.

50 Must-Read Personal Development Bloggers That’ll Change Your Life Tired of reading the same blogs over and over? Looking for fresh articles to read? A new angle on your favorite personal development topics? I got you covered! As much as I love writing about this subject, I can’t take credit for everything I write. Much of my knowledge on self-development came from reading these great writers and thinkers. Institutional repository software comparison The Guidelines to compare Institutional Repository Software have been published as part of UNESCO’s Open Access Strategy. The publication compares the features of the major platforms and is intended to help libraries focus on which features will help facilitate the success of their repository. Institutional Repositories (IRs) were first developed as an online solution for collecting, preserving, and disseminating the scholarship of universities, colleges, and other research institutions. Since 2000, a number of repository platforms have been developed, each with their own set of benefits and technical criteria. All of these put libraries exploring IRs for the first time in an enviable position. The products have richer feature sets, and all the major platforms are available as a hosted service, which arguably has a lower total cost of ownership and is less time-consuming than running an IR locally.

Border Heritage Center - Otis A Aultman Photo Collection By 1911 El Paso was a gathering place for many of the main personalities of the Mexican Revolution (Francisco Madero, Francisco (Pancho) Villa, Pascual Orozco) and after the shooting began, many American newsmen also flocked to El Paso to cover the event. Aultman was a man in the right place at the right time. He photographed the battle of Casas Grandes, the first battle of Juárez in May 1911, and the Orozco rebellion in 1912. He was a favorite of Pancho Villa, who called Aultman "Banty Rooster" because he was only 5'4" tall. Aultman worked for the International News Service and Pathé News and experimented with cinematography. In 1916 he was one of the first photographers to arrive at Columbus, New Mexico, after the famous raid on that town by the Villistas.

Handle System - Wikipedia As with handles used elsewhere in computing, Handle System handles are opaque, and encode no information about the underlying resource, being bound only to metadata regarding the resource. Consequently, the handles are not rendered invalid by changes to the metadata. The system was developed by Bob Kahn at the Corporation for National Research Initiatives (CNRI). The original work was funded by the Defense Advanced Research Projects Agency (DARPA) between 1992 and 1996, as part a wider framework for distributed digital object services,[2] and was thus contemporaneous with the early deployment of the World Wide Web, with similar goals. The Handle System was first implemented in autumn 1994, and was administered and operated by CNRI until December 2015, when a new "multi-primary administrator" (MPA) mode of operation was introduced.

Victorian post-mortem photography Via a fascinating blog that was pointed out to me (Morbid Anatomy), I came across a story from last winter about how a Colorado nonprofit organization is reviving a Victorian custom about which I had been largely ignorant, namely the custom of taking photographs of recently deceased loved ones as mementos. Indeed, the photographs were known as “memento mori.” The group, called Now I Lay Me Down to Sleep, takes carefully posed photographs that are truly astonishing. Benson Latin American Collection Ernesto Cardenal Papers: Selected Materials on Display Wednesday, December 7, 2016 to Monday, May 15, 2017 Ernesto Cardenal conducting mass in Solentiname, Nicaragua, 1974 The opening of the Ernesto Cardenal Papers at the Benson Latin American Collection was celebrated on November 15, 2016, with a poetry reading by the Nicaraguan luminary himself, preceded by a panel discussion among scholars of literature, religion, and political science. But although the “main event” has come and gone, the presence of Cardenal’s rich and multifaceted archive at The University... Read More

This is the study of the interaction of people, media and machines within the digital environment. It emerges from the complex inter-relationships between computers and networks, humans, human society and the media – the way that almost every aspect of our culture (including the sciences, arts, civic life, entertainment, fiscal, economic and business sectors) is increasingly underpinned by digital networks. Understanding this ecology is the new literacy of the 21st century. Persistent uniform resource locator - Wikipedia A persistent uniform resource locator (PURL) is a uniform resource locator (URL) (i.e., location-based uniform resource identifier or URI) that is used to redirect to the location of the requested web resource. PURLs redirect HTTP clients using HTTP status codes. PURLs are used to curate the URL resolution process, thus solving the problem of transitory URIs in location-based URI schemes like HTTP. Technically the string resolution on PURL is like SEF URL resolution. History[edit]

Children and Youth in History Introduction Children and youth in early modern England (1500-1800) were subject to many diseases and physical hardships. From the great epidemic diseases of bubonic plague and smallpox, to more common illnesses such as measles and influenza that still afflict children today, sickness put children and youth at great risk.