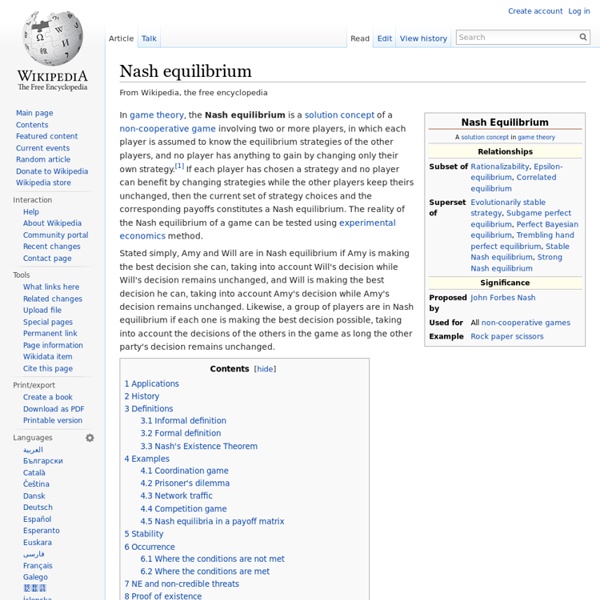 In game theory, the Nash equilibrium is a solution concept of a non-cooperative game involving two or more players, in which each player is assumed to know the equilibrium strategies of the other players, and no player has anything to gain by changing only their own strategy.[1] If each player has chosen a strategy and no player can benefit by changing strategies while the other players keep theirs unchanged, then the current set of strategy choices and the corresponding payoffs constitutes a Nash equilibrium. The reality of the Nash equilibrium of a game can be tested using experimental economics method. Stated simply, Amy and Will are in Nash equilibrium if Amy is making the best decision she can, taking into account Will's decision while Will's decision remains unchanged, and Will is making the best decision he can, taking into account Amy's decision while Amy's decision remains unchanged. Applications[edit] History[edit] The Nash equilibrium was named after John Forbes Nash, Jr. Let .

A Keynesian Beauty contest in the classroom A Keynesian Beauty Contest in the Classroom Rosemarie Nagel Universitat Pompeu Fabra, Barcelona Most models of economic behavior are based on the assumption of rationality of economic agents and common knowledge of rationality. This means that an agent selects a strategy that maximizes his utility believing that all others do the same (are equally rational) and that all agents believe that all others believe that all agents are rational etc. Keynesian beauty contest A Keynesian beauty contest is a concept developed by John Maynard Keynes and introduced in Chapter 12 of his work, The General Theory of Employment, Interest and Money (1936), to explain price fluctuations in equity markets. Overview[edit] Keynes described the action of rational agents in a market using an analogy based on a fictional newspaper contest, in which entrants are asked to choose the six prettiest faces from a hundred photographs.

Game theory Game theory is the study of strategic decision making. Specifically, it is "the study of mathematical models of conflict and cooperation between intelligent rational decision-makers."[1] An alternative term suggested "as a more descriptive name for the discipline" is interactive decision theory.[2] Game theory is mainly used in economics, political science, and psychology, as well as logic, computer science, and biology. The subject first addressed zero-sum games, such that one person's gains exactly equal net losses of the other participant or participants. Today, however, game theory applies to a wide range of behavioral relations, and has developed into an umbrella term for the logical side of decision science, including both humans and non-humans (e.g. computers, animals).

Social trap Social trap is a term used by psychologists to describe a situation in which a group of people act to obtain short-term individual gains, which in the long run leads to a loss for the group as a whole. Examples of social traps include overfishing, energy "brownout" and "blackout" power outages during periods of extreme temperatures, the overgrazing of cattle on the Sahelian Desert, and the destruction of the rainforest by logging interests and agriculture.[citation needed] Origin of the concept[edit] The application of behavioral psychology terms to behaviors in the tragedy of the commons led to the realization that the same short-term/long-term cause-effect relationship also applied to other human traps, in addition to the exploitation of commonly held resources.

Ranking Cute Animals: A Stock Market Experiment : Planet Money On the surface, Planet Money's first-ever economics experiment was all about cute animals. (You can see the experiment here.) But we were really trying to get a better sense of how the stock market works. We got the idea from John Maynard Keynes. Back in 1936, he described the stock market as a particular kind of beauty contest. Social cognitive theory Social cognitive theory (SCT), used in psychology, education, and communication, holds that portions of an individual's knowledge acquisition can be directly related to observing others within the context of social interactions, experiences, and outside media influences. The theory states that when people observe a model performing a behavior and the consequences of that behavior, they remember the sequence of events and use this information to guide subsequent behaviors. Observing a model can also prompt the viewer to engage in behavior they already learned.[1][2] In other words, people do not learn new behaviors solely by trying them and either succeeding or failing, but rather, the survival of humanity is dependent upon the replication of the actions of others. Depending on whether people are rewarded or punished for their behavior and the outcome of the behavior, the observer may choose to replicate behavior modeled. History[edit] In 1941, Neal E.

Behavioral dynamics and influence in networked coloring and consensus Author Affiliations Edited by Brian Skyrms, University of California, Irvine, CA, and approved July 16, 2010 (received for review February 3, 2010) A correction has been published Abstract We report on human-subject experiments on the problems of coloring (a social differentiation task) and consensus (a social agreement task) in a networked setting. Both tasks can be viewed as coordination games, and despite their cognitive similarity, we find that within a parameterized family of social networks, network structure elicits opposing behavioral effects in the two problems, with increased long-distance connectivity making consensus easier for subjects and coloring harder.

Tragedy of the commons The tragedy of the commons concept is often cited in connection with sustainable development, meshing economic growth and environmental protection, as well as in the debate over global warming. It has also been used in analyzing behavior in the fields of economics, evolutionary psychology, anthropology, game theory, politics, taxation, and sociology. However the concept, as originally developed, has also received criticism for not taking into account the many other factors operating to enforce or agree on regulation in this scenario. Lloyd's pamphlet[edit] In 1833, the English economist William Forster Lloyd published a pamphlet which included an example of herders sharing a common parcel of land on which they are each entitled to let their cows graze.

Pareto efficiency Pareto efficiency, or Pareto optimality, is a state of allocation of resources in which it is impossible to make any one individual better off without making at least one individual worse off. The term is named after Vilfredo Pareto (1848–1923), an Italian economist who used the concept in his studies of economic efficiency and income distribution.[citation needed] The concept has applications in academic fields such as economics and engineering. For example, suppose there are two consumers A & B and only one resource X.