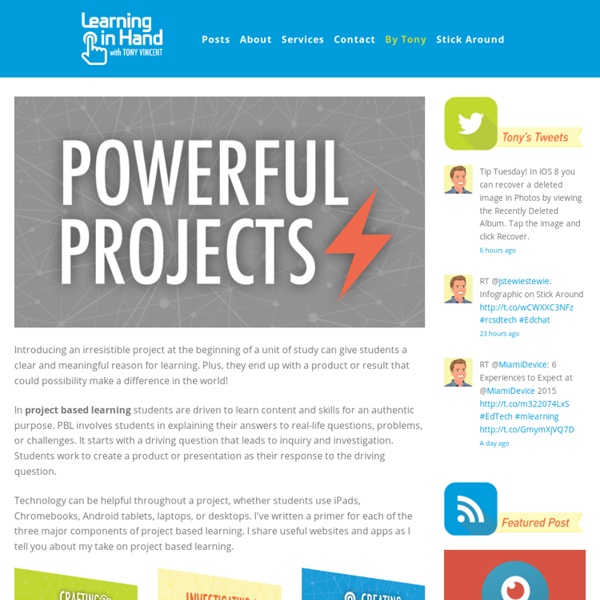 Introducing an irresistible project at the beginning of a unit of study can give students a clear and meaningful reason for learning. Plus, they end up with a product or result that could possibility make a difference in the world! In project based learning students are driven to learn content and skills for an authentic purpose. PBL involves students in explaining their answers to real-life questions, problems, or challenges. It starts with a driving question that leads to inquiry and investigation. Students work to create a product or presentation as their response to the driving question. Technology can be helpful throughout a project, whether students use iPads, Chromebooks, Android tablets, laptops, or desktops.

Tales of Utopia « In the beginning part of the year, I started collaborating with Jeff in Montana on a Gifted and Talented project, where middle school students undertook a unit on Utopia. The study book was Animal Farm. We developed a series of activities to meet the standards, which ultimately had the goal of engaging students in creating their own original short stories that used themes taken from the book and other texts. The project culminated in his students publishing their book online. The stories they created are excellent! iPad teaching is NOT about iPads I’ve covered technical and workflow ideas on this blog a lot but it’s time to properly summarise a teacher’s first priority when the kids have iPads. Now here is where I have an issue with terminology… Maybe not an issue of “Pedagogy” (As many know it) Until a few years ago, I would have used the word pedagogy in this post but this now has the wrong connotations for me as it is linked more strongly to ‘teaching’ and not ‘learning’. To many I’ve worked with, the word pedagogy still implies “the way in which I deliver the content to the students”

New Study Finds iPads in the Classroom Boost Test Scores A new study shows that students who use iPads in the classroom score better in literacy tests than those who don’t. As previously reported, educators in Auburn, Maine began instructing 266 kindergarteners using the iPad 2 this fall, and those who used the tablet scored higher on literacy tests and were more enthused about learning, according to Apple blog TUAW. For parents and educators, higher test scores are enough of a result to turn heads. Last month, Apple ramped up its educational effortsby launching iBooks 2 and iBooks Author, an e-book creation platform teachers and smaller publishers can use to develop apps.

Utopia Etymology[edit] Varieties[edit] Ecology[edit] Ecological utopian society describes new ways in which society should relate to nature. They react to a perceived widening gap between the modern Western way of living that, allegedly, destroys nature[3] and a more traditional way of living before industrialization, that is regarded by the ecologists to be more in harmony with nature. Keep It Simple: With Apps, Less is More Our blog has been a little quiet for a while (okay.. a LONG while..), which I attribute to an abundance of activity, not a lack thereof! A wonderful visit this year by teachers from Iowa, Wisconsin, and Champaign, Illinois reminded us of the importance of documenting and sharing our iPad journey, so the Burley team is making a resolution to post more frequently in 2014. Now in year four of iPad implementation, our approach to apps has evolved considerably. We started where many teachers start: by combing through the app store, looking for apps for just about everything. And we still get excited when we discover a cool new app -- who doesn't? But as time has passed, we find ourselves settling in to workflows and tools that can be used again and again across the curriculum.

Design Your Own Utopia Introduction Why would anyone want to design a utopia? There are several reasons. The most important is that utopian thought is essential to social change. Without a vision of something better, something that inspires, the chance of social progress is low; and the clearer the vision, the better the chances of achieving it. While the idea of overhauling society as a whole can be daunting, utopian thought does not have to be applied on a global scale to be of value.

100 Ways To Use iPads In Your Classroom There’s likely a new iPad getting unveiled in the very near future. Like, in the next couple of weeks kinda near future. What better time to take a step back and figure out how to actually use these devices in your classroom? There’s more to the iPad than just apps . Just ask the always incredible Tom Barrett , creator of the below presentation. Some of my favorites from the presentation (use the bottom left arrows to advance and go back) are below.

Challenge-Based Learning As described in the paper, challenge-based learning includes these attributes: Multiple points of entry and varied and multiple possible solutionsAuthentic connection with multiple disciplinesFocus on the development of 21st century skillsLeverages 24/7 access to up to date technology tools and resources, allowing students to do the work.Use of Web 2.0 tools for organizing, collaborating, and sharing[1]A focus on universal challenges with local solutionsRequirement that students do something rather than just learn about somethingDocumentation of the experience from challenge to solution. These attributes are intended to ensure that challenge-based learning engages learners, provides them with valuable skills, spans the divide between formal and informal learning and embraces a student's digital life. (Apple Inc., 2009, p. 2) The New Media Consortium published an in-depth study of challenge-based learning in classroom practice in early 2009. References[edit]