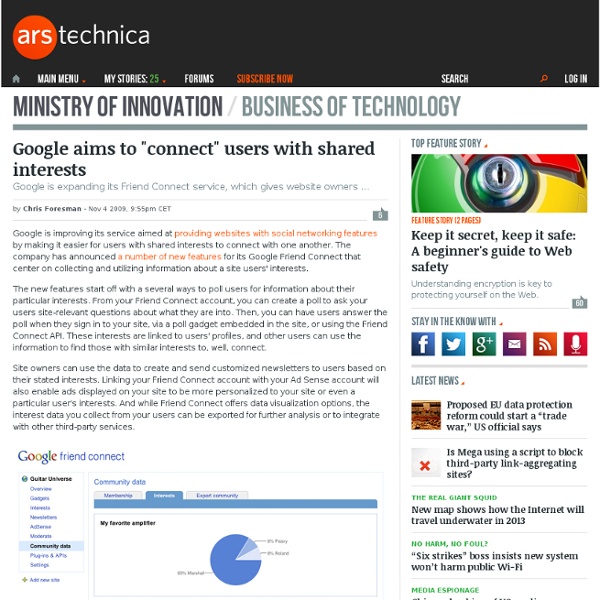 Google is improving its service aimed at providing websites with social networking features by making it easier for users with shared interests to connect with one another. The company has announced a number of new features for its Google Friend Connect that center on collecting and utilizing information about a site users' interests. The new features start off with a several ways to poll users for information about their particular interests. From your Friend Connect account, you can create a poll to ask your users site-relevant questions about what they are into. Then, you can have users answer the poll when they sign in to your site, via a poll gadget embedded in the site, or using the Friend Connect API. Site owners can use the data to create and send customized newsletters to users based on their stated interests. Here's a sample of the data you might collect if you ran a site about electric guitars. A quick demo of some of the new Google Friend Connect features

Google Takes Another Swipe At Newspapers And Magazines With Fast Flip Traditional print media companies got the Internet all wrong. It started off in the wrong place and it seems like there is little they can do to recuperate. To make matters better (or worse, depending on who you ask), Google just introduced another platform/destination today called, Fast Flip. While it's still in beta (and what great online application isn't?), the product was announced on the Official Google Blog today in a post titled, Read news fast with Google Fast Flip. Here's the skinny on Fast Flip via Google: "Fast Flip is a new reading experience that combines the best elements of print and online articles. So, what was traditional print medias big mistake? Reading content is still compelling (even in the traditional print format). Google Fast Flip is going to make people more loyal to Google, not the source publications. Traditional print publishers must be making some money with Fast Flip. By Mitch Joel

Google: The search party is over Yes, the company is still growing at rates that would be the envy of the rest of the Fortune 500. But its core business is slowing, its stock is down, its Android mobile platform generates scant revenue, and competition (hello, Facebook) is fierce. Can Google find its footing in this brave new world? By Michael V. Google founders Larry Page (left) and Sergey Brin invented the algorithm that drives nearly all of Google's revenue. Stroll across the Googleplex in Mountain View, Calif., and you are confronted by a world that sparkles a bit more than whatever slightly dreary one you just left. It looks a lot like the midday break at some elite college campus. The Googlers certainly know this, but in classic Innovator's Dilemma fashion, the company seems unsure about how to move beyond the core search business that has brought it such massive success. That was fine when the search business was expanding at 30% or 40% a year, and Google's revenue was growing at twice that.

Technology - Google casts shadow over new media groups Google is developing technology that could position it to compete with a new breed of digital media companies that are generating story ideas for the internet by mining online search data for under-covered topics. These new digital companies hope to produce content more cheaply than traditional media operations by using statistical analysis to identify topics of interest to consumers and then hiring freelancers to produce relevant stories or videos. However, Google obtained a patent this year for a system that would help it identify “inadequate content” on the internet, based on comparisons of what people search for and what they find, executives who have reviewed the filing, said. The filing said data from the Google system could be sold to online publishers or given away for free, which could complicate the plans of companies such as Demand Media, Associated Content and AOL that are developing systems to generate ideas for internet content using software algorithms.

Marissa Mayer Talks Google Search, Chrome, Online News And More At Le Web TechCrunch’s Mike Arrington this afternoon interviewed Marrissa Mayer, Google’s VP of Search Product and User Experience, at the Le Web conference here in Paris, France. Last year, Arrington interviewed Mayer on stage at Le Web too, and Google took Chrome out of beta that day and talked about Searchwiki. This year, no announcements were made, but Mayer shared her thoughts on all the Google news from earlier this week, including the new releases of the Chrome browser and her views on the future of news. Congratulations on winning the Woman of the Year Award of Glamour Magazine, pretty cool. Yeah, I felt really honored. Let’s start with the news. Yes, of course. Lots of news for one week. Yes, and all of them revolve around four key components: - modality (how do you search) - media (more richness and interactivity, realtime content etc.) - language (translation) - personalizing search experience Last year, you announced Google Searchwiki here at Le Web. You mean kill it? No. Interesting. Yes.

Google search to get speed boost – a good reason to use full text feeds The real time web is showing up just about everywhere these days. Regardless of whether there is any merit of Google, and Bing, incorporating Twitter into their search results it appears that Google could be making a major shift in how it indexes the freshest content available. According to an excellent post by Sarah Perez at ReadWriteWeb, and a post on Google’s Webmaster Central blog, Google is targeting RSS and Atom feeds in order to identify fresh content on web pages. Granted this isn’t the real time search that proponents commonly talk about but it is definitely a much faster method that previously used. It was also hinted at in the Google blog post that t hey are seriously looking at how to use new protocols like PubSubHubbub (try saying that 10 times fast) in order to speed things up even faster. Sarah does point out one major problem that Google is going to have to overcome as they move more in the direction of real time search results – the ranking of those results.

- Minyanville Google ( GOOG ) is preparing to take another bite out of what’s left of the newspaper industry. The Internet giant has extended AdWords to Google News, an application that displays advertisements keyed to topics searched. Type in “mortgage,” and Google serves ads for major lenders, including Bank of America, ING Direct, and Amerisave. The company’s websites include current mortgage rates and links to related sites. In short, Google’s new ads provide depth and service that newspaper ads can’t match. Google announced the new ad service on its blog: “In recent months, we’ve been experimenting with a variety of different formants like overlay ads on embedded videos from partners like AP. Google’s latest effort to develop new sources of revenue in the recession may spark another round of yelps and possibly lawsuits from the newspaper industry. At the time, Google News had no advertising on the site, and therefore no clear source of revenue. Maybe that’s just the nature of the dinosaur.

The Death Of “Web 2.0″ I’m not going to discuss the economic meltdown and its devastating effect on technology companies and internet startups in this post, but rather something that crossed my mind earlier this morning: “Web 2.0″ seems to become more and more a void (and an avoided) term. Of course, that’s not necessarily a bad thing, but it is definitely apparent. So why do I say it’s fading? For one, because the number of startups that contact us and include the term Web 2.0 in the subject line or message is visibly dropping (and that’s a good thing), and I hardly ever see it mentioned anymore on other technology blogs and news sites either. That’s not really tangible, so I took a look at the number of mentions of the phrase across the web, and they seem to be decreasing significantly, reflecting my feeling on this. And just in case you’re curious: “Web 3.0″ doesn’t seem to picking up much. I’ve never had anything against the phrase “Web 2.0″, but I wouldn’t miss it a bit if it were never used again.

Business Model Innovation of Google A business model can be defined as the method of doing business by which revenue can be generated. It is certain that Internet commerce gave rise to new kinds of business models. However, it is also certain that the web is also likely to reinvent well tested models. Google company, starting from just a smart algorithm, has developed a principally new business model, which in a few years turned it into the world leading search engine. Google has taken the risk of introducing a smart, innovative business model of Adwords and the pay per click concept, and this risk proved to be victorious. Today Adwords is the main source of Google’s revenues. Google AdWords product provides the text ads that can be viewed alongside of search results. In the recent years SEO managers have noticed a continuous keyword inflation. Naturally, the increased competition for the best keywords makes prices go up. This is the main reason why Google’s business model proved winning.