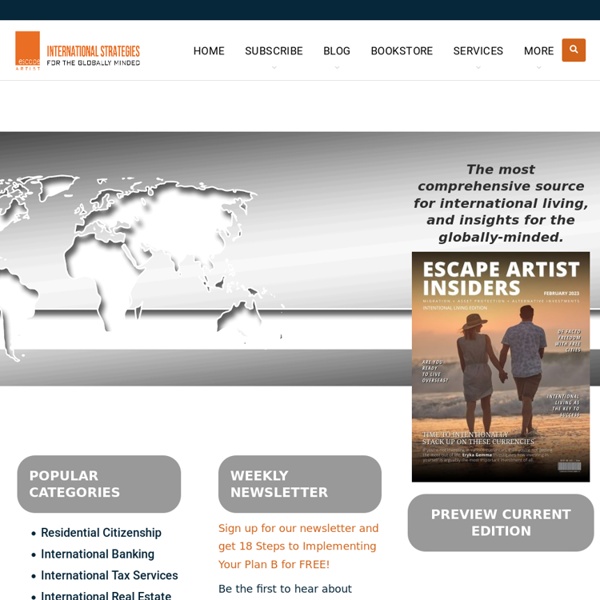 $300 underground greenhouse grows produce year-round, even in severe climates (NaturalNews) With staggering food prices and shortages looming, there's no better time to grow your own produce. Sadly, most greenhouses are expensive to build and impractical to heat during cold, wintery conditions. Thankfully, a solution is found with the Walipini. Developed for South American mountainous regions over twenty years ago, it allows edibles to be grown year-round - even in the most inhospitable weather. To Work Abroad Successfully, Put Down Roots The Benefits of Becoming a Local By Tim Leffel When most people start thinking about working abroad, they generally fall into one of two camps. Those in the first camp plan on securing a solid job before they go. These people intend to spend anywhere from a summer to several years in a foreign place, with a relatively set idea of how they will spend their workdays.

Travelers' Health Salte directo a la búsqueda Salte directo al listado de A-Z Salte directo a la navegación Salte directo al contenido Salte directo a las opciones de la página CDC Home CDC 24/7: Saving Lives. Protecting People The magic EMP-proof box Even though U.S. scientists have known about electromagnetic pulses for quite some time – and, in fact, intentionally created them in the late 1950s and early 1960s during the Cold War – it’s been more recently that EMPs have entered the conversation for ordinary Americans. There is rising concern that a rogue nation or terrorist organization could seriously disrupt our power grids by detonating a nuclear weapon high above the United States or setting off an e-bomb that could do much damage on a more local level. So isn’t it strange that a device with the capability of blocking or at least significantly reducing the effects of an EMP was invented prior to the Civil War? That’s when English scientist Michael Faraday created a cage that blocked external static and non-static electric fields. This enclosure was formed by conducting material or by a mesh of such material.

Government Jobs About 2 million people are employed in a government job, making the federal government America's largest employer. Only 10% of these workers are located in Washington, D.C., the rest work in federal government jobs throughout the United States and overseas. Government employees are hired in just about every career field and in a wide variety of occupations. Awakening: The Next Step 5th June 2015 By Mary Batson Guest Writer for Wake Up World Step 1. Wake up… Step 2. 10 Essential Strength Exercises for Runners We asked our experts to come up with 10 essential strength exercises for runners. Worried about fitting this routine into your training schedule? Don’t worry, these 10 exercises take 30 minutes to complete and can be done twice a week. Try adding them to your easy or cross-training days.

Retire to Australia for the Comforts of Home If you retire to Australia, you’ll find yourself in a country with an economy and lifestyle comparable to that of the United States, making the transition to foreign soil that much easier. However, Australia has a lot to offer in several areas regarding quality of life that even the United States has trouble maintaining in the most desirable areas. The land ‘Down Under’ is a modern, rich nation that is full of beauty with a number of its own natural resources, and a variety of climates tog choose from when you are picking out your home. The Only Way Forward In 2015 By Brandon Turbeville In the year 2015, America and the rest of the world finds itself at a crossroads. The time is fast approaching when the world’s population will receive the final choice between a move toward true freedom or the clampdown of total oppression.

babbel What’s possible in a week? If you dedicated seven days to the achievement of one goal, how ambitious could you make this goal? These were the questions that the multilingual twins Matthew and Michael Youlden posed themselves when they determined to learn Turkish in one week. Retire In Belize - A Subtropical Paradise Why retire in Belize? Belize is a country many may not have heard of,though it offers plenty of opportunity for relaxing in the sun and retiring in pure bliss. The country was formally called British Honduras and is located on the Eastern coast of Central America. For individuals wishing to retire in the Caribbean, Belize retirement may be one of the best choices today. Mexico is just to the north and Guatemala is to the south.

Last Chance Saloon – Gonna Step Up? 5th July 2015 By Zen Gardner Contributing Writer for Wake Up World This is it, folks. Last call. Gonna step up or not? Size Doesn't Matter - But Your Technique Does (For Running, That Is) When I signed up for my first ultramarathon, I started training like crazy. I hired a personal trainer and a strength coach to kick my butt into high gear twice a week. For months I ran, biked, squatted, pressed, lunged, and lifted my way towards ultramarathon fitness. I was in the best shape of my life. Little muscles I didn’t even know existed started popping out and I delighted in making my girlfriends squeal in horror at the size of my flexed quads.