The Brainstorming Process Is B.S. But Can We Rework It? 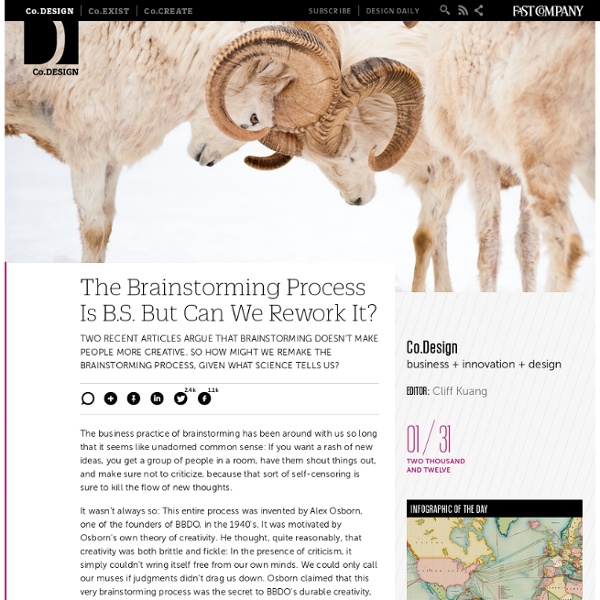 The business practice of brainstorming has been around with us so long that it seems like unadorned common sense: If you want a rash of new ideas, you get a group of people in a room, have them shout things out, and make sure not to criticize, because that sort of self-censoring is sure to kill the flow of new thoughts. It wasn’t always so: This entire process was invented by Alex Osborn, one of the founders of BBDO, in the 1940's. It was motivated by Osborn’s own theory of creativity. He thought, quite reasonably, that creativity was both brittle and fickle: In the presence of criticism, it simply couldn’t wring itself free from our own minds. We could only call our muses if judgments didn’t drag us down. Osborn claimed that this very brainstorming process was the secret to BBDO’s durable creativity, allowing his ad guys to produce as many as 87 ideas in 90 minutes--a veritable avalanche. You’re More Creative Working Alone Lehrer doesn’t quite explain why that happens. Why is that?

Rick Boersma: Saturday afternoon inking... Killing Creativity: Why Kids Draw Pictures of Monsters & Adults Don't | Moments of Genius What's the Big Idea? The Monster Engine is one of the best ideas I’ve come across. It’s a book, demonstration, lecture and gallery exhibition created by Dave Devries. The premise is simple: children draw pictures of monsters and Devries paints them realistically. According to the website, the idea was born in 1998 when Devries took an interest in his niece’s doodles. But Devries had a larger goal: he wanted to always see things as a child. Growing up, to be sure, has its benefits. Age doesn’t necessarily squander our creative juices, but when we make the leap from elementary school to middle school our worldview becomes more realistic and cynical. A study conducted several years ago by Darya Zabelina and Michael Robinson of North Dakota State University gives us a simple remedy. You are 7 years old. The second group was given the same prompt minus the first sentence. Next, the psychologists asked their subjects to take ten minutes to write a response. What's the Significance?

Rick Boersma: Ch 6 p7 #innovation inked... Strategic Questions for an Accelerating World - Colin Raney by Colin Raney | 11:21 AM April 9, 2012 If you feel like the pace of competition is increasing, you’re right. Tectonic shifts in culture and technology over the past decade have rapidly accelerated change in the market. As a result, business strategy today is less about conceiving and executing a brilliant master plan and more about shaping an organization that can quickly launch and learn from smart innovations. 1. 2. 3. 4. 5.

Rick Boersma: Perseverance, the main tal... The Making of an Innovation Master - Scott Anthony by Scott Anthony | 12:01 PM March 23, 2012 A workshop attendee asked me this seemingly simple question: “So, what else should I read to learn more about innovation?” It’s a hard question to answer because there is so much high-quality material out there. And specific recommendations depend on the specific topic about which you are most curious. But in thinking it through, I did eventually end up with a highly personal list I call “The Masters of Innovation” (which appears in my latest book). So what makes a Master? Do the individual’s ideas bring clarity to the quest of improving the predictability and productivity of innovation? These three questions lead to obviously biased selections. There were a ton of great thinkers that didn’t quite make the cut, such as Chip and Dan Heath, Geoffrey Moore, Constantinos Markides, Robert Burgelman, Henry Mintzberg, Gary Hamel, Michael Tushman, W. One natural question is, “Who is next?” 1. 2. 3. 4. 5. 6. 7.

Rick Boersma: #innovation applied to hot... Does Creativity Require Constraints? Research suggests you'd be more creative if I allow your mind to roam free. When people are given the task of imagining alien creatures, most use specific instances (e.g., joe the plumber) as their starting point. This effect is especially pronounced when creatures are described as being intelligent and capable of space travel. Even science fiction writers aren't immune to this effect: content analyses of creatures invented by science fiction writers show striking similarities to animals here on earth: bilateral symmetry, and the presence of legs and eyes represented symmetrically in heads at the tops of bodies. Most science fiction writers aren't all that imaginative! Creativity involves variability— different ways of doing things. In many domains, there are issues that have not yet been resolved, questions that have not yet been posed, and problems that have no obvious solution. What are these constraints? Stokes lists four such constraints.

Rick Boersma: #innovation thru 1-step st... Strategy, Context, and the Decline of Sony - Sohrab Vossoughi by Sohrab Vossoughi | 10:55 AM April 25, 2012 Sometimes it’s useful to be reminded that a great strategy is only great in context. From the early 1980s and into the 90s, Sony’s was great. The unrivaled master of the consumer electronics world, its name was synonymous with cutting-edge technology, sophistication, and desirability. That last statement is still true today, but everything else has changed. Both observations are correct, but they only hint at the underlying question: why is the strategy that once served Sony so well now failing so badly? Part of the shift is technological. This suggests a more fundamental explanation: consumers today care more about the experience, but Sony is still focused on the product. In the experience economy, these expectations are reversed. What’s tragic is that Sony still has all the resources to execute well on a new strategy. What’s missing is the strategic vision to emphasize the delivery of powerful and resonant user experiences.

Rick Boersma: Random related #innovatio... Mental Nimbleness for Executive and How to Enhance It  The more the business environment changes, the faster the value of what you know at any point in time diminishes. In this world, success hinges on the ability to participate in a growing array of knowledge flows in order to rapidly refresh your knowledge stocks. John Hagel, John Seely Brown, Lane Davison While new knowledge flows are important, they are not enough! The illustration below is a New System of Engagement. Seeing new possibilities requires a mindshift–a new way of envisioning what is relevant and meaningful to customers. Netflix, Zappos and Groupon are three great examples of companies who exploited the potential of technology and leveraged the growing number of customers online. The mindshift that underlies companies like Netflix, Zappos and Groupon are far from second nature for most executives. With the pace of change and innovation, especially disruptive innovation, executives with high adaptive potential are critical to their company’s future.

Rick Boersma: Another page of #innovatio...