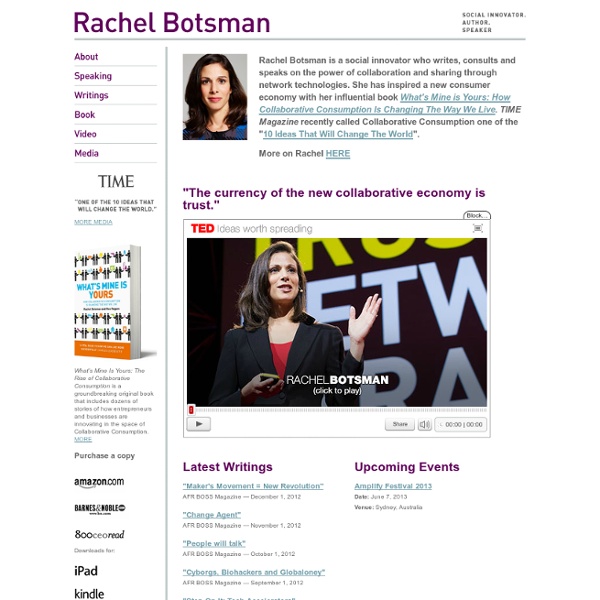 Task & Errand Service By Awesome, Trustworthy People | TaskRabbit Accorderie | Echanger et Coopérer Open Source Ecology Coworking, café internet et location de bureau - Neo Nomade The collaborative economy in your neighborhood: welcome to StreetBank The idea that neighbors can share their resources efficiently is not new, however there are very few examples of successful initiatives to date. Many sharing schemes failed after only a few years. A successful example of such a model is StreetBank, a platform in England that is growing steadily. StreetBank is an online platform that allows neighbors to collectively share items they possess individually. At the time of writing, StreetBank counts 19,000 members in total, mostly in the UK (80%), and has some small groups of members in other countries as well, especially in Washington State, Sydney and Iran. Garage Days The project was self funded for the first 18 months until support was secured from Nesta, which allowed Sam to devote more resources to the project. Building a community The main focus of the project according to Sam is to build trust in the community. The fact is that Priming the Pump StreetBank also allows users to simply give things away as well as share them.

TIPKIN | Je possède. Tu empruntes. Nous partageons ! le site qui récompense l'éco-mobilité Depuis le début de la semaine 175 kg 2404 km Depuis le début du mois 212 kg 5937 km Depuis la création de la communauté 450202 kg 2956997 km Aucune actualité n'a encore été publiée. OuiShare - A Creative Community for the Collaborative Economy CarpoolWorld - Find your perfect carpool! Rideshare! The Freecycle Network On May 1st, 2003, Deron Beal sent out the first e-mail announcing The Freecycle Network™ to about 30 or 40 friends and a handful of nonprofits in Tucson, Arizona. At the time Deron founded The Freecycle Network, he worked with a small nonprofit organization, RISE, which provides recycling services to downtown businesses and transitional employment to Tucsonans in need. As the team recycled, rather than watching perfectly good items being thrown away, they found themselves calling or driving around to see if various local nonprofits could use them. The Freecycle concept has since spread to over 85 countries, where there are thousands of local groups representing millions of of members -- people helping people and 'changing the world one gift at a time.' By giving freely with no strings attached, members of The Freecycle Network help instill a sense of generosity of spirit as they strengthen local community ties and promote environmental sustainability and reuse.

Is Sharing Illegal? In Many Cases, Yes. Governments have their work cut out for them in keeping pace with innovation, especially as mobile, social and cloud technologies allow for new business models that, in the eyes of regulators, threaten consumer safety and incumbent industries. The most poignant current-day example of the tug-of-war between government and technology entrepreneurs is the legal quagmire many “sharing,” or “collaborative consumption,” companies face in the cities they operate. The problem, at least for home- and car-sharing services, is multifaceted: they’re agitating dozens of stakeholders, operating in uncharted territories, and legally indefinable. And indefinable is hard to regulate. You can’t talk about legal issues surrounding ‘sharing’ without talking about the industry’s ‘800-pound gorilla’: home rental service Airbnb. “Government is usually the last one to pick up on innovations,” Turner said. “Policymakers don’t understand that what’s happening to Airbnb is different than before,” Turner said.