The History and Geography of Inventions 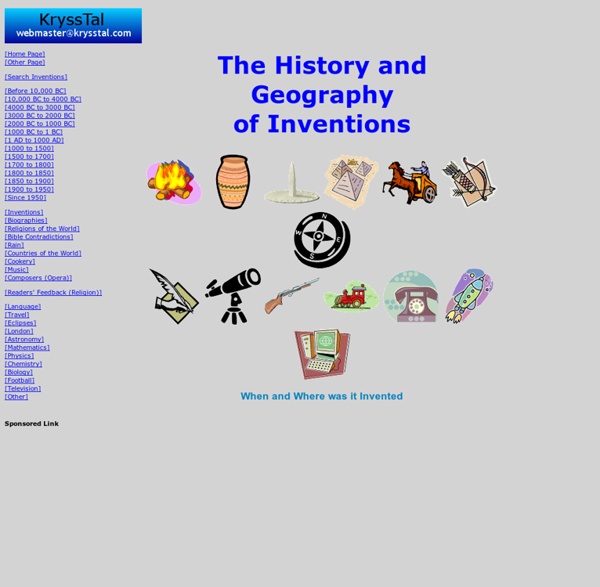 Illuminated Manuscripts from Europe Type Manuscripts Date Around 1200 - 1300 This manuscript consists of a catalog of constellations with many illustrations in red, purple, and beige. The model for this 800-year-old codex might have been a manuscript at the Cistercian Monastery of Zwettl (Codex 296), in which the illustrations of the constellations are similar but are probably even earlier. Arms and Armor-Common Misconceptions and Frequently Asked Questions Parrying dagger (pugnale bolognese), ca. 1550–75 Italian Partly gilt steel, brass, and wood; Wt. 15 oz. (425 g) Gift of Jean Jacques Reubell, in memory of his mother, Julia C. Coster, and of his wife, Adeline E. Post, both of New York City, 1926 (26.145.94) The field of arms and armor is beset with romantic legends, gory myths, and widely held misconceptions.

Human cycles: History as science Sometimes, history really does seem to repeat itself. After the US Civil War, for example, a wave of urban violence fuelled by ethnic and class resentment swept across the country, peaking in about 1870. Internal strife spiked again in around 1920, when race riots, workers' strikes and a surge of anti-Communist feeling led many people to think that revolution was imminent. And in around 1970, unrest crested once more, with violent student demonstrations, political assassinations, riots and terrorism (see 'Cycles of violence'). TIMELINE: Chinese Books, Manuscripts, Maps, and Prints The Xiping Stone Classics These engravings of the seven Confucian classics were set up outside the National University Gate, located on the south side of Loyang, the capital city, in the Eastern Han dynasty. They were created between 175 and 183, after Cai Yong and a group of scholars successfully petitioned the emperor to have the Confucian classics carved in stone in order to prevent their being altered to support particular points of view. They are also called the “Han Stone Classics” and the “Single-Script Stone Classics." The seven classics -- The Book of Changes, The Book of Documents, The Book of Poetry, The Rites, The Spring and Autumn Annals, The Gongyang Tradition, and The Analects – were copied and engraved in the standard clerical script of the Han period.

Inflation and the Fall of the Roman Empire - Joseph R. Peden [This is a transcript of Professor Joseph Peden's 50-minute lecture "Inflation and the Fall of the Roman Empire," given at the Seminar on Money and Government in Houston, Texas, on October 27, 1984. The original audio recording is available as a free MP3 download.] Two centuries ago, in 1776, there were two books published in England, both of which are read avidly today. Eshnunna Coordinates: 33°29′3″N 44°43′42″E﻿ / ﻿33.48417°N 44.72833°E﻿ / 33.48417; 44.72833 Eshnunna (modern Tell Asmar in Diyala Province, Iraq) was an ancient Sumerian (and later Akkadian) city and city-state in central Mesopotamia. Although situated in the Diyala Valley north-east of Sumer proper, the city nonetheless belonged securely within the Sumerian cultural milieu. The tutelary deity of the city was Tishpak (Tišpak). History[edit]

TIMELINE: World History First date on the Maya calendar Only four Mayan manuscripts still exist worldwide, of which the oldest and best preserved is the Dresden Codex, held in the collections of the Saxon State and University Library. The manuscript was purchased for the Dresden court library in 1739 in Vienna, as a “Mexican book.” In 1853 it was identified as a Mayan manuscript. Consisting of 39 leaves, inscribed on both sides, and approximately 358 centimeters long, the manuscript originally was folded in an accordion-like manner. The chalk-coated writing material, amatl, is a paper-like matter produced from fig-tree fiber by means of soaking and beating.

Revisionism and the Historical Blackout - Harry Elmer Barnes [Chapter 1 of Perpetual War for Perpetual Peace, 1953] The First World War and American intervention therein marked an ominous turning point in the history of the United States and of the world. Those who can remember "the good old days" before 1914 inevitably look back to those times with a very definite and justifiable feeling of nostalgia. ancient maps home page Down to: 6th to 15th Centuries | 16th and 19th Centuries | 1901 to World War Two | 1946 to 21st Century The Ancient World ... index of places MAP: Imperial Russia By the middle of the 19th century, the Russian Empire comprised more than 15 percent of the Earth’s land mass spanning parts of three continents, Europe, Asia, and North America. The population of the empire included not only Russians, but also Ukrainians, Belarusians, Finns, Poles, Armenians, Azerbaijanis, Tatars, Uzbeks, Kazakhs, Germans, and many other ethnic, linguistic, and religious groups. Russians were proud of the empire and used various means to celebrate its scale and diversity. Presented here are two sets of cards, circa 1800-33 and 1856, in which each card corresponds to a particular province or other administrative subdivision of the empire.

List of unusual deaths - Wikipedia, the free encyclopedia - StumbleUpon This is a list of unusual deaths. This list includes unique or extremely rare circumstances of death recorded throughout history, noted as being unusual by multiple sources. Some of the deaths are mythological or are considered to be unsubstantiated by contemporary researchers. Oxford Dictionaries defines the word "unusual" as "not habitually or commonly occurring or done" and "remarkable or interesting because different from or better than others.

Sacred Texts Timeline Sacred-textsSacred Time Origins of World Religions This is a timeline which gives the history of sacred texts, as well as a few other relevant events. Of course, not all of the dates in this timeline are accurate; some are entirely conjectural. I have included a few dates, events and documents which are or may be entirely fictional. Links on this page are to resources at this site, not to external sites.