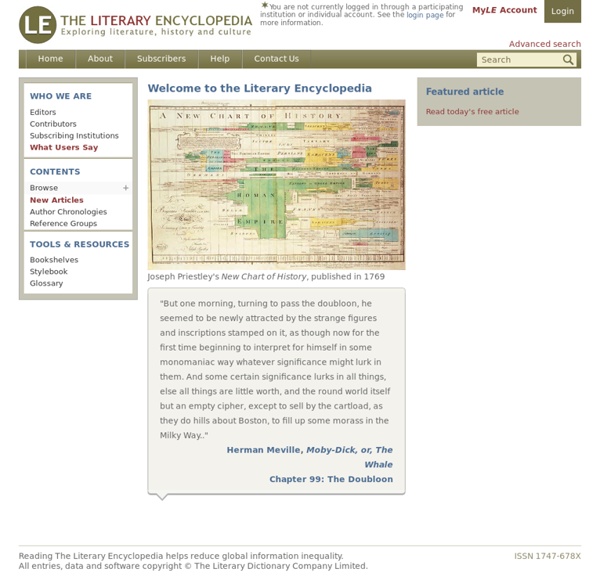 The Encyclopedia of Psychology Submit to Add Your Site If you have a resource you feel should be listed, please use this form to have it approved. We individually review each submission, so be sure to fill in every field to expedite the process. Should your resource pass muster, we will notify you of our plans to post it. Vincent van Gogh 10 facts (and a video) on the prolific genius who died a relatively unknown artist. 1. Vincent van Gogh was born on March 30, 1853, in Groot-Zundert, Netherlands. He was named after his grandfather and his stillborn brother who died one year before Van Gogh was born. 2. Van Gogh was 27 years old when he painted his first piece.

America's Justice System James Holmes walked into a midnight screening of The Dark Knight Rises in 2012 carrying three guns including a semi-automatic rifle and opened fire, killing 12 people and injuring 70 more. Nobody, not even his defense attorneys, denied that. But those attorneys still told a jury and a judge that Holmes was not guilty of those crimes—because he was insane. MathEduc MathEduc (formerly MATHDI) is the only international reference database offering a world-wide overview of literature on research, theory and practice in mathematics education. MathEduc also covers education in computer science on the elementary level. The scope includes literature for all school levels up to university education, teacher education, general and vocational education. About 500 journals from all over the world are evaluated as well as books and teaching material. MathEduc is edited by Gesellschaft für Didaktik der Mathematik (GDM), the European Mathematical Society and Fachinformationszentrum Karlsruhe in cooperation with The International Commission on Mathematical Instruction (ICMI), Editorial Unit Debrecen Zentralblatt MATH, Hungary; ERIC, USA; FIS Bildung, Germany; GPNTP, Russia; Pädagogische Fakultät Karls-Universität Prague, Czechia; PUBLIMATH, France; SANU, Serbia; SEIEM, Spain.

Search Engines:Encyclopedias From Topical Search Wiki Open Licensed Academic The Collection of Computer Science Bibliographies About the Collection This is a collection of bibliographies of scientific literature in computer science from various sources, covering most aspects of computer science. The bibliographies are updated weekly from their original locations such that you'll always find the most recent versions here. The collection currently contains more than 3 millions of references (mostly to journal articles, conference papers and technical reports), clustered in about 1500 bibliographies, and consists of more than 2.3 GBytes (530MB gzipped) of BibTeX entries.

Search Engines Posted on Tuesday July 22, 2008 by Staff Writers Students, teachers and the public turn to their librarians for help researching everything from technology to genealogy to homework help and lesson plans. Even if your library is equipped with subscriptions and memberships to top of the line databases and online journals, you’ve probably had to get creative during a patron’s requested search for something unfamiliar. Next time, though, you can turn to one of these 50 search engines, designed to pull from the Web only the information you really need. Meta Search and Multi Search Engines Search Engines June 20th, 2010 Finding the information you need as a writer shouldn’t be a chore. Luckily, there are plenty of search engines out there that are designed to help you at any stage of the process, from coming up with great ideas to finding a publisher to get your work into print. Both writers still in college and those on their way to professional success will appreciate this list of useful search applications that are great from making writing a little easier and more efficient. Professional

Alexander Street Welcome to MediaPlus from Alexander Street. You have been redirected here from the former Jisc MediaHub subscription service, which was retired on 31 August 2016. MediaPlus will now be hosted and delivered to existing and new subscribers by Alexander Street, the leading provider of academic streaming media. All Jisc-licensed news, film, image and music content including high profile collections such as ITN, Getty images and Wellcome Library images and sound will be available, but new content, services and benefits will also be included, hence the name MediaPlus. Jisc-owned content will be loaded onto MediaPlus gradually, with highest-use content such as ITN News being released first. Over the coming weeks, all videos, images and audio recordings licensed by Jisc will be released on the new service, and service updates will be communicated regularly.