Encyclopedia of Death and Dying 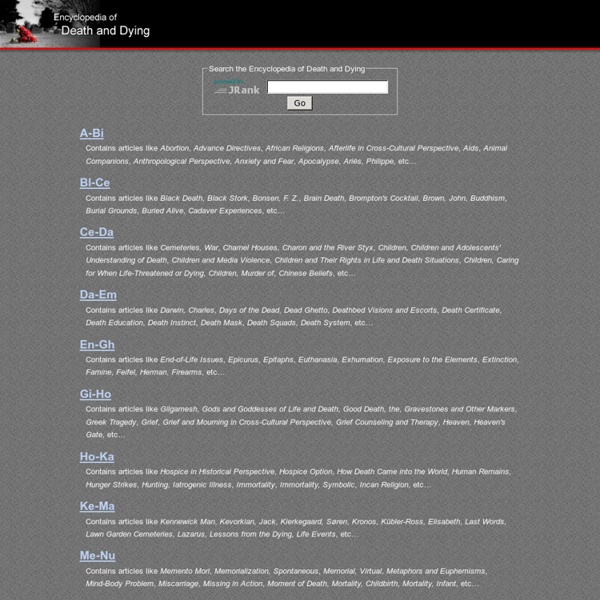 Related:  RIP (and back again)

Literary Encyclopedia | Welcome WHO accused of huge HIV blunder - 03 December 2003 Read full article Continue reading page |1|2 The positive HIV test was a surprise. The boy let's call him Sipho - never had a blood transfusion. He did not inject drugs or have unprotected sex. The natural assumption was that he must have picked up the disease from his mother in the womb, but her HIV test came back negative. The World Health Organization thinks that tragedies like Sipho's are very much the exception. But some researchers believe the role of dirty needles has been greatly underestimated. This week, the group Physicians for Human Rights based in Washington DC sent an open letter to the WHO and UNAIDS. 'Firestorm of protest' But the WHO and UNAIDS have long resisted the suggestion that injections are an important driver of the epidemic. "The worry is that if too much attention is paid to unsafe injections it will take away from the message about sexual transmission," says James Whitworth at the London School of Hygiene and Tropical Medicine, who backs the WHO position.

Simon Critchley on the History of Death (transcript) Transcript Question: How do contemporary societies conceive of death? Critchley: Every culture has had rituals around death, all right. Question: How did the Greeks conceive of death? Critchley: Philosophy begins with Plato, with Plato’s transcriptions of these dialogues. The Conversation: In-depth analysis, research, news and ideas from leading academics and researchers.

Biocentrism Explains Why There’s No Time and No Death Okay, I admit it. They had me at “You won’t actually die.” I want to believe. The idea sprang from Lanza’s observation of a spider monitoring its web. In a column Lanza and Berman wrote for Aeon, they say “It turns out that everything we see and experience is a whirl of information occurring in our head… Rather, space and time are the tools our mind uses to put it all together.” The authors cite a range of intellectual luminaries who themselves had doubts about times’ reality, including Albert Einstein, who wrote on the passing of his friend Michele Besso, “Now he has departed from this strange world a little ahead of me. British physicist Julian Barbour also says time isn't real: “Quite the contrary, time is an abstraction at which we arrive through the changes of things.” In biocentrism, we could think of time like a CD music album: All the music’s all there all the time; the only thing that changes, essentially, is which song we listen to. Headline image: Phillip Pessar

Related:
Related:  RIP (and back again)