Node-RED : Upgrading. Currently we recommend the use of npm version 2 or 3, (4 is NOT recommended), please check which version you have installed by running the command npm -v before upgrading. 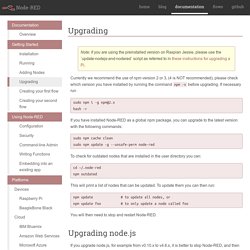 If necessary run sudo npm i -g npm@2.x hash -r If you have installed Node-RED as a global npm package, you can upgrade to the latest version with the following commands: The JavaScript Database that Syncs! Groups. Raspberry Pi Hosting Node-Red. Node-Red is great out of the box but it can be a bit manual to start, stop and run on boot. 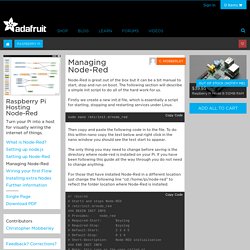 The following section will describe a simple init script to do all of the hard work for us. Firstly we create a new init.d file, which is essentially a script for starting, stopping and restarting services under Linux. sudo nano /etc/init.d/node_red sudo nano /etc/init.d/node_red Then copy and paste the following code in to the file. Node.js. Node-RED : Installation. Install Node.js Node-RED requires version 0.10.x of Node.js. 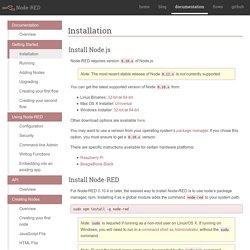 Note: The most recent stable release of Node 0.12.x is not currently supported. You can get the latest supported version of Node 0.10.x from: Linux Binaries: 32-bit or 64-bit Max OS X Installer: Universal Windows Installer: 32-bit or 64-bit Other download options are available here. You may want to use a version from your operating system’s package manager. There are specific instructions available for certain hardware platforms: Node-RED (NodeRED) Node-RED. Node-RED. Node-RED.

Node-RED. The purpose of this flow is to give a early warning of overnight frosts, which for me as a keen gardener allows me to protect tender plants and prevent frost damage, but also to set my alarm clock 15 minutes earlier to clear my windscreen in the morning! 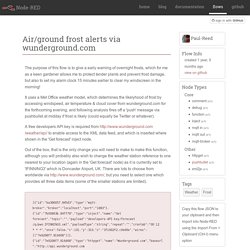 It uses a Met Office weather model, which determines the likelyhood of frost by accessing windspeed, air temperature & cloud cover from wunderground.com for the forthcoming evening, and following analysis fires off a 'push' message via pushbullet at midday if frost is likely (could equally be Twitter or whatever). A free developers API key is required from to enable access to the XML data feed, and which is inserted where shown in the 'Get forecast' inject node.

Node-RED. Learning System. Raspberry Pi Hosting Node-Red. Before delving into the more advanced ways of using Node-Red it's worth understanding the fundamentals of how the systems works. 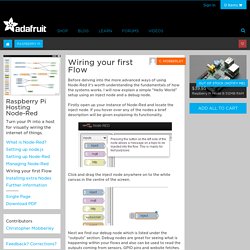 I will now explain a simple "Hello World" setup using an inject node and a debug node. Firstly open up your instance of Node-Red and locate the inject node. If you hover over any of the nodes a brief description will be given explaining its functionality. Click and drag the inject node anywhere on to the white canvas in the centre of the screen. Next we find our debug node which is listed under the "outputs" section. Drag the debug node on to the canvas near to your input node.

Now you can see that the inject node is an input and therefore has a small grey circle on its right hand side. As you begin to drag you are creating a "wire" between the two nodes. It is worth noting that you can have multiple wires going in to a node. Deploying simply means allowing the system to update so that it is ready to execute the code within your nodes. Raspberry Pi Hosting Node-Red – Take the crap out of developing automation! – The Internet Of Things IOT - RASPBERRY PI. This tutorial will document setting up Node-Red on your Raspberry Pi and getting some of your first automation tasks set up! 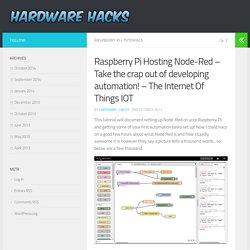 Now I could harp on a good few hours about what Node Red is and how stupidly awesome it is however they say a picture tells a thousand words.. so below are a few thousand. So as you can see.. its graphical, its easy and its developed by cool guys at IBM..need I say more? Well probably so here is the official take on what Node Red actually is: A visual tool for wiring the internet of things Yes we need more.. so read here.Now that the initial blurb has been given its time to get in to the tutorial. Firstly SSH in to your Pi which will hopefully be running Raspbian or something similar. For the Pi it has been a pain in the past to get Node.js running but luckily there have been some tweaks made by the clever people out there that make our lives easier. As always get the new versions of everything… sudo apt-get update sudo apt-get upgrade Then.. wget.

Node-RED. Node-red/node-red-nodes. Quick Connections for MongoDB with Node-RED. After last week’s blog post where we connected an Internet of Things temperature sensor to record data in MongoHQ’s MongoDB instances, one Twitter follower commented that it would have been even easier if we had used Node-RED. 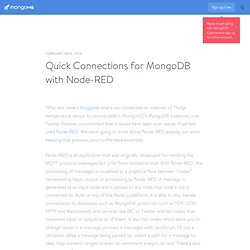