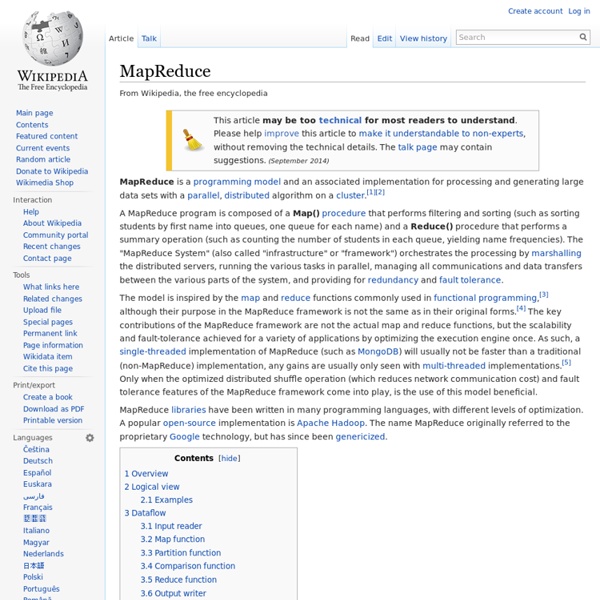 Overview[edit] MapReduce is a framework for processing parallelizable problems across huge datasets using a large number of computers (nodes), collectively referred to as a cluster (if all nodes are on the same local network and use similar hardware) or a grid (if the nodes are shared across geographically and administratively distributed systems, and use more heterogenous hardware). Processing can occur on data stored either in a filesystem (unstructured) or in a database (structured). MapReduce can take advantage of locality of data, processing it on or near the storage assets in order to reduce the distance over which it must be transmitted. "Map" step: Each worker node applies the "map()" function to the local data, and writes the output to a temporary storage. MapReduce allows for distributed processing of the map and reduction operations. Another way to look at MapReduce is as a 5-step parallel and distributed computation: Logical view[edit] Map(k1,v1) → list(k2,v2) Examples[edit] Related:  voidhaze

Networks In mathematical terms, a network is a graph in which the nodes and edges have values associated with them. A graph is defined as a pair of sets , where is a set of nodes (vertices or points within the graph) labelled and is a set of edges (links (vi, vj ) that connect pairs of elements vi, vj within ). The degree to which the nodes of a network are directly connected is called connectivity. is the number of edges and is the number of nodes in the network, the following equation is used; The degree of a node in a network is the number of edges or connections to that node (Newman 2003). Shortest average path length The average path length, ( ) of a network is the average number of edges, or connections between nodes, that must be crossed in the shortest path between any 2 nodes (Watts 2003). where is the minimum distance between nodes i and j. The diameter of a network is the longest shortest path within a network. A common property of many social networks is cliques. consisting of the set of nodes

Higher-Order Perl Secure coding Securing coding is the practice of developing computer software in a way that guards against the accidental introduction of security vulnerabilities. Defects, bugs and logic flaws are consistently the primary cause of commonly exploited software vulnerabilities. Through the analysis of thousands of reported vulnerabilities, security professionals have discovered that most vulnerabilities stem from a relatively small number of common software programming errors. See also[edit] References[edit] Welcome to Apache Pig! Baking Pi - Operating Systems Development This course has not yet been updated to work with the Raspberry Pi models B+ and A+. Some elements may not work, in particular the first few lessons about the LED. It has also not been updated for Raspberry Pi v2. Welcome to Baking Pi: Operating Systems Development! You can now help contribute to this tutorial on GitHub. This website is here to guide you through the process of developing very basic operating systems on the Raspberry Pi! This course takes you through the basics of operating systems development in assembly code. Rather than leading the reader through the full details of creating an Operating System, these tutorials focus on achieving a few common tasks separately. 1 Requirements 1.1 Hardware In order to complete this course you will need a Raspberry Pi with an SD card and power supply. 1.2 Software In terms of software, you require a GNU compiler toolchain that targets ARMv6 processors. 2 Lessons

Security Security is the degree of resistance to, or protection from, harm. It applies to any vulnerable and valuable asset, such as a person, dwelling, community, nation, or organization. As noted by the Institute for Security and Open Methodologies (ISECOM) in the OSSTMM 3, security provides "a form of protection where a separation is created between the assets and the threat." Perceived security compared to real security[edit] Perception of security may be poorly mapped to measureable objective security. Security theater is a critical term for deployment of measures primarily aimed at raising subjective security without a genuine or commensurate concern for the effects of that measure on objective security. Perception of security can increase objective security when it affects or deters malicious behavior, as with visual signs of security protections, such as video surveillance, alarm systems in a home, or an anti-theft system in a car such as a vehicle tracking system or warning sign. Safety

Google File System Google File System (GFS or GoogleFS) is a proprietary distributed file system developed by Google for its own use. It is designed to provide efficient, reliable access to data using large clusters of commodity hardware. A new version of the Google File System is codenamed Colossus.[2] Design[edit] Google File System. A GFS cluster consists of multiple nodes. The Master server doesn't usually store the actual chunks, but rather all the metadata associated with the chunks, such as the tables mapping the 64-bit labels to chunk locations and the files they make up, the locations of the copies of the chunks, what processes are reading or writing to a particular chunk, or taking a "snapshot" of the chunk pursuant to replicate it (usually at the instigation of the Master server, when, due to node failures, the number of copies of a chunk has fallen beneath the set number). Performance[edit] See also[edit] References[edit] Bibliography[edit] External links[edit]

PDF, Let Me Count the Ways… In this post, I show how basic features of the PDF language can be used to generate polymorphic variants of (malicious) PDF documents. If you code a PDF parser, write signatures (AV, IDS, …) or analyze (malicious) PDF documents, you should to be aware of these features. Official language specifications are interesting documents, I used to read them from front to back. I especially appreciate the inclusion of a formal language description, for example in Backus–Naur form. But nowadays, I don’t take the time to do this anymore. While browsing through the official PDF documentation, I took particular interest in the rules to express lexemes. Building a test file Before I show some examples, let’s build a test PDF file that will start the default browser and navigate to a site each time the document is opened. Opening a web page from a PDF file can be done with an URI action, like this: This is the same type of object used in the malicious mailto PDF files. Name representation Or #55#52#49

NLM APIs An Application Programming Interface (API) is a set of routines that an application uses to request and carry out lower-level services performed by a computer's operating system. For computers running a graphical user interface, an API manages an application's windows, icons, menus, and dialog boxes. We invite you to develop computer and mobile applications using National Library of Medicine (NLM) resources. We request that any application that makes use of NLM data include the following statement: "This product uses publicly available data from the U.S. Developers may not use the NLM name and/or logo in conjunction with their applications. Supported NLM APIs are listed below, along with information about any additional terms and conditions of use. We encourage comments and recommendations for further API development to NLM customer service. More data resources are available at the Databases, Resources & APIs page. Upcoming Events Event Archive Discussion slides are available for download.