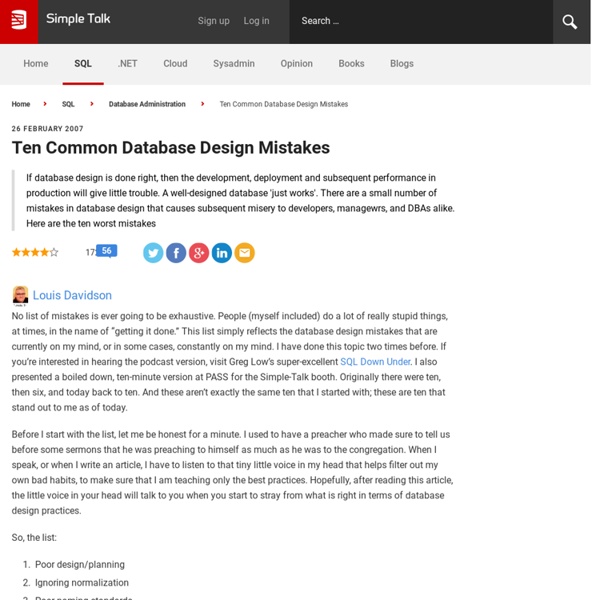 No list of mistakes is ever going to be exhaustive. People (myself included) do a lot of really stupid things, at times, in the name of “getting it done.” This list simply reflects the database design mistakes that are currently on my mind, or in some cases, constantly on my mind. I have done this topic two times before. If you’re interested in hearing the podcast version, visit Greg Low’s super-excellent SQL Down Under. I also presented a boiled down, ten-minute version at PASS for the Simple-Talk booth. Before I start with the list, let me be honest for a minute. So, the list: Poor design/planning Ignoring normalization Poor naming standards Lack of documentation One table to hold all domain values Using identity/guid columns as your only key Not using SQL facilities to protect data integrity Not using stored procedures to access data Trying to build generic objects Lack of testing Poor design/planning Ignoring Normalization Are there always 12 payments? Poor naming standards Security

Five simple database design tips A flawed database can affect all areas of your application, so getting the design right is of paramount importance. Check out Builder's five simple design tips, and share some of your own. If an enterprise’s data is its lifeblood, then the database design can be the most important part of an application. Volumes have been written on this topic, and entire college degrees have been built around it. However, as has been said time and time again here on Builder.com, there’s no teacher like experience. I’ll get the show started by listing my five favorite tips and giving a brief explanation of the rationale behind each one.

What is database Main » TERM » D » By Vangie Beal (1) Often abbreviated DB, a database is basically a collection of information organized in such a way that a computer program can quickly select desired pieces of data. Unity 3 – April 2013 patterns & practices Developer Center April 2013 Unity is a lightweight, extensible dependency injection container with support for instance and type interception.

Relational database In the relational model, each table schema must identify a column or group of columns, called the primary key, to uniquely identify each row. A relationship can then be established between each row in the table and a row in another table by creating a foreign key, a column or group of columns in one table that points to the primary key of another table. The relational model offers various levels of refinement of table organization and reorganization called database normalization. (See Normalization below.) Audit and document Security User Rights Assignment using C# For more information on the Windows Server documentation abilities of XIA Configuration please see the following We've recently been asked about the auditing of User Rights Assignment as seen in the Local Group Policy Editor. Having looked into this issue it is apparent that this cannot be done with any high level API such as WMI and requires the use of P/Invoke and the Win32 method LsaEnumerateAccountsWithUserRight. I've seen many posts on the Internet on the topic but I haven't seen a simplified example of this in use so have writen a quick C# sample application to enumerate the various rights and privileges and display the users assigned to that right in a grouped listview as per the screenshot below.

TokyoBound Ito Seiyu (1882-1961) has been pushing the envelope of kinbaku and torture imagery long before the “Golden Age” of SM magazines, getting some of his better work censored and banned by the authorities, earning him the label of “pervert”. To help you better appreciate this series, first read the following notes on the kanji characters heading each picture and text: Wood (木, ki), Fire (火, hi), Earth (土, tsuchi), Metal (金, kin), and Water (水, mizu) are the “five elements” called Wu Xing (五行) in Chinese. Your Personal PLC Tutor Site - RS232 Communications/software Learn quickly with our PLC Training DVD Series: on sale $599.00 $379 Click here now for details! RS-232 Communications (software) Now that we understand the hardware part of the picture, let's dive right into the software part.

Two Knotty Boys Instructional Video Set for Download Two Knotty Boys are rope bondage riggers and instructors known worldwide for their commonsense-yet-whimsical style, as well as for clear, concise, well-narrated book and video instruction. While their books are available for sale, they have made their videos available free to the public for many years through whatever servers would carry them, most recently YouTube. In September 2008, YouTube suspended the TKB account, citing "flagging" by other users for content, even though these instructional videos show absolutely no nudity or violence of any kind. Most don't even include a model at all - they're all about the rope.