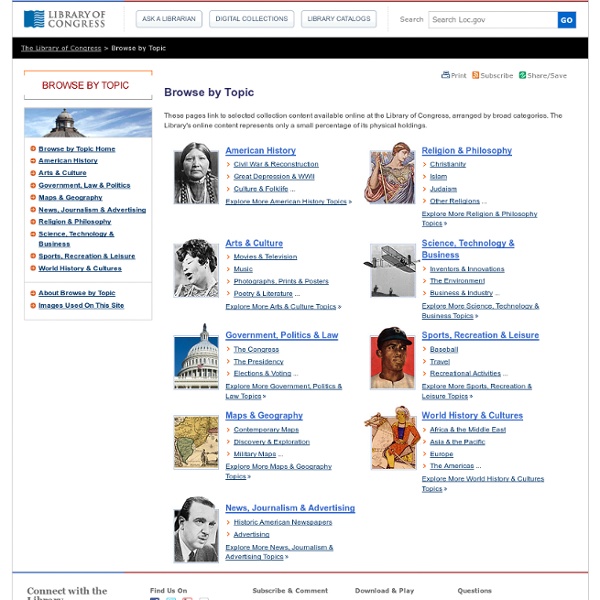 The 101 Most Useful Websites on the Internet Here are the most useful websites on the Internet that will make you smarter, increase productivity and help you learn new skills. These incredibly useful websites solve at least one problem really well. And they all have cool URLs that are easy to memorize thus saving you a trip to Google. Also see: The Best Android Apps 100 Years of Conflict We compiled this piece to explain the key global events of the last 100 years to coincide with the centenary of World War One. We’ve used a variety of graphics, timelines and data visualisations to explain the chain link of events that lead us to global politics as they are today. If you want to make further suggestions on what we can work in, let us know on the comments. By 1914 Europe was divided by two major Alliance systems: The Triple Alliance between Germany, Austria Hungary and Italy and the Triple Entente, between France, Russia and Great Britain.

Free Genealogy Resources - Home How to find family records using the best free Internet resources Bookmark This Site (Ctrl+D) There are literally millions of web pages on genealogy and it is easy to get lost so that you can't see the forest for the trees. Where do you go first? Let's look at the sites that are likely to give you quick and easy results. To the left you will find links to the most important British American genealogy web sites. Go

REVEALED: Hundreds of words to avoid using online if you don't want the government spying on you Department of Homeland Security forced to release list following freedom of information requestAgency insists it only looks for evidence of genuine threats to the U.S. and not for signs of general dissent By Daniel Miller Published: 09:32 GMT, 26 May 2012 | Updated: 17:46 GMT, 26 May 2012 Revealing: A list of keywords used by government analysts to scour the internet for evidence of threats to the U.S. was released under the Freedom of Information Act The Department of Homeland Security has been forced to release a list of keywords and phrases it uses to monitor social networking sites and online media for signs of terrorist or other threats against the U.S. The intriguing the list includes obvious choices such as 'attack', 'Al Qaeda', 'terrorism' and 'dirty bomb' alongside dozens of seemingly innocent words like 'pork', 'cloud', 'team' and 'Mexico'.

World War II and the Holocaust The Holocaust was the state-sponsored, systematic persecution and annihilation of European Jewry by Nazi Germany and its collaborators, between 1933 and 1945. Jews were the primary victims - six million were murdered. Roma (Gypsies), physically and mentally disabled people and Poles were also targeted for destruction or decimation for racial, ethnic, or national reasons. Heartbleed bug: Check which sites have been patched The Heartbleed bug is serious. Disclosed less than two days ago, the Heartbleed bug has sent sites and services across the Internet into patch mode. For an in-depth explanation of what exactly Heartbleed is, and what it does, read this post by our own Stephen Shankland. In essence, the bug potentially exposed your username and password on sites like Facebook, Google, Pinterest, and more.

World War I Timeline Timelines are one of our favorite history tools and an important element of the Layers of Learning curriculum. Here are some WWI events to add to a timeline. You may find more from your reading. You can put the timeline squares on a wall or in a notebook. And here is the set of printable World War I Timeline squares. A Little History 80+ Best Free Hacking Tutorials Learning to become hacker is not as easy as learning to become a software developer. I realized this when I started looking for learning resources for simple hacking people do. Even to start doing the simplest hack on own, a hacker requires to have in depth knowledge of multiple topics. Some people recommend minimum knowledge of few programming languages like C, Python, HTML with Unix operating system concepts and networking knowledge is required to start learning hacking techniques. Though knowing a lot of things is required, it is not really enough for you to be a competent and successful hacker.