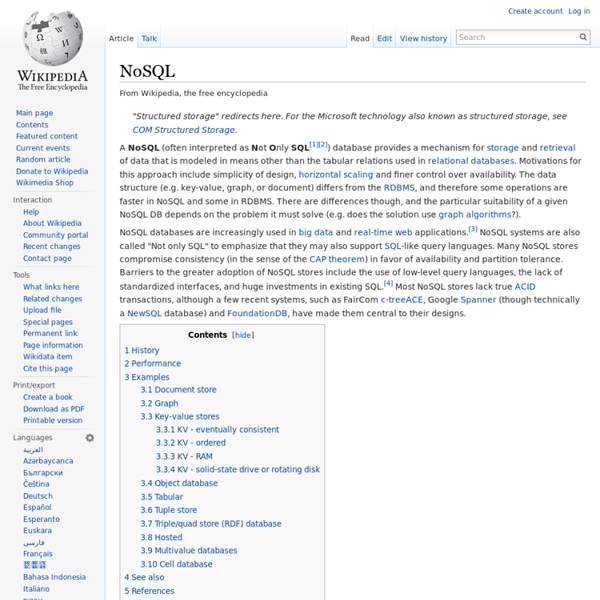 "Structured storage" redirects here. For the Microsoft technology also known as structured storage, see COM Structured Storage. A NoSQL (often interpreted as Not Only SQL[1][2]) database provides a mechanism for storage and retrieval of data that is modeled in means other than the tabular relations used in relational databases. Motivations for this approach include simplicity of design, horizontal scaling and finer control over availability. The data structure (e.g. key-value, graph, or document) differs from the RDBMS, and therefore some operations are faster in NoSQL and some in RDBMS. There are differences though, and the particular suitability of a given NoSQL DB depends on the problem it must solve (e.g. does the solution use graph algorithms?). History[edit] There have been various approaches to classify NoSQL databases, each with different categories and subcategories. A more detailed classification is the following, by Stephen Yen:[9] Performance[edit] Examples[edit] Graph[edit]

Anti-database movement gains steam The meet-up in San Francisco last month had a whiff of revolution about it, like a latter-day techie version of the American Patriots planning the Boston Tea Party. The inaugural get-together of the burgeoning NoSQL community crammed 150 attendees into a meeting room at CBS Interactive. Like the Patriots, who rebelled against Britain's heavy taxes, NoSQLers came to share how they had overthrown the tyranny of slow, expensive relational databases in favor of more efficient and cheaper ways of managing data. "Relational databases give you too much. They force you to twist your object data to fit a RDBMS [relational database management system]," said Jon Travis, principal engineer at Java toolmaker SpringSource, one of the 10 presenters at the NoSQL confab (PDF). NoSQL-based alternatives "just give you what you need," Travis said.

Solar cell research There are currently many research groups active in the field of photovoltaics in universities and research institutions around the world. This research can be divided into three areas: making current technology solar cells cheaper and/or more efficient to effectively compete with other energy sources; developing new technologies based on new solar cell architectural designs; and developing new materials to serve as light absorbers and charge carriers. Silicon processing[edit] One way of reducing the cost is to develop cheaper methods of obtaining silicon that is sufficiently pure. NoSQL Databases Explained NoSQL encompasses a wide variety of different database technologies and were developed in response to a rise in the volume of data stored about users, objects and products, the frequency in which this data is accessed, and performance and processing needs. Relational databases, on the other hand, were not designed to cope with the scale and agility challenges that face modern applications, nor were they built to take advantage of the cheap storage and processing power available today. Document databases pair each key with a complex data structure known as a document. Documents can contain many different key-value pairs, or key-array pairs, or even nested documents.Graph stores are used to store information about networks, such as social connections.

Home · tinkerpop/blueprints Wiki Blueprints is a collection of interfaces, implementations, ouplementations, and test suites for the property graph data model. Blueprints is analogous to the JDBC, but for graph databases. As such, it provides a common set of interfaces to allow developers to plug-and-play their graph database backend. Kyoto Cabinet: a straightforward implementation of DBM Copyright (C) 2009-2012 FAL Labs Last Update: Fri, 04 Mar 2011 23:07:26 -0800 Overview Kyoto Cabinet is a library of routines for managing a database. The database is a simple data file containing records, each is a pair of a key and a value. Cassandra & Twitter There have been confirmed rumors about Twitter planning to use Cassandra for a long time. But except the mentioned post, I couldn’t find any other references. Twitter is fun by itself and we all know that NoSQL projects love Twitter.

Got SPAM? I don’t, thanks to GFI Max MailEdge Security is all about adding on layers, like an onion, or an ogre, to establish what is called a defence in depth approach. The more layers of security a bad guy must penetrate, the less likely he will succeed, the more likely you will detect him, and unless you are the specific target of the attack, they may just move on to easier pickings. Email is often what I like to call a drive-by shooting victim…spam, phishing attacks, and malware are not so much targeted at your company as they are at your users inboxes. In is not personal; they just happened to leave their email.addr out somewhere that got noticed. Exchange systems have a lot of options for screening incoming mail.

Oracle NoSQL Database Technical Overview The Oracle NoSQL Database is a distributed key-value database. It is designed to provide highly reliable, scalable and available data storage across a configurable set of systems that function as storage nodes. Data is stored as key-value pairs, which are written to particular storage node(s), based on the hashed value of the primary key. Storage nodes are replicated to ensure high availability, rapid failover in the event of a node failure and optimal load balancing of queries. Home · tinkerpop/pipes Wiki Pipes is a dataflow framework using process graphs. A process graph is composed of Pipe vertices connected by communication edges. A Pipe implements a simple computational step that can be composed with other Pipe objects to create a larger computation. Such data flow graphs allow for the splitting, merging, looping, and in general, the transformation of data from input to output. There are numerous Pipe classes that come with the main Pipes distribution.