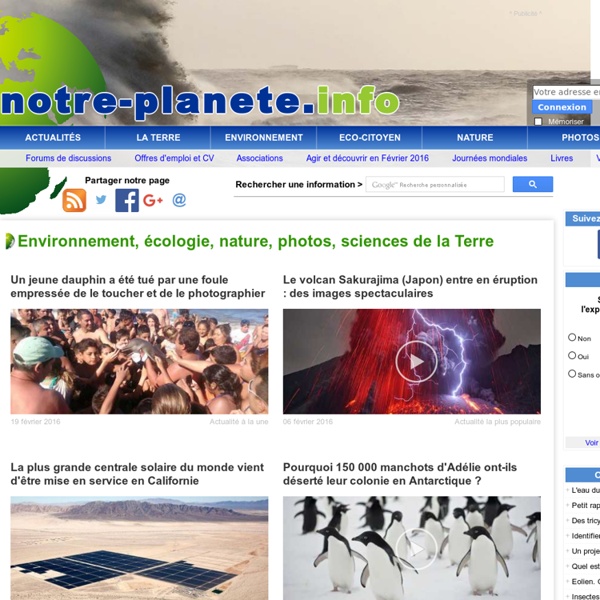 5 Signs the World is Really Ending The end of the world is just around the corner — on the 21st of December — marking the end of the 5,125-year “Long Count” Mayan calendar. Panicking Russians and Chinese have been buying up candles (because the world’s end means we’ll be in the dark) while Americans are apparently snatching up survival shelters. Pedro Celestino Yac Noj, a Mayan sage, is far more relaxed about the matter. What Humans Are Really Doing to Our Planet, in 19 Jaw-Dropping Images Last week, Pope Francis and church officials encouraged everyone to consume less and think more about our impact on the environment. It's a timely warning because the next six months will be critical to our future. Ahead of a series of major events later this year, The Foundation for Deep Ecology and the Population Media Center released a collection that illustrates the devastating effects of out-of-control growth and waste, and it's breathtaking.

Discover the world's most endangered species Wildscreen's Arkive project was launched in 2003 and grew to become the world's biggest encyclopaedia of life on Earth. With the help of over 7,000 of the world’s best wildlife filmmakers and photographers, conservationists and scientists, Arkive.org featured multi-media fact-files for more than 16,000 endangered species. Freely accessible to everyone, over half a million people every month, from over 200 countries, used Arkive to learn and discover the wonders of the natural world. Since 2013 Wildscreen was unable to raise sufficient funds from trusts, foundations, corporates and individual donors to support the year-round costs of keeping Arkive online. Therefore, the charity had been using its reserves to keep the project online and was unable to fund any dedicated staff to maintain Arkive, let alone future-proof it, for over half a decade. Despite appeals for support, just 85 of our 5.6 million users in 2018 made a donation.

Space Fence The Space Fence is a second-generation space surveillance system currently being built by the US Air Force in order to track artificial satellites and space debris in Earth orbit.[1] Contracts were issued for development and construction in 2014, and the Space Fence is expected to be operational in 2019.[1] The budget is US$1.594 billion (FY15).[2] The initial space fence facility will be located at Kwajalein Atoll in the Marshall Islands,[1] along with an option for another radar site in Western Australia.[3] History[edit] The initial plans to upgrade the legacy Air Force Space Surveillance System were made in 2009. Fossil fuels subsidised by $10m a minute, says IMF Fossil fuel companies are benefitting from global subsidies of $5.3tn (£3.4tn) a year, equivalent to $10m a minute every day, according to a startling new estimate by the International Monetary Fund. The IMF calls the revelation “shocking” and says the figure is an “extremely robust” estimate of the true cost of fossil fuels. The $5.3tn subsidy estimated for 2015 is greater than the total health spending of all the world’s governments. The vast sum is largely due to polluters not paying the costs imposed on governments by the burning of coal, oil and gas.

Democracy Works to Protect Endangered Species Score one for citizen scientists: A new study in Science has found that citizen involvement is key in protecting endangered species. As co-author Berry Brosi, a biologist and professor of environmental studies at Emory University, says in Science Daily, “citizens, on average, do a better job of picking species that are threatened than does the Fish and Wildlife Service” (FWS). The US Endangered Species Act (ESA) became law about 40 years ago and has always been controversial, especially for its provision that citizens can petition to list any species that is unprotected and also sue the FWS to challenge any species listed. As Science Daily notes, critics say that this provision has meant that the FWS “wastes time and resources processing the stream of citizen requests,” so that its energies are diverted from truly vulnerable species.

The 9 limits of our planet … and how we’ve raced past 4 of them Johan Rockström says humanity has already raced past four of the nine boundaries keeping our planet hospitable to modern life. Writer John Carey digs into the “planetary boundary” theory — and why Rockström says his isn’t, actually, a doomsday message.We’ve been lucky, we humans: For many millennia, we’ve been on a pretty stable — and resilient — planet. As our civilizations developed, we’ve transformed the landscape by cutting down forests and growing crops. We’ve created pollution, and driven plants and animals extinct.