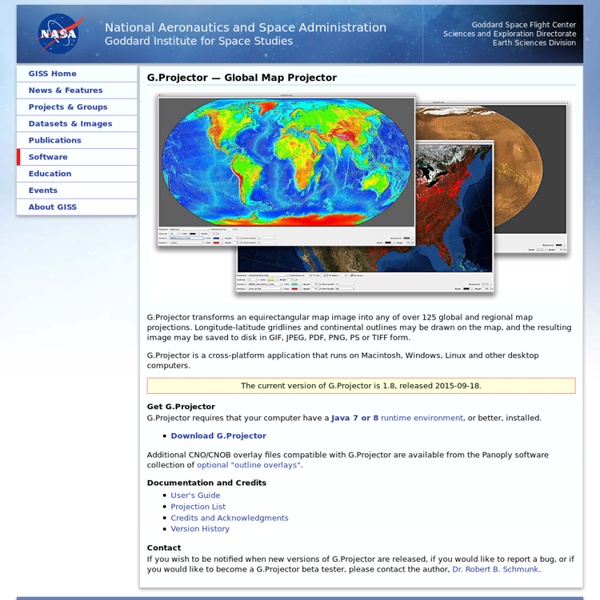 G.Projector transforms an equirectangular map image into any of over 125 global and regional map projections. Longitude-latitude gridlines and continental outlines may be drawn on the map, and the resulting image may be saved to disk in GIF, JPEG, PDF, PNG, PS or TIFF form. G.Projector is a cross-platform application that runs on Macintosh, Windows, Linux and other desktop computers. The current version of G.Projector is 1.8, released 2015-09-18. Get G.Projector G.Projector requires that your computer have a Java 7 or 8 runtime environment, or better, installed. Download G.Projector Additional CNO/CNOB overlay files compatible with G.Projector are available from the Panoply software collection of optional "outline overlays". Documentation and Credits Contact If you wish to be notified when new versions of G.Projector are released, if you would like to report a bug, or if you would like to become a G.Projector beta tester, please contact the author, Dr.

Whitebox GAT The Whitebox GAT project began in 2009 and was conceived as a replacement for the Terrain Analysis System (TAS). Whitebox GAT was intended to have a broader focus than its predecessor, positioning it as an open-source desktop GIS and remote sensing software package for general applications of geospatial analysis and data visualization. Whitebox GAT is intended to provide a platform for advanced geospatial data analysis with applications in both environmental research and the geomatics industry more broadly. It was envisioned from the outset as providing an ideal platform for experimenting with novel geospatial analysis methods. Equally important is the project’s goal of providing a tool that can be used for geomatics-based education.

World Wind JAVA SDK Welcome: Here you will find the World Wind SDK for Java. With this, developers can embed World Wind technology in their own applications. Many resources are available at goworldwind.org to help you understand and use World Wind. ArcReader ArcReader is a free, easy-to-use desktop mapping application that allows you to view, explore, and print maps and globes. Anyone with ArcReader can view high-quality interactive maps authored by ArcGIS for Desktop and published with the ArcGIS Publisher extension. With ArcReader, you can View, navigate, and print published ArcGIS maps using ArcReader (.pmf files). Deploy your GIS data to novices and professionals alike. Zoom, pan, and switch between map and page layout views.

QMapShack Use QMapShack to plan your next outdoor trip or to visualize and archive all the GPS recordings of your past exciting adventures. QMapShack is the next generation of the famous QLandkarte GT application. And of course it's even better and easier to use. Marble Portable virtual globe and atlas Marble is a Virtual Globe and World Atlas that you can use to learn more about Earth: You can pan and zoom around and you can look up places and roads. A mouse click on a place label will provide the respective Wikipedia article. Version 1.9.1 Rev 2 for Windows, English 41MB download / 62MB installed (Details)

Geophysics Age of the sea floor. Much of the dating information comes from magnetic anomalies. Geophysics /dʒiːoʊfɪzɪks/ is the physics of the Earth and its environment in space; also the study of the Earth using quantitative physical methods. GPXSee Description GPXSee is a Qt based tool for visualizing and analyzing GPX files. Key features User-definable map sources. CHAPTER 8: Cryptozoic (Precambrian) History CHAPTER 8: Cryptozoic (Precambrian) History (4.6 b.y. to 600 m.y.) Overview 1. The Cryptozoic Eon represents the first 80% of earth's history and a time before fossilized life became abundant.

OpenCPN A Chartplotter and GPS Navigation Software. OpenCPN is a free software (GPLv2) project to create a concise chart plotter and navigation software, for use underway or as a planning tool. OpenCPN is developed by a team of active sailors using real world conditions for program testing and refinement.

Osmium Tool A multipurpose command line tool based on the Osmium Library Features With the Osmium Tool you can: Get information about an OSM file Show the differences between OSM files Convert OSM files from one format into another (supports all XML and PBF formats) Merge and apply change files to an OSM file (with or without history) Create OSM change files from OSM data files Extract data from OSM history files for a given point in time or a time range Filter changesets by many different criteria Sort OSM files And much more... Code The code is available from GitHub: github.com/osmcode/osmium-tool.

Scientists gauge power of mighty asteroid that shaped Earth A monster asteroid, far more massive than the one that drove the dinosaurs to extinction, punched a huge hole in the Earth's crust billions of years ago and triggered global earthquakes that sent waves of towering tsunamis across all the world's oceans. Stanford scientists studying ancient rocks in a region of East Africa known as the Barberton Greenstone have for the first time modeled the asteroid's impact and concluded that it must have been one of the most powerful events to ever shape the face of Earth. The jumbled rocks there hold clear evidence of the stuff thrown up by the asteroid's impact roughly 3.26 billion years ago, but no one has found just where the crater-forming asteroid actually hit, said Stanford geologist Donald Lowe, who has explored the jumbled rocks of the Barberton area for more than a decade.

Osmium Library A fast and flexible C++ library for working with OpenStreetMap data Features The Osmium Library has extensive support for all types of OSM entities: nodes, ways, relations, and changesets. It allows reading from and writing to OSM files in XML and PBF formats, including change files and full history files. Osmium can store OSM data in memory and on disk in various formats and using various indexes.