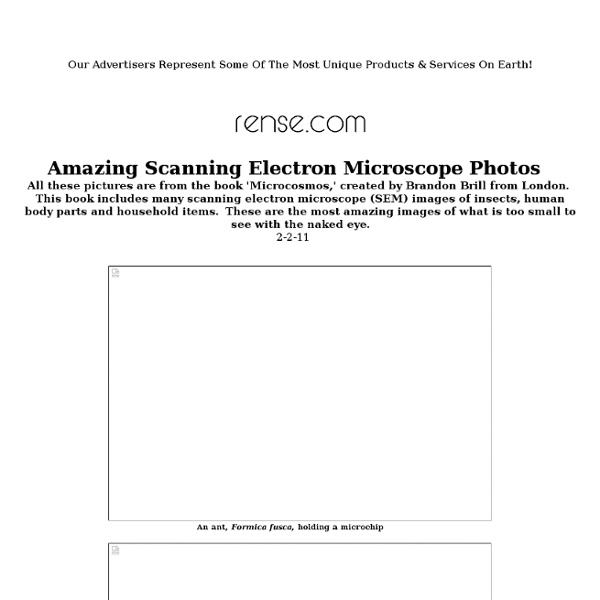 Amazing Scanning Electron Microscope Photos All these pictures are from the book 'Microcosmos,' created by Brandon Brill from London. This book includes many scanning electron microscope (SEM) images of insects, humanbody parts and household items. These are the most amazing images of what is too small tosee with the naked eye. 2-2-11 An ant, Formica fusca, holding a microchip Surface of an Erasable Programmable Read-Only Memory silicon microchip Eyelash hairs growing from the surface of human skin The surface of a strawberry Bacteria on the surface of a human tongue Human sperm (spermatozoa) Nylon hooks and loops of Velcro Household dust: includes long hairs of cat fur, twisted synthetic and woolen fibers, serrated insect scales, a pollen grain, and plant and insect remains The weave of nylon stocking fibers The head of a mosquito Head louse clinging to a human hair Eight eyes (two groups of four) on the head of a tarantula Cut human hairs and shaving foam between two razor blades Mushrooms spores

The Six Most Remote Places In Human Civilization Most Remote Places In Human Civilization: Alert, Canada The small village of Alert lies on the tip of the Nunavut territory in Canada a mere five hundred miles below the North Pole. With a year-round population of five people, Alert is one of the most treacherous and remote places in the world. Surrounded by the Arctic Ocean, the temperatures in the region can reach as low as 40 degrees below zero. Because of it’s proximity to the North Pole, Alert is also susceptible to 24-hour darkness during winter and 24-hour sunlight during summer. The Most Remote Places: Tristan da Cunha Located in the southern Atlantic Ocean, Tristan de Cunha is an archipelago of small islands considered the most remote place in the world. A total of 271 people are scattered across the islands’ working as farmers and craft makers, though they do have television stations and Internet access via satellite.

Chasing Vivid Dreams Most people are other people. Their thoughts are someone else's opinions, their lives a mimicry, their passions a quotation. ~Oscar Wilde July 26, 2010 ← Jul 25 • Jul 27 → I <3 Tumblr | stiqr | Disqus | bloglovin' Top Give Ps a chance - Stanford Medicine Magazine - Stanford University School... A Nobelist’s quest to open our eyes to the next DNA. It’s called Poly P By SPYROS ANDREOPOULOS For the past 15 years, Arthur Kornberg, MD, a Nobel Prize-winning biochemist at Stanford, has been deepening his relationship with one of biology’s wallflowers: a molecule he has nicknamed poly P. “It’s more important than I am,” he says, with a smile. It’s not just his love of a good biochemical mystery that keeps the emeritus professor working in the lab — though that’s certainly part of what drives him. Inorganic polyphosphate, the molecule Kornberg calls poly P, is older than the hills — literally. What exactly is poly P? Kornberg became fascinated by poly P in the 1950s. When Kornberg arrived at Stanford to lead the biochemistry department in the early ’60s, his work on DNA, for which he had received the Nobel Prize in 1959, had heated up. This underscored for him that the stationary phase of a microbial “bug” is anything but stationary. Promising. Comments? Back To Contents

From the Photo Desk Toronto Star Picture Editor Wanda Goodwin couldn't resist showcasing these two Arctic fox pups at The Aquarium of the Pacific. Yes, another Daily Beast Cute Alert! Photos: Robin Riggs The two brothers who are just six-weeks old and can be viewed at the Aquarium’s Molina Animal Care Center. This little pup has one blue and one brown eye. As of now, the little guys don’t have names yet. Statistical Data Mining Tutorials Advertisment: In 2006 I joined Google. We are growing a Google Pittsburgh office on CMU's campus. We are hiring creative computer scientists who love programming, and Machine Learning is one the focus areas of the office. We're also currently accepting resumes for Fall 2008 intenships. The following links point to a set of tutorials on many aspects of statistical data mining, including the foundations of probability, the foundations of statistical data analysis, and most of the classic machine learning and data mining algorithms. These include classification algorithms such as decision trees, neural nets, Bayesian classifiers, Support Vector Machines and cased-based (aka non-parametric) learning. I hope they're useful (and please let me know if they are, or if you have suggestions or error-corrections).

Six Amazing Oceanic Creatures The depths of the ocean are jam-packed with weird and wonderful creatures — great, small, hairy, ugly, colorful and alike. We were hard-pressed to pick just six, but here are some of lesser known and most amazing oceanic creatures of the seas: Amazing Oceanic Creatures: Axolotl The Axolotl is a species of salamander that fails to undergo full metamorphosis, retaining qualities from the larvae stage into their adult phase. The species is generally found in Mexico,and is named after an Aztec term that means ‘water doll’. Axolotl’s are characterized by five colors (mottled black/green, white, gold, black, albino), long tails, a fin from the back of the head to the tail, four lizard-like legs, feathery gills and the ability to regenerate limbs. Amazing Oceanic Creatures: Yeti Lobster The Kiwa Hirsuta, more commonly known as Yeti Lobster, was discovered in March 2005 in the South Pacific Ocean.

From the Photo Desk An Australian astronomer spent 18 months photographing the night sky with an ordinary digital camera, turning thousands of pictures into a stunning time-lapse video. This image shows star trails above Elephant Rock on the Mornington Peninsula in South Victoria. Alex Cherney took advantage of the lack of light pollution from a remote peninsula on the south coast of Australia to record the dazzling scenes, showing how the sky changes at night. The pictures show planets, shooting stars, the Milky Way, the Moon, satellites and planes as well as rolling clouds, changing tides and passing ships on the horizon. Cherney, an IT consultant, spent six separate nights over 18 months shooting the sky — each with a new or crescent moon to ensure minimum interference from light. His spectacular images were then edited into a two-and-a-half minute video. “It was my daughter who got me into astronomy,” the 36-year-old father-of-two from Melbourne told the Daily Mail.

Computer learns language by playing games Computers are great at treating words as data: Word-processing programs let you rearrange and format text however you like, and search engines can quickly find a word anywhere on the Web. But what would it mean for a computer to actually understand the meaning of a sentence written in ordinary English — or French, or Urdu, or Mandarin? One test might be whether the computer could analyze and follow a set of instructions for an unfamiliar task. And indeed, in the last few years, researchers at MIT’s Computer Science and Artificial Intelligence Lab have begun designing machine-learning systems that do exactly that, with surprisingly good results. Starting from scratch “Games are used as a test bed for artificial-intelligence techniques simply because of their complexity,” says Branavan, who was first author on both ACL papers. Moreover, Barzilay says, game manuals have “very open text. So initially, its behavior is almost totally random. Proof of concept

Namibia's Coastal Parks - Behind the Lens: Photograph or Painting? While on assignment in Namibia for National Geographic magazine, Frans Lanting captured this surreal landscape image in a location called Dead Vlei. Due to the nature of the lighting in the frame, the photograph appears almost like a painting. We asked Lanting to take a few moments away from his current assignment in Africa to answer readers' questions about the photograph. Due to limited internet connectivity in the field, he was only able to provide brief responses to questions, so we asked Elizabeth Krist—Lanting's photo editor for this story—to offer additional detail where appropriate.(If you are interested in acquiring this image as a fine art print, please e-mail gallery@lanting.com.) From Shay Mordo: Absolutely amazing composition! Lanting: Here's a short summary about the making of the photo. Photograph by Frans Lanting From Ana Paula: What is it that appears white in the orange background? Lanting: The sand dune is dotted with white grasses.