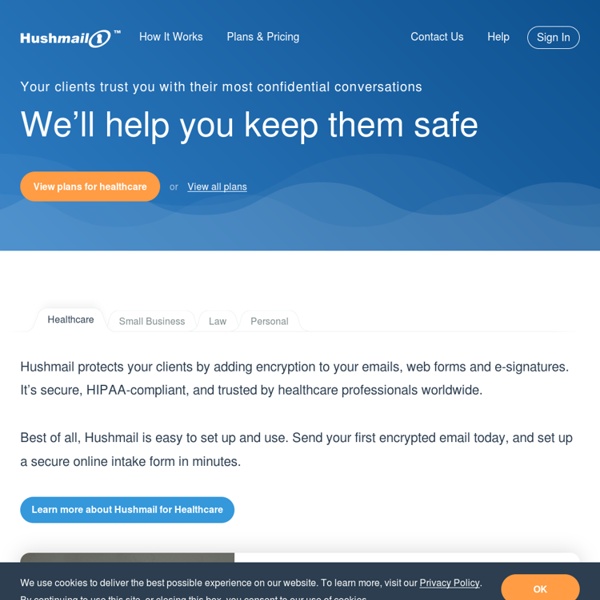 accountkiller Spring Financial is a finance company based in Canada. The company was founded in 2014. Spring Financial is a subsidiary of Canada Drives, which is a leading auto financing company in Canada. The Chief Executive Officer is Michael Galpin. The Director is Cody Green. » 55 Ways to Get More Energy Editor’s note: This is a guest post from Greg Go, co-author of Wise Bread‘s new book, 10,001 Ways to Live Large on a Small Budget. Buy the book today (by Monday 11:59pm PDT) and get a $15 Ebates bonus and a chance to win a brand new Flip Cam. If you’re tired all the time, a change in what you eat (diet) or what you do all day (activity pattern) may be all you need to turn things around 180°. You won’t be able to do everything on this list all the time — you’d tire yourself out trying to get more energy — but do try them all to see which ones work for you and your schedule. Add a few of these tips to your regular routine.

Open Whisper Systems Open Whisper Systems is a collaborative open source project that consists of "a large community of open source contributors, as well as a small team of dedicated developers".[1] Their mission is to "make private communication simple". The project was established in 2013 and is funded by a combination of donations and grants. §History[edit] §Background[edit] Security researcher Moxie Marlinspike and roboticist Stuart Anderson co-founded a startup company called Whisper Systems in 2010.[5][6] The company produced proprietary enterprise mobile security software. Among these were TextSecure and RedPhone.[7] They also developed a firewall and tools for encrypting other forms of data.[5]

Tiempos Verbales en Inglés - Future perfect in Past If you can't see the Babylon translation box, use this link for <a href=" or this one for <a href=" Descárgalo gratis aquí El tiempo Future Perfect in Past responde a la pregunta: What was going to have happened? Facebook privacy and kids: Don’t post photos of your kids online Photo by Hemera/Thinkstock I vividly remember the Facebook post. It was my friend’s 5-year-old daughter “Kate,” (a pseudonym) standing outside of her house in a bright yellow bikini, the street address clearly visible behind her on the front door. A caption read “Leaving for our annual Labor Day weekend at the beach,” and beneath it were more than 50 likes and comments from friends—including many “friends” that Kate’s mom barely knew. The picture had been uploaded to a Facebook album, and there were 114 shots just of Kate: freshly cleaned and swaddled on the day of her birth … giving her Labradoodle a kiss … playing on a swing set. But there were also photos of her in a bathtub and an awkward moment posing in her mother’s lacy pink bra.

The storm inside I know all about the "whats" of depression. I'm alert to the mundane side effects of medications and put up with them, mostly. Sometimes I can predict trajectories and undulations and happy breakthroughs. PRIVACY - How we protect you StartPage, and its sister search engine Ixquick, are the only third-party certified search engines in the world that do not record your IP address or track your searches. Every time you use a regular search engine, your search data is recorded. Major search engines capture your IP address and use tracking cookies to make a record of your search terms, the time of your visit, and the links you choose - then they store that information in a giant database. Those searches reveal a shocking amount of personal information about you, such as your interests, family circumstances, political leanings, medical conditions, and more. This information is modern-day gold for marketers, government officials, black-hat hackers and criminals - all of whom would love to get their hands on your private search data.

WebPlotDigitizer - Copyright 2010-2017 Ankit Rohatgi Loading application, please wait... Problems loading? Make sure you have a recent version of Google Chrome, Firefox, Safari or Microsoft Edge installed. Magnified View Settings Run Script How to foil NSA sabotage: use a dead man's switch The more we learn about the breadth and depth of the NSA and GCHQ's programmes of spying on the general public, the more alarming it all becomes. The most recent stories about the deliberate sabotage of security technology are the full stop at the end of a sentence that started on 8 August, when the founder of Lavabit (the privacy oriented email provider used by whistleblower Edward Snowden) abruptly shut down, with its founder, Ladar Levison, obliquely implying that he'd been ordered to secretly subvert his own system to compromise his users' privacy. It doesn't really matter if you trust the "good" spies of America and the UK not to abuse their powers (though even the NSA now admits to routine abuse), you should still be wary of deliberately weakened security. It is laughable to suppose that the back doors that the NSA has secretly inserted into common technologies will only be exploited by the NSA. One important check against the NSA's war on security is transparency.

Open Port Check Tool - Test Port Forwarding on Your Router Remote Address Port Number Check a port's status by entering an address and port number above. The open port checker is a tool you can use to check your external IP address and detect open ports on your connection. This tool is useful for finding out if your port forwarding is setup correctly or if your server applications are being blocked by a firewall.

Upside-Down-Ternet My neighbours are stealing my wireless internet access. I could encrypt it or alternately I could have fun. I'm starting here by splitting the network into two parts, the trusted half and the untrusted half. The trusted half has one netblock, the untrusted a different netblock. We use the DHCP server to identify mac addresses to give out the relevant addresses. GNU Privacy Guard GNU Privacy Guard (GnuPG or GPG) is a GPL Licensed alternative to the PGP suite of cryptographic software. GnuPG is compliant with RFC 4880, which is the current IETF standards track specification of OpenPGP. Current versions of PGP (and Veridis' Filecrypt) are interoperable with GnuPG and other OpenPGP-compliant systems. GnuPG is a part of the Free Software Foundation's GNU software project, and has received major funding from the German government.[7] §History[edit] GnuPG is a system compliant to the OpenPGP standard, thus the history of OpenPGP is of importance; it was designed to interoperate with PGP, the email encryption program initially designed and developed by Phil Zimmermann.[10][11]