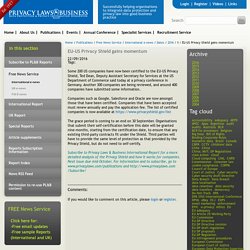 Another 300 companies are being reviewed, and around 400 companies have submitted some information. Companies such as Google, Salesforce and Oracle are now amongst those that have been certified. Companies that have been accepted must renew annually and pay the application fee. The list of certified companies is now available at The grace period is coming to an end on 30 September. Subscribe to Privacy Laws & Business International Report for a more detailed analysis of the Privacy Shield and how it works for companies.

Privacy Shield deal lets US tech firms transfer European customers' data again. Governments across the European Union have finally given the green light to a new deal on how consumer data must be transferred with the United States, ending months of delay caused by concern over US surveillance. 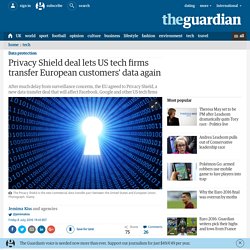 Privacy Shield, the new commercial data transfer pact, was provisionally agreed by the EU and the US in February and will come into effect on Tuesday. The EU’s top court had struck down the previous data transfer agreement, Safe Harbour, on concerns about intrusive US surveillance – leaving companies, including Google, Facebook and MasterCard, in legal limbo. Representatives of European Union member states mostly voted in favour of the EU-US Privacy Shield, but there were abstentions from Austria, Slovenia, Bulgaria and Croatia, sources said. Austria and Slovenia have voiced concerns that the pact does not go far enough to secure their citizens’ privacy. 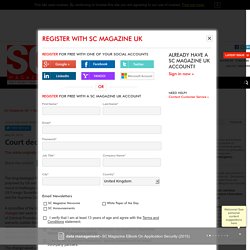 A committee of the US Supreme Court made changes last week to Rule 41 of the Federal Rules of Criminal Procedure, allowing judges to issue warrants outside their districts. The change would grant expansive powers to law enforcement agencies to hack and access information on computers if device location information “has been concealed through technological means". The change would also remove limitations on law enforcement agencies in investigations of Computer Fraud and Abuse Act (CFAA) violations if “the media are protected computers that have been damaged without authorisation and are located in five or more districts”. “Make no mistake: the Rule 41 proposal implicates people well beyond US borders. #PrivacyShield - Le "oui, mais" des autorités européennes des données personnelles. Data Protection Authorities’ Opinion Paves Way For Adoption Of EU-US Privacy Shield. Press_release_shield_en. European Commission - Streaming Service. 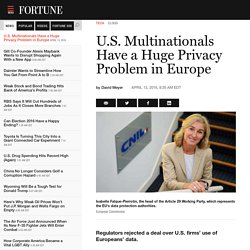 U.S. multinationals therefore remain in legal limbo when it comes to importing the personal data of Europeans, such as emails, files, and even names and birth dates. That applies to corporations wanting to process the information of employees in Europe, as well as web firms providing cloud services to European customers. There used to be a simple way for companies to import this data without the threat of legal action—an agreement called Safe Harbor, which let firms self-certify that they abide by EU-strength privacy rules. However, that deal got nixed by Europe’s top court because firms couldn’t guarantee the data wouldn’t be sucked up by U.S. intelligence agencies, and because Europeans didn’t have adequate ways in which to complain about their data being misused. PS_Feedback. TACD.org. Today, the European Data Protection Authorities (DPAs) sent the so-called EU-US Privacy Shield back to the drawing board. 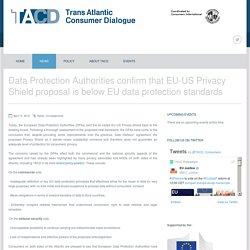 Following a thorough assessment of the proposed new framework, the DPAs have come to the conclusion that, despite providing some improvements over the previous ‘Safe Harbour’ agreement, the proposed Privacy Shield as it stands raises substantial concerns and therefore does not guarantee an adequate level of protection for consumers’ privacy. The concerns raised by the DPAs affect both the commercial and the national security aspects of the agreement and had already been highlighted by many privacy advocates and NGOs on both sides of the Atlantic, including TACD in its most recent policy position. Datenschutzreform: Ein großer Schritt für Grundrechte und Verbraucherschutz » GrünDigital. Das Europäische Parlament hat heute die Datenschutzreform angenommen. 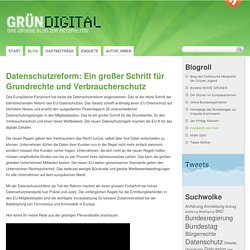 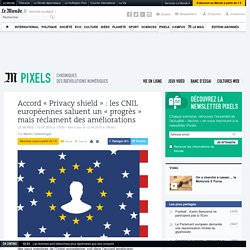 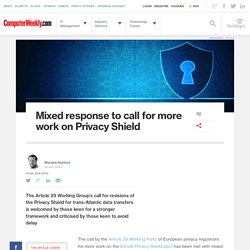 Instead of approving the proposed pact to replace the now-defunct Safe Harbour agreement to ensure privacy protections for trans-Atlantic data transfers, the group called on the US and European Commission (EC) to revise and clarify several points. The A29WP said it was still concerned about the possible “massive and indiscriminate” bulk collection of EU citizens’ data by US authorities, and called for further guarantees about the powers US officials would have to handle complaints from EU citizens.

“We don’t have enough security or guarantees in the status of the ombudsperson and in their effective powers to be sure this is really an independent authority,” said Isabelle Falque-Pierrotin, chair of the A29WG. Uncertainty for businesses. European enforcers not sold on ‘privacy shield’ In a stuffy room in a European Commission building near Brussels’ Place Jourdan, the EU’s data cops will meet this week to decide the fate of an agreement to enable companies to move data across the Atlantic. 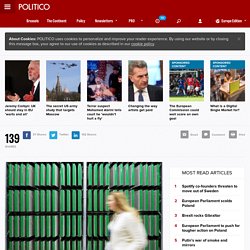 If the authorities decide the “privacy shield” pact doesn’t offer Europeans adequate protection, billions of euros of lost business will be at stake because data transfers could grind to a halt. Although the outcome is not binding, it would be difficult for the Commission to ignore. The privacy shield was created by the Commission and U.S. negotiators in February after its 15-year-old predecessor known as “safe harbor” was struck down by the European Court of Justice in October because it did not sufficiently protect Europeans’ data. Before the ECJ ruling, more than 4,000 U.S. companies relied on safe harbor for legal cover. Companies self-certified that they offered Europeans the same level of data protection in the U.S. as they got at home. DATA TRANSFERS, SAFE HARBOUR AND THE EU/US PRIVACY SHIELD — Risk & Compliance. Last October’s ground breaking decision from the Court of Justice of the European Union (ECJ) on the US Safe Harbour has sent ripples through the transatlantic business community. 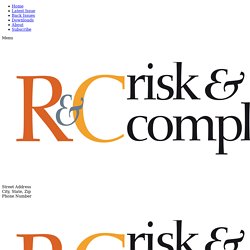 The judgement not only affects US businesses with subsidiaries in Europe, but IT-related service providers (particularly online services) with European customers. These businesses can no longer rely on the US Safe Harbour to transfer personal information relating to their employees, customers and suppliers from Europe to the US. This article explains the implications of the decision, how these affect organisations and how businesses can address the change. Question: When is a Shield not a Shield? Answer: When it still looks a 'wee' bit like Safe Harbor! Privacy Shield - Le "oui, mais" des autorités européennes des données personnelles - ZDNet. Après l'invalidation du Safe Harbor par la Cour de Justice de l'UE, Commission européenne et autorités américaines ont dû intensifier les négociations pour définir un dispositif de remplacement pour encadrer les transferts de données personnelles hors de l'Europe.

As anticipated the Article 29 Working Party (often known as WP29), a group of the EU’s data protection regulators met in Brussels today to discuss the European Commission’s Privacy Shield scheme, the proposed replacement for Safe Harbor. As we had anticipated in our earlier alerts WP29 decided that in their view Privacy Shield does not offer adequate protection. Whilst the decision is not binding on the Commission it will be hard to ignore if Privacy Shield is to be successful, especially since enforcement is still in the hands of the data regulators who sat around the table at WP29 and not in the hands of the Commission.

WP29’s position is not a surprise, especially given the rumours coming out of Germany. As we mentioned previously some German data protection authorities have had a long-held objection to Safe Harbor and they have been the most aggressive in enforcement since Safe Harbor died (for more on this see our alert here). Amongst WP29’s criticisms are: Office: +44 (0)207 075 1784. Global Data Protection News: WP29 Privacy Shield Update. Privacy Shield Revealed, What Changes? Privacy Shield Revealed, What Changes? Giulio Coraggio on 10 March, 2016 - 10:10 am in data protection, privacy The publication of the details of the Privacy Shield that will replace the Safe Habor for the transfer of personal data to the United States sets a higher bar of compliance.

TRANSATLANTIC COALITION OF CIVIL SOCIETY GROUPS: PRIVACY SHIELD IS NOT ENOUGH, MUST RETURN TO NEGOTIATING TABLES. The Privacy Shield, announced at the beginning of February and published a month later, is an arrangement between the European Union and the United States intended to allow companies to transfer data on E.U. citizens to the U.S. Under European law, companies are only allowed to transfer data to a country that guarantees adequate levels of data protection. The Privacy Shield is intended to provide rules for that protection.

The Privacy Shield replaces the "Safe Harbor" arrangement, which was invalidated by the Court of Justice of the European Union ("CJEU") late last year. The Safe Harbor had been broadly criticized for its system of self-certification, lack of transparency and oversight, and insufficient privacy protections. European Commission announces some detail on Privacy Shield scheme to replace Safe Harbor. Almost a month after announcing that a deal was done between the EU and the US in order to protect European personal data, the European Commission have finally announced the details of the replacement for Safe Harbor: Privacy Shield. We’re still working our way through all of the documentation, but thought we’d share our initial thoughts. Compliant? The FAQs issued by the Commission state that “the EU-U.S.

Privacy Shield reflects the requirements set out by the European Court of Justice in its ruling on 6 October 2015, which declared the old Safe Harbour framework invalid”. This is a fundamental issue. And there are definitely some who believe it doesn’t measure up. PS_Feedback. Apple's FBI Clash Risks Piercing Trust in EU Privacy Shield. Apple Inc.’s fight with the U.S. government over whether it can be forced to help unlock an iPhone has spilled across borders, threatening to delay a trans-Atlantic pact protecting European data from American eyes.

QuickTake Apple National regulators from across the European Union promised to give their verdict next month on the so-called privacy shield deal, which toughens EU protections where the U.S. is involved. The Apple case is raising concerns that the new plan doesn’t go far enough, regional politicians, officials and lawyers said. That in turn could mean more deliberation and push back the completion date. Data-protection regulators will probably “be thinking about the FBI’s demands on Apple when reviewing the viability of the shield and its level of safeguards,” said Wim Nauwelaerts, a privacy lawyer at Hunton & Williams LLP in Brussels. Commercial Reasons ‘Just Terrible’ ‘Clear Limitations’ European Commission Wrongly Denies EPIC's Request For "Privacy Shield" EU EU Law FOIA foia Safe Harbor European Commission Wrongly Denies EPIC's Request For "Privacy Shield" The European Commission has wrongly denied EPIC's Freedom of Information request for the text of the "Privacy Shield.

" The Commission said the adequacy decision about Safe Harbor is "in preparation" and "negotiations with the U.S. are still ongoing. " The Privacy Shield – is it any good then? The Privacy Shield – is it any good then? « Privacy and information law blog. Federal judge: Apple doesn't have to unlock iPhone in N.Y. case. A federal magistrate in Brooklyn, New York, has denied the government’s application to force Apple to help law enforcement gain access to an iPhone belonging to a man who pled guilty in a meth conspiracy.

The ruling is likely to bolster Apple’s resistance in California to a separate FBI request that the company help investigators circumvent security features on an iPhone used by one of the terrorists in the San Bernardino shootings. Eu us privacy shield full text. The New EU-US Data Sharing Pact Still Allows Mass Surveillance. Max Schrems, left, and his lawyer Herwig Hofmann, right, walk in the hallway at the European Court of Justice in Luxembourg on Tuesday, Oct. 6, 2015. Image: Geert Vanden Wijngaert/AP. Privacy Shield details released. After two years of negotiations, and several major obstacles, including the invalidation of the Safe Harbor by a European court, the U.S. Department of Commerce released details today of the EU-U.S. The new EU - US Privacy Shield - Data protection and privacy global insights. By Lucy Tucker. Here's What U.S. Firms Will Have To Do Under EU Privacy Shield Deal.