Vtunnel.com is here to help you beat internet filtering! 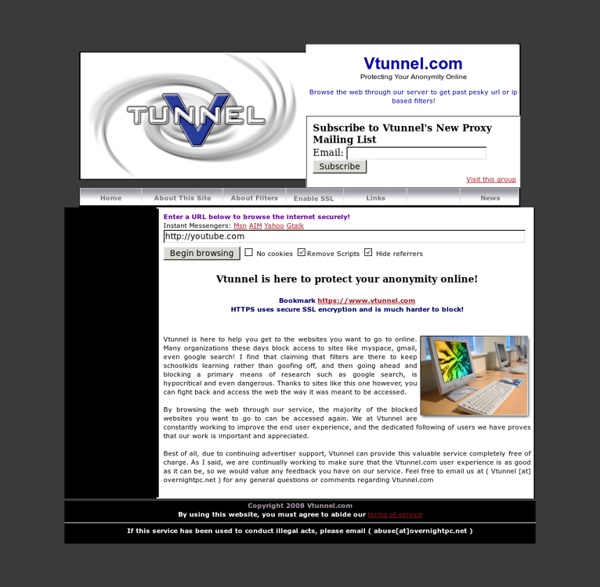 Online anonymous web Proxy StrongVPN.com - Strong security for your internet connection and BrowserSpy Ninja Cloak | Fast, free, anonymous web browsing with NinjaCloak.com the radical transparency of DAVID BRIN The Transparent Society: Will Technology Force Us to Choose Between Privacy and Freedom? was published in May 1998 by Perseus Press (formerly Addison Wesley). This large nonfiction work concerns threats to privacy and openness in the information age. It won the Obeler Freedom of Speech Award from the American Library Association and was a finalist for the McGannon Public Policy Prize, and is still in print. Our society has one great knack above all others -- one that no other ever managed -- that of holding the mighty accountable. the infamous page 206 Yes, that is where -- in a creepy "Twilight zone" moment -- I seemed to predict the events of 9/11 in detail and then the following Patriot Act: "What might have happened if those bombers actually succeeded in toppling both towers of New York's World Trade Center, killing tens of thousands. I DEFEND a TRANSPARENT SOCIETY PRIVACY after 9/11/2001 "Despite the yammerings on TV, a lack of security measures did not cause this tragedy.

q22w - Free WeB Proxy DIVINA: Discovering Vulnerabilities of Internet Accounts#2 In 2012, Mat Honan found that his Twitter account had been hacked. When trying to figure out what happened, he found that not just his Twitter account was hacked, but also his Amazon account, his Gmail account, and his Apple account — meaning that all data in these accounts was lost. His iPhone was locked, and his Mac was wiped clean. All data was erased. As it turned out, Hackers were able to access his Amazon account. So you should always switch on two-factor authentication for your online accounts, if available. The problem is, though, that if you lose your password and do not have your smartphone, you lose access to your account! To make matters worse, security measures are often intertwined. DIVINA is a system that determines how vulnerable your internet accounts are. DIVINA is being developed at Télécom ParisTech University by Ziad Ismail, Danai Symeonidou, and Fabian M. For more details, see our publication

Proxy Browsing - Anonymous Web Browser DIVINA: Discovering Vulnerabilities of Internet Accounts#1 In all of the following, we will identify your online accounts by simple names such as “gmail”, “facebook”, or “hotmail”. You can use arbitrary names, as long as you use them consistently across questions. In the same way, we will identify your devices by names such as “macbook”, “workpc”, or “secondPhone”. Again, you can use arbitrary names as long as you’re consistent across questions. Your standard phone has to be called “phone”. You do not have to enter any passwords. Gmail Do you have a Gmail account? gmail-access => gmail-data gmail-access => gmail-destruction gmail-password => gmail-passwordAccess Do you have a recovery address for your account? If yes, type the account name here (e.g. X-access => gmail-passwordAccess Do you have a recovery phone for your account? The recovery phone is where your password can be sent. X-sms => gmail-passwordAccess Do you forward emails from different accounts to your Gmail account? gmail-access => X-data Do you have two-factor authentication enabled? Yes No

www.proxyweb.net - Home Page GoogleSharing Free Proxy Servers - Protect Your Online Privacy with Our Proxy List TrackMeNot Background Public awareness of the vulnerability of searches to systematic surveillance and logging by search engine companies, was initially raised in the wake of a case, initiated August 2005, in which the United States Department of Justice (DOJ) issued a subpoena to Google for one week's worth of search query records (absent identifying information) and a random list of one million URLs from its Web index. This was cited as part of its defense of the constitutionality of the Child Online Protection Act (COPA). When Google refused, the DOJ filed a motion in a Federal District Court to force compliance. Google argued that the request imposed a burden, would compromise trade secrets, undermine customers' trust in Google, and have a chilling effect on search activities. While viewed from the perspective of user privacy this seems a good outcome, yet it does bring to light several disquieting points.