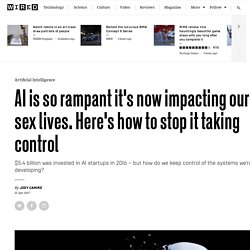 It's in the news we consume and the general cultural conversation, but there are also more tangible markers we can point to. Machine learning versus AI: what's the difference? Machine learning versus AI: what's the difference? In just two years Amazon’s Echo, and as a result Alexa, is in more than six per cent of American homes. While the fact that, in general, people no longer associate AI with Skynet bodes well for the technology’s role in our day-to-day lives, that fear of AI insurrection has been replaced with new worries. AI programs exhibit racial and gender biases, research reveals. An artificial intelligence tool that has revolutionised the ability of computers to interpret everyday language has been shown to exhibit striking gender and racial biases. 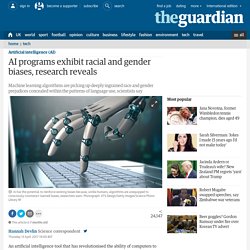 The findings raise the spectre of existing social inequalities and prejudices being reinforced in new and unpredictable ways as an increasing number of decisions affecting our everyday lives are ceded to automatons. In the past few years, the ability of programs such as Google Translate to interpret language has improved dramatically. These gains have been thanks to new machine learning techniques and the availability of vast amounts of online text data, on which the algorithms can be trained. However, as machines are getting closer to acquiring human-like language abilities, they are also absorbing the deeply ingrained biases concealed within the patterns of language use, the latest research reveals. This AI Knows Exactly How Racist and Sexist You Can Be. For many innovators, technology serves as a way to bridge gaps between various disparities.

This continues over into the realm of artificial intelligence. Algorithms that hire would theoretically eliminate biases and give women and men of all races an equal chance at work. Facebook AI Academy – Facebook Research. Artificial Intelligence has the potential to enhance and enable new experiences across Facebook. 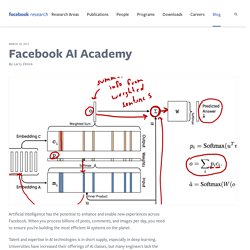 When you process billions of posts, comments, and images per day, you need to ensure you’re building the most efficient AI systems on the planet. Talent and expertise in AI technologies is in short supply, especially in deep learning. Universities have increased their offerings of AI classes, but many engineers lack the background and hands-on experience to build AI systems that run in the wild. To solve this gap we created the Facebook AI Academy, as recently written about in this Wired article. We believe that innovation relies on education. The AI Academy accomplishes this in two ways. Ed Sheeran apologises after bot banishes busker fan from Facebook. Even good bots fight: The case of Wikipedia. Abstract In recent years, there has been a huge increase in the number of bots online, varying from Web crawlers for search engines, to chatbots for online customer service, spambots on social media, and content-editing bots in online collaboration communities. 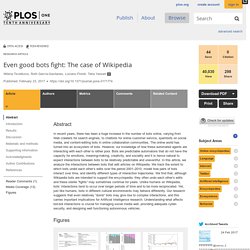 The online world has turned into an ecosystem of bots. However, our knowledge of how these automated agents are interacting with each other is rather poor. Bots are predictable automatons that do not have the capacity for emotions, meaning-making, creativity, and sociality and it is hence natural to expect interactions between bots to be relatively predictable and uneventful. In this article, we analyze the interactions between bots that edit articles on Wikipedia. Robot deaths are nothing new but AI will change everything. Tommasourbinati/iStock On January 25, 1979, 25-year-old Robert Williams climbed into a storage rack to retrieve parts from a malfunctioning robot at Ford’s Flat Rock plant in Michigan. 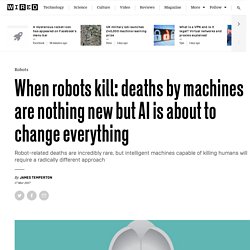 The robot, not able to sense Williams' presence, swung round and struck him on the head, killing him instantly. The robot kept working for 30 minutes as Williams lay dead on the floor. His death, nearly forty years ago, makes Williams the first person to be killed as a result of actions by a robot. In August 1983, his family was awarded $10 million after a jury ruled against Unit Handling, the company that designed the one-ton machine. AI Medicine Comes to Africa’s Rural Clinics. Come One, Come All: As part of a cervical cancer prevention campaign in six African countries, the nonprofit Pink Ribbon Red Ribbon works with local health clinics on special screening and education events, such as this one in Botswana. 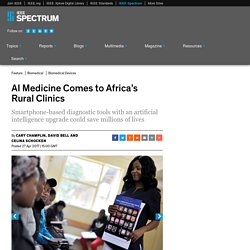 In rural health clinics across Kenya, women have started showing up with a surprising request: They’ve come for their “cervical selfies.” Their enthusiasm is a good omen for a public health campaign against cervical cancer now under way in six African countries. Let’s break it down further. Artificial Intelligence (AI) Means the End of Privacy as we know it.