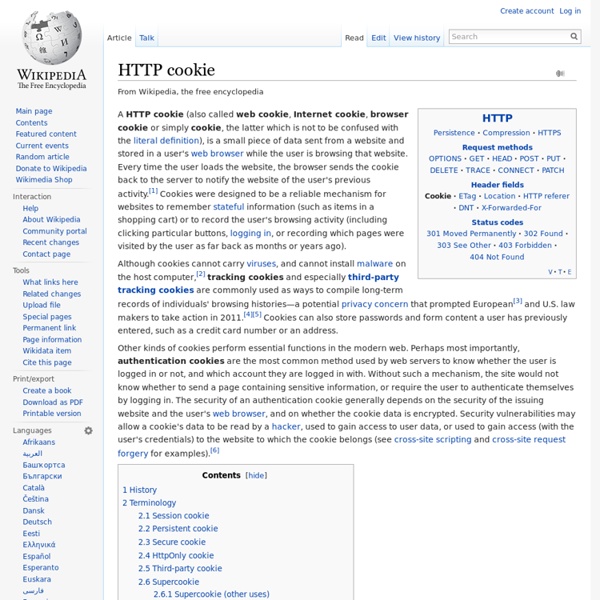 A HTTP cookie (also called web cookie, Internet cookie, browser cookie or simply cookie, the latter which is not to be confused with the literal definition), is a small piece of data sent from a website and stored in a user's web browser while the user is browsing that website. Every time the user loads the website, the browser sends the cookie back to the server to notify the website of the user's previous activity.[1] Cookies were designed to be a reliable mechanism for websites to remember stateful information (such as items in a shopping cart) or to record the user's browsing activity (including clicking particular buttons, logging in, or recording which pages were visited by the user as far back as months or years ago). §History[edit] The term "cookie" was derived from the term "magic cookie", which is a packet of data a program receives and sends back unchanged. Together with John Giannandrea, Montulli wrote the initial Netscape cookie specification the same year. §Structure[edit]

Privacy Lawsuit Targets Net Giants Over ‘Zombie’ Cookies | Threat Level A wide swath of the net’s top websites, including MTV, ESPN, MySpace, Hulu, ABC, NBC and Scribd, were sued in federal court Friday on the grounds they violated federal computer intrusion law by secretly using storage in Adobe’s Flash player to re-create cookies deleted by users. At issue is technology from Quantcast, also targeted in the lawsuit. Quantcast created Flash cookies that track users across the web, and used them to re-create traditional browser cookies that users deleted from their computers. These “zombie” cookies came to light last year, after researchers at UC Berkeley documented deleted browser cookies returning to life. Quantcast quickly fixed the issue, calling it an unintended consequence of trying to measure web traffic accurately. Flash cookies are used by many of the net’s top websites for a variety of purposes, from setting default volume levels on video players to assigning a unique ID to users that tracks them no matter what browser they use. Photo:JGarber/Flickr

Privacy lawsuit targets 'Net giants over "zombie" cookies A wide swath of the 'Net's top websites, including MTV, ESPN, MySpace, Hulu, ABC, NBC and Scribd, were sued in federal court Friday on the grounds they violated federal computer intrusion law by secretly using storage in Adobe's Flash player to recreate cookies deleted by users. At issue is technology from Quantcast, also targeted in the lawsuit. Quantcast created Flash cookies that track users across the Web, and used them to recreate traditional browser cookies that users deleted from their computers. These “zombie” cookies came to light last year, after researchers at UC Berkeley documented deleted browser cookies returning to life. Flash cookies are used by many of the 'Net's top websites for a variety of purposes, from setting default volume levels on video players to assigning a unique ID to users that tracks them no matter what browser they use. Websites can store up to 100KB of information in the plug-in, 25 times what a browser cookie can hold.

TalkTalk UK ISP TalkTalk Monitoring its Customers Online Activity Without Consent − ISPreview UK Broadband ISP TalkTalk UK could be about to incur the wrath of privacy campaigners after some of its customers spotted that their online website browsing activity was being monitored and recorded without consent. The situation has caused a significant amount of concern with many end-users worried about the impact upon their personal privacy. TalkTalk has since confirmed that the monitoring, which was first discovered on the ISPs discussion forum during the middle of July (here), is part of a future Malware/Security/Parental Guidance tool to be provided by Chinese vendor Huawei. This is due to launch before the end of 2010. The system, which is not yet fully in place, aims to help block dangerous websites (e.g. those designed to spread malware) by comparing the URL that a person visits against a list of good and bad/dangerous sites. TalkTalk's Official Statement In due course we will be trialing and launching these services. A TalkTalk spokesperson told The Register :

Deep packet inspection There are multiple ways to acquire packets for deep packet inspection. Using port mirroring (sometimes called Span Port) is a very common way, as well as an optical splitter. Deep Packet Inspection (and filtering) enables advanced network management, user service, and security functions as well as internet data mining, eavesdropping, and internet censorship. Although DPI technology has been used for Internet management for many years, some advocates of net neutrality fear that the technology may be used anticompetitively or to reduce the openness of the Internet.[2] DPI is used in a wide range of applications, at the so-called "enterprise" level (corporations and larger institutions), in telecommunications service providers, and in governments.[3] Background[edit] DPI-enabled devices have the ability to look at Layer 2 and beyond Layer 3 of the OSI model. DPI at the enterprise level[edit] Vulnerabilities exist at network layers, however, that are not visible to a stateful firewall.

Technology and Liberty We are dedicated to protecting and expanding the First Amendment freedoms of expression, association, and inquiry; expanding the right to privacy and increasing the control that individuals have over their personal information; and ensuring that civil liberties are enhanced rather than compromised by new advances in science and technology. Make a Difference Your support helps the ACLU defend privacy rights and a broad range of civil liberties. Give Now The project is currently working on a variety of issues, including political protest, freedom of expression online, privacy of electronic information, journalists’ rights, scientific freedom, and openness in the courts. Additional Resources: dotRights (feature):Outdated privacy laws are allowing the government to engage in a shopping spree in the treasure trove of personal information collected by companies. TAKE ACTION: Modernize Our Privacy Law! Does the Government Want to Read Your Texts and Emails? Most Popular

Thinglink Blog METHOD AND APPARATUS FOR THWARTING TRAFFIC ANALYSIS IN ONLINE GAMES - US Patent Application 20100197405 Full Text Abstract text The subject disclosure relates to a method and apparatus for routing data in a network-based computer game via proxy computers. The method and system includes a set of techniques that utilizes the proxy computers to thwart traffic analysis in high-speed games while continuing to satisfy the games' latency requirements. The method and apparatus facilitates thwarting multiple classes of traffic analysis, including inspection of unencrypted header fields, observation of packet size, correlation of packet timing, and collusion among players. A matchmaking system for matching players in a network-based computer game in a manner that resists traffic analysis is also provided. Claims 1. 2. 3. 4. 5. 6. 7. 8. 9. 10. 11. 12. 13. 14. 15. 16. 17. 18. 19. 20. Description [0001]The subject disclosure is generally directed towards routing data in a computer network, and more particularly towards routing gaming data so as to thwart traffic analysis during online gaming sessions. Overview

Stanford Technology Law Review The Stanford Technology Law Review (STLR) presents well-rounded analyses of the legal, business, and policy issues that arise at the intersection of intellectual property law, science and technology, and industry. STLR publishes exclusively online, providing timely coverage of emerging issues to its readership base of legal academics and practitioners. Format STLR accepts manuscripts and perspectives from scholars, practitioners, and students. The exclusively online nature of the journal provides for a rapid turnaround time from submission to publication, and frees contributors from the traditional restrictions of page limits and quotas. The publication is edited and reviewed by Stanford Law students, many of whom have advanced degrees in the relevant technical, scientific, and social science fields. History From its foundation, STLR has recognized that its success will depend not only on author contributors. Membership STLR is a Stanford Law School organization managed by law students.