Open source is just a weapon. Barclays recently revealed its intention to cut 90% of its software development budget through cloud and open source. 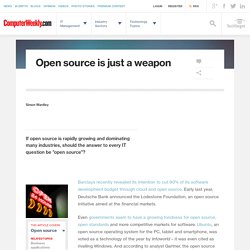 Early last year, Deutsche Bank announced the Lodestone Foundation, an open source initiative aimed at the financial markets. Even governments seem to have a growing fondness for open source, open standards and more competitive markets for software. Ubuntu, an open source operating system for the PC, tablet and smartphone, was voted as a technology of the year by Infoworld – it was even cited as rivalling Windows. And according to analyst Gartner, the open source Android has become the dominant smartphone operating system. From any reasonable perspective, the world of open source is booming – the golden years would appear to be approaching or even upon us. When Linus Torvalds launched the Linux project back in 1991, few people could have imagined that free software developed by open communities would ever match, let alone surpass, the efforts of industry software giants.

Open government experts raise concerns about “mosaic effect” in open data policy. “…one of the things we’re doing to fuel … more private sector innovation and discovery,” said President Barack Obama is to make the vast amounts of America’s data open and easy to access for the first time in history.” 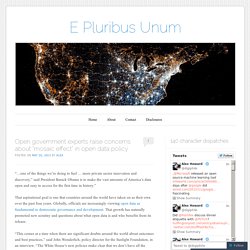 That aspirational goal is one that countries around the world have taken on as their own over the past four years. Globally, officials are increasingly viewing open data as fundamental to democratic governance and development. That growth has naturally promoted new scrutiny and questions about what open data is and who benefits from its release. “This comes at a time when there are significant doubts around the world about outcomes and best practices,” said John Wonderlich, policy director for the Sunlight Foundation, in an interview.

“The White House’s new policies make clear that we don’t have all the answers, but there are ways forward, towards new data and better processes.” That official consideration left journalists and open government advocates worried. Why Antivirus Companies Like Mine Failed to Catch Flame and Stuxnet. A couple of days ago, I received an e-mail from Iran. 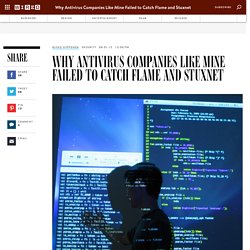 It was sent by an analyst from the Iranian Computer Emergency Response Team, and it was informing me about a piece of malware their team had found infecting a variety of Iranian computers. How Machines Learned To Recognize Our Faces So Well. Earlier this year Facebook created DeepFace, a facial recognition system almost as accurate as the human brain. 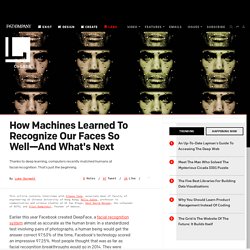 In a standardized test involving pairs of photographs, a human being would get the answer correct 97.53% of the time; Facebook's technology scored an impressive 97.25%. Most people thought that was as far as facial recognition breakthroughs would go in 2014. They were wrong. A few months after Facebook's breakthrough, the Multimedia Laboratory at the Chinese University of Hong Kong claims to have smashed Facebook’s record by building a recognition system that achieves a massive 99.15% accuracy rate—based on some truly innovative deep learning models.

"This is strong evidence that deep learning is making artificial intelligence possible," says the university’s Xiaoou Tang, former head of Microsoft Asia’s Visual Computing group of Microsoft Asia. Smaller Datasets, Better Models "Facebook relied heavily on their vast amount of data," Tang says. VIDEO: See How Easy It Is For Anyone With an iPhone To Steal Your Important Financial Information. Did you know that Apple makes a device that actually makes it easy for identity thieves to steal your ATM pin code? 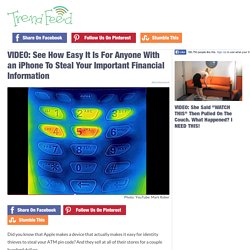 And they sell at all of their stores for a couple hundred dollars. This device looks like an ordinary iPhone case, but is actually an infrared camera. When a thief hovers their iPhone case over the pin pad, they can actually see the numbers that were last entered and use this to steal your financial information and even your identity.

Stop using Microsoft's IE browser until bug is fixed, US and UK warn. It's not often that the US or UK governments weigh in on the browser wars, but a new Internet Explorer vulnerability -- one that affects all major versions of the browser from the past decade -- has forced them to raise an alarm: Stop using IE. 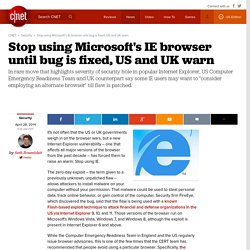 The zero-day exploit -- the term given to a previously unknown, unpatched flaw -- allows attackers to install malware on your computer without your permission. That malware could be used to steal personal data, track online behavior, or gain control of the computer. Security firm FireEye, which discovered the bug, said that the flaw is being used with a known Flash-based exploit technique to attack financial and defense organizations in the US via Internet Explorer 9, 10, and 11. Those versions of the browser run on Microsoft's Windows Vista, Windows 7, and Windows 8, although the exploit is present in Internet Explorer 6 and above.

FireEye recommends that if you can't switch browsers, then disable Internet Explorer's Flash plug-in. The secret to online safety: Lies, random characters, and a password manager. It's time to ask yourself an uncomfortable question: how many of your passwords are so absurdly weak that they might as well provide no security at all? 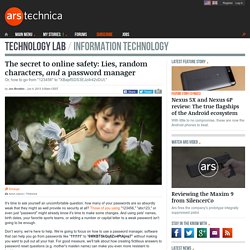