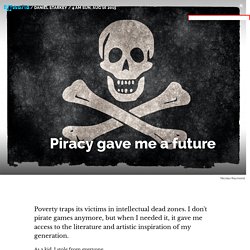 I don't pirate games anymore, but when I needed it, it gave me access to the literature and artistic inspiration of my generation. As a kid, I stole from everyone. An unattended purse in a restaurant? Easy $5. Pokémon cards at Target? "I need this," I'd tell myself. For a time, that thin justification worked. After each snag, I'd put on airs and feign ignorance long enough for suspicion to drop. It was more than just jealousy, of course. Things started to change for me in middle school. That year was also the same that my mom got her first computer. The Internet said I didn't have to be hungry; it was a tool that opened up the world. In a way, downloading games didn't feel that different from searching the web for information. A couple years later, my mom had an accident and ended up taking more than a year off from work.

Before too long I had $300 as well as a spare monitor and case, enough to build a basic system. Deus Ex. #BlackLivesMatter activists are monitored by U.S. Homeland Security and cybersecurity firms. Image: Wikipedia. 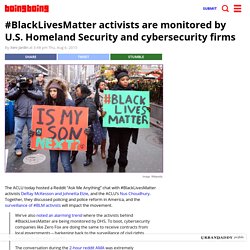 The ACLU today hosted a Reddit “Ask Me Anything” chat with #BlackLivesMatter activists DeRay McKesson and Johnetta Elzie, and the ACLU’s Nus Choudhury. Together, they discussed policing and police reform in America, and the surveillance of #BLM activists will impact the movement. We’ve also noted an alarming trend where the activists behind #BlackLivesMatter are being monitored by DHS. An Unassuming Web Proposal Would Make Harassment Easier. The privacy of countless website owners is at risk, thanks to a proposal in front of the byzantine international organization at the heart of the Internet: ICANN. 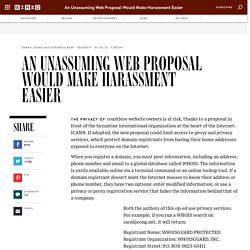 If adopted, the new proposal could limit access to proxy and privacy services, which protect domain registrants from having their home addresses exposed to everyone on the Internet. When you register a domain, you must post information, including an address, phone number and email to a global database called WHOIS. The information is easily available online via a terminal command or an online lookup tool. If a domain registrant doesn’t want the Internet masses to know their address or phone number, they have two options: enter modified information, or use a privacy or proxy registration service that hides the information behind that of a company.

WIRED Opinion About Sarah Jeong is a journalist who graduated from Harvard Law School in 2014. Both the authors of this op-ed use privacy services. But there is some hope. Astuces, Outils et Guides Pratiques pour des Communications En Ligne Plus Sécurisées. How to Deter Doxxing. Last November, Anna Merlan got an unexpected e-mail from Domino’s Pizza. 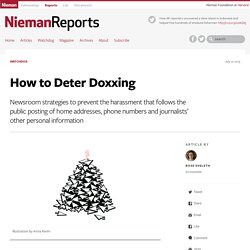 The pizzas she ordered were ready, and she could pay for them in cash when they were delivered. The problem was, she hadn’t ordered pizza, and she no longer lived at the address listed in the e-mail. Merlan shrugged it off, but a few minutes later she started receiving weird tweets. “Hey do you like pizza?” An egg-avatared user asked. Merlan looked at the Domino’s e-mail again: Two large pies, one with triple cheese, triple sausage, triple salami, triple barbecue, hot sauce, half onions and half pineapple, and one with no cheese but triple sausage. The harassment that follows doxxing, a term derived from “doc,” as in “documents,” is like a human distributed denial of service attack—every channel for digital communication is flooded to the point where it becomes unusable. New Internet Standards Could Make Doxing Easier Than Ever.

Doxing has become an all too familiar in the lives of internet-using women. 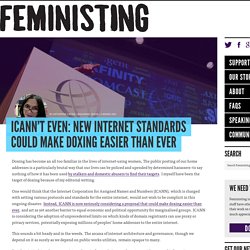 The public posting of our home addresses is a particularly brutal way that our lives can be policed and upended by determined harassers–to say nothing of how it has been used by stalkers and domestic abusers to find their targets. I myself have been the target of doxing because of my editorial writing. One would think that the Internet Corporation for Assigned Names and Numbers (ICANN), which is charged with setting various protocols and standards for the entire internet, would not wish to be complicit in this ongoing disaster. Instead, ICANN is now seriously considering a proposal that could make doxing easier than ever, and act as yet another barrier to equal economic and political opportunity for marginalised groups.

This sounds a bit heady and in the weeds. Such measures tend to disproportionately impact women, minorities, and LGBTQ people because of politicized and prejudicial targeting.