Main Report. Introduction There is a growing policy discussion about how government should act in an environment in which personal information—about both children and adults—is widely collected, analyzed and shared as a new form of currency in the digital economy. 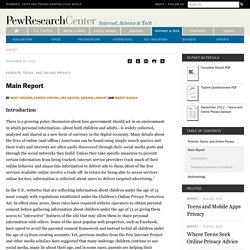 Many details about the lives of online (and offline) Americans can be found using simple search queries and their traits and interests are often easily discovered through their social media posts and through the social networks they build. Unless they take specific measures to prevent certain information from being tracked, internet service providers track much of their online behavior and amass this information to deliver ads to them. Most of the free services available online involve a trade off: In return for being able to access services online for free, information is collected about users to deliver targeted advertising. Parental Concerns and Actions Interaction with strangers worries parents. Strangers Advertiser practices. Uncle Sam and the Illusion of Privacy Online. The U.S. government made twice as many requests for Twitter user information in the last half of 2014 compared with the year before, according to a detailed report out from Twitter this week. 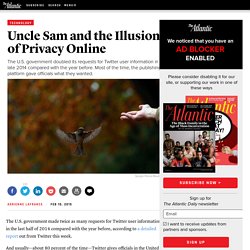 And usually—about 80 percent of the time—Twitter gives officials in the United States what they want. That information might include direct messages, a user's location, IP address, and even deleted tweets. Mostly, government officials are asking for information as part of a subpoena or search warrant (and less often a court order). Twitter has been releasing details about such requests twice a year since 2012 in an effort to promote transparency. 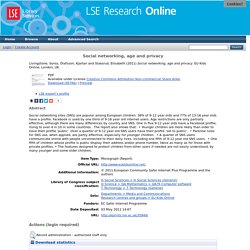 EU Kids Online, London, UK. LSE expert's profile Social networking sites (SNS) are popular among European children: 38% of 9-12 year olds and 77% of 13-16 year olds have a profile. Facebook is used by one third of 9-16 year old internet users. Age restrictions are only partially effective, although there are many differences by country and SNS. "Privacy Issues and Solutions in Social Network Sites" by Xi Chen, et al. Xi Chen, Nanjing UniversityKatina Michael, University of Wollongong Abstract The boom of the internet and the explosion of new technologies have brought with them new challenges and thus new connotations of privacy. 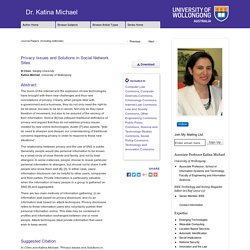 Clearly, when people deal with e-government and e-business, they do not only need the right to be let alone, but also to be let in secret. Not only do they need freedom of movement, but also to be assured of the secrecy of their information. Solove [6] has critiqued traditional definitions of privacy and argued that they do not address privacy issues created by new online technologies. The relationship between privacy and the use of SNS is subtle. There are two main methods of information gathering: (i) an information leak based on privacy disclosure; and (ii) an information leak based on attack techniques. Suggested Citation Xi Chen and Katina Michael. Included in.

Ten low-tech ways to protect your privacy online. The Online Privacy Lie Is Unraveling. A new report into U.S. consumers’ attitude to the collection of personal data has highlighted the disconnect between commercial claims that web users are happy to trade privacy in exchange for ‘benefits’ like discounts. 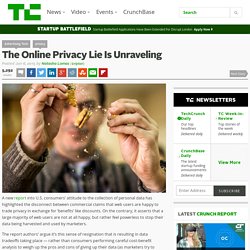 On the contrary, it asserts that a large majority of web users are not at all happy, but rather feel powerless to stop their data being harvested and used by marketers. The report authors’ argue it’s this sense of resignation that is resulting in data tradeoffs taking place — rather than consumers performing careful cost-benefit analysis to weigh up the pros and cons of giving up their data (as marketers try to claim). They also found that where consumers were most informed about marketing practices they were also more likely to be resigned to not being able to do anything to prevent their data being harvested. “Rather than feeling able to make choices, Americans believe it is futile to manage what companies can learn about them. Examples the report notes include — Law Library of Congress. Back to Legal Topics These reports describe the data protection laws of the European Union and of Australia, Canada, France, Germany, Israel, Italy, Japan, Netherlands, Portugal, Spain, Sweden, and the United Kingdom. 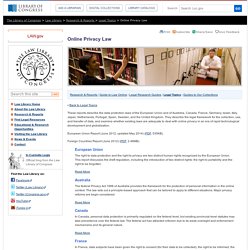 They describe the legal framework for the collection, use, and transfer of data, and examine whether existing laws are adequate to deal with online privacy in an era of rapid technological development and globalization. European Union Report (June 2012; updated May 2014) (PDF, 535KB). Foreign Countries Report (June 2012) (PDF, 2.48MB). European Union The right to data protection and the right to privacy are two distinct human rights recognized by the European Union. The Internet, Children, and Privacy: The Case Against Parental Monitoring by Kay Mathiesen. 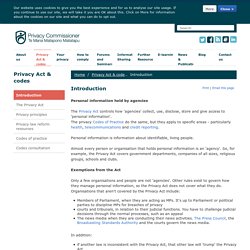