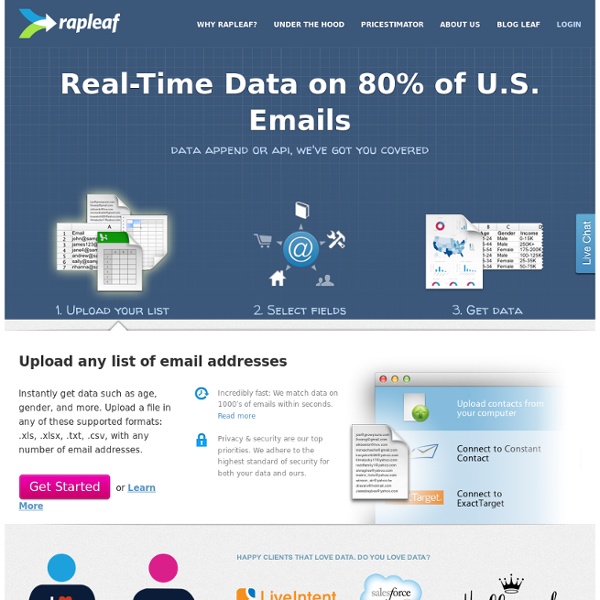 Sendicate: Simply send beautiful emails to people who matter. Phreesia - The Patient Check-in Company Everything We Know About What Data Brokers Know About You June 13, 2014: This story has been updated. It was originally published on March 7, 2013. We've spent a lot of time this past year trying to understand how the National Security Agency gathers and stores information about ordinary people. Consumer data companies are scooping up huge amountsof consumer information about people around the world and selling it, providing marketers details about whether you're pregnant or divorced or trying to lose weight, about how rich you are and what kinds of cars you drive. The Federal Trade Commission is pushing the companies to give consumers more information and control over what happens to their data. It's very hard to tell who is collecting or sharing your data—or what kinds of information companies are collecting. Here's a look at what we know—and what we don't—about the consumer data industry. How much do these companies know about individual people? The companies also collect data about your hobbies and many of the purchases you make. Yes.

29 Social Media Tools Recommended by the Pros Are you looking for ways to enhance your social media marketing? Do you want new tools to simplify your job? We asked a group of social media pros for the hottest social media tools they use today. Check them out to see if these social media tools are a good fit for you! #1: RivalIQ Jay Baer Figuring out precisely what works in social media is a tricky (yet entirely necessary) proposition. I’m always seeking to improve clicks, shares and social media engagement on my own content as well as our Convince and Convert clients’ content. Recently, I started using RivalIQ to get at what’s working in social, and this easy-to-use, reasonably priced analysis platform produces a steady stream of insights while saving me a ton of time. Here, I set up a collection of consumer products companies (RivalIQ calls them a “landscape”) for a strategic plan we’re building. RivalIQ provides competitive intelligence. Today, as the industry matures, social media is less about colonization, and more about optimization.

Amazon Sales Rank Tracking &amp; Analysis Adam Curtis: “We don't read newspapers because the journalism is so boring” Adam Curtis remains at the forefront of documentary filmmaking. He began in the early 80s, but his first major breakthrough came in 1992 with Pandora’s Box, a film which warned of the dangers technocratic politics and saw him pick up his first of six career BAFTAs. Holed up in a BBC basement, Curtis brings together disparate subjects and uses archival footage to chart political history. In his 2004 film, Power of Nightmares, his most remarkable piece of work to date, Curtis debunked the myth that al-Qaeda was an organised global network posing an apocalyptic threat to the West, which, In a post-911 context that saw governments and mass media exaggerating al-Qaeda’s size and influence, was a bold message. All Watched Over by Machines of Loving Grace (2011) After a six month chase attempting to secure an interview, I finally came into contact with him at the Latitude Festival where he was discussing static culture, his latest area of fascination. What could Savages do? Yeah. Exaggerating?

5 Hashtag Tracking Tools for Twitter, Facebook and Beyond Are you using hashtags in your social media campaigns? Do you want to find tools to help manage your hashtags? The right tools can help you launch, track and analyze hashtags across social networks. In this article, you’ll discover five tools that make it easy to track hashtags and their related conversations. Why Use a Hashtag? Hashtags make it easier for people to find and follow discussions about brands, events and promotions. Hashtags can determine how easily you can target and track a campaign. Can you imagine how many posts (tweets or otherwise) contain #chocolate every minute? It’s worth the effort (and your sanity) to come up with a unique hashtag that fits with your particular campaign. A good example is Subway’s #januANY campaign. Subway uses hashtags that are memorable and easy to track. As you’re choosing a hashtag, follow Subway’s lead. Read on to discover five tools that can effectively track, analyze and report how others are using your hashtag. Bonus Tools Just for Twitter

asymco | Curated Market Intelligence How He Used Facebook to Win | by Sue Halpern Prototype Politics: Technology-Intensive Campaigning and the Data of Democracy by Daniel Kreiss Oxford University Press, 291 pp., $99.00; $27.95 (paper) Hacking the Electorate: How Campaigns Perceive Voters by Eitan D. Cambridge University Press, 261 pp., $80.00; $30.99 (paper) Not long after Donald Trump’s surprising presidential victory, an article published in the Swiss weekly Das Magazin, and reprinted online in English by Vice, began churning through the Internet. According to Grassegger and Krogerus, Cambridge Analytica had used psychological data culled from Facebook, paired with vast amounts of consumer information purchased from data-mining companies, to develop algorithms that were supposedly able to identify the psychological makeup of every voter in the American electorate. Even more troubling was the underhanded way in which Cambridge Analytica appeared to have obtained its information. And this was just Facebook. There were other digital innovations as well. In Detroit, Mrs.

4 Social Media Tools to Improve Your Social Media Marketing Are you struggling with day-to-day social media marketing tasks? Are you looking for tools to speed up your social tasks? In this article, I’ll share four social media tools and tips to help community managers save time, show creativity and streamline community management for their companies. Why Social Media Tools Community managers for organizations of all sizes are tasked to cover everything from curating content to creating it. Customer support, marketing, Vine and webinars all fall into the mix. The sheer volume of tasks can be overwhelming. Keep reading for four social media tools that will make your social media tasks much easier. #1: Manage the Appearance of Links to Your Website With Facebook Debugger We all know Facebook updates that include pictures and snippets of their content do unbelievably better than ones that publish bare links. Has this ever happened to you? If Facebook has trouble finding an image to include with your link, the preview can take a long time to show up.

New Snapchat Map Feature Is Exposing Cheaters Snapchat has turned everyday users into private detectives by allowing us to view our friends’ locations on a new Snapchat map feature, accessible through the app. You don’t have to be Sherlock to see what your friends or lovers are doing without you, thanks to the opt-in update that came out last Wednesday. Now, when you open Snapchat and pinch the Stories screen (yes, pinch) a map will appear with bitmoji versions of all your friends. Users, experts, and parents have shared concerns over the safety of the new update. Even though the update is optional, and the location is only shared with mutual friends (friends who follow one another), some may not realize that their location is shared every time they open the app. For other users, they’re less concerned about safety and more concerned about maintaining their covert infidelity. Or have your chronic lateness exposed.