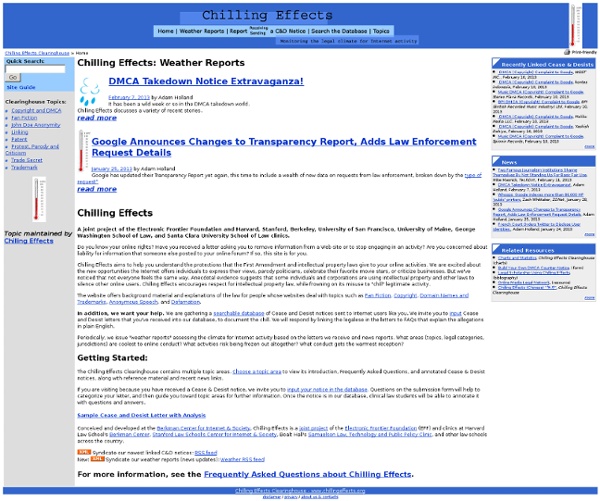 March 26, 2014 by Chilling Effects StaffFor those of you who are following the ongoing controversy surrounding Twitter in Turkey, Chilling Effects is pleased to be able to host two new documents recently received by Twitter from various aspects of Turkish law enforcement and government. [Update 2013-03-26] A Turkish court has issued a temporary injunction on Wednesday ordering access to Twitter restored until it can deliver its full verdict on the ban. A joint project of the Electronic Frontier Foundation and Harvard, Stanford, Berkeley, University of San Francisco, University of Maine, George Washington School of Law, and Santa Clara University School of Law clinics. Do you know your online rights? Have you received a letter asking you to remove information from a Web site or to stop engaging in an activity? Are you concerned about liability for information that someone else posted to your online forum?

Wendy’s Blog: Legal Tags Law enforcement demands to domain name registrars were a recurring theme of the 42d ICANN public meeting, concluded last week in Dakar. The Governmental Advisory Committee (GAC) took every opportunity at its public meetings with GNSO and Board, and in its Communique to express dismay, disappointment, and demands for urgent action to “reduce the risk of criminal abuse of the domain name system.” This conversation about domain name abuse benefits from a multi-stakeholder environment, where it can include domain registrars, registrants, and Internet users, along with law enforcement representatives.

Have You Been Writing Your Own Poetry? - Download Our Author's Guide At FriesenPress, we respect your privacy. Any and all personal information that we collect is strictly used for the purposes of conducting business with you. Under no circumstances will we ever sell or rent your personal information to any third parties. What information do you typically collect?

Never Make a Promise You Can't Keep- Especially in Your Privacy Policy : Privacy Law Blog Expect the unexpected from your Web site privacy policy. In a handful of cases, including two which were recently decided, companies have been thwarted in various, unexpected ways by the commitments made in their online privacy policies. Are your intellectual property litigators reading your privacy policy? In FenF, LLC v. Healio Health, Inc., No. 5:08-CV-404 (N.D. OH July 8, 2010), the court held that a provision from a settlement agreement entered into by FenF, LLC (“FenF”), the plaintiff, and Healio Health, Inc.

The Orwell Project: Hasan Elahi’s Anti-Terrorism Art Nearly a decade after Mohammad Gulab and his fellow villagers rescued and protected wounded Navy SEAL Marcus Luttrell, they remain Taliban targets—but they’ve never regretted their kindness. Nearly eight-and-a-half years after Mohammad Gulab and his fellow villagers harbored and saved the life of a gravely wounded U.S. Navy SEAL, they say they are still proud of their courageous action and would do it again in spite of the disappointments and troubles that have followed. In the face of point-blank Taliban threats to overrun the small village of Sabray in remote Kunar Province, along the porous and mountainous frontier with Pakistan, the villagers bravely protected, gave first aid to, fed, and clothed Marcus Luttrell, the wounded Special Warfare Operator, the only survivor of a four-man SEAL patrol. The Taliban have made no secret that Gulab, his family and other villagers who assisted Luttrell remain marked men.

Michael Zimmer.org » Blog Archive » Facebook’s Zuckerberg: “Having two identities for yourself is an example of a lack of integrity” Facebook’s Mark Zuckerberg has a history of speaking his mind on privacy, and what he speaks is often fraught with problems, ignorance, and arrogance. For example: He’s spoken wistfully about the desire to get people over the “hurdle” of wanting to preserve some semblance of privacy online.He’s proclaimed that social norms on privacy have changed, and that Facebook is merely reacting to these shifting norms.His remarks also often reveal his failure to recognize the complexity of the issues of privacy — and trust — between users and Facebook. But, today, I found a new statement that brings Zuckerberg’s hubris to a new level. SocialBeat has a very thoughtful piece urging Zuckerberg to be forthright and explain what he truly and genuinely believes about privacy. While searching for evidence of Zuckerberg’s broader philosophy of information, a passage from David Kirkpatrick’s forthcoming book, The Facebook Effect, is quoted:

Location-Software Maker Sues Google, Saying It’s Being Evil (& Microsoft-like) Skyhook, the tiny Massachusetts company that created the location software in your iPhone, sued Google this week (pdf). David is charging Goliath with trying to keep its software out of Google’s Android mobile software platform in favor of Google’s own location service, and with encouraging Skyhook’s partners to break contracts. In other words, Google is leveraging its OS market share to push its own affiliated products and snuff out competitors — kind of like Microsoft did with Internet Explorer on Windows 15 years ago. Yikes. 10 paths and they're all hard We spent a couple days on mountain bikes in Switzerland recently. We got lost a lot. We didn't use GPS or geo-location-apps. We didn't really know where we were going, but we sort of had faith in our legs and our bicycles that we'd somehow get up and back down. It was good to get out on a mountain. It clears my head.

Speech: “The English Law of Privacy: An Evolving Human Right” – Lord Walker On 25 August 2010 Supreme Court Justice Lord Walker of Gestingthorpe gave a speech to Anglo-Australasian Lawyers Society at Owen Dixon Chambers, Melbourne on the subject of privacy. His title was “The English Law of Privacy: An Evolving Human Right“. The lecture contains an interesting an useful overview of the current law of privacy, particularly in relation to the media. Lord Walker suggests that, as the law of privacy develops “its origin in the law of confidence will become a historical curiosity” and that we have now reached the point where “invasion of personal privacy” is a separate tort. He emphasises the importance of “the discipline of analysing an issue correctly“, considering first the question of interference with Article 8 rights and second that of the justification for that interference. He goes on to contrast the approach in England (and Strasbourg) with that in Australia and New Zealand

EU data protection law must be clearer and be fit for the digital age, says ICO Login to IWR Brussels review of IP laws needs to be handled with care Any review of the European regime needs to complement and support intellectual Property (IP) as a dr... Self-regulation will help businesses to keep up with the web laws The European Union (EU) directive on web cookies came into force on May 26, 2011 and the Information... Small software companies need IP regime that enables them to flourish