THIS Is Why Parents Need To Disable In App Purchases. You’ve read the stories, kid racks up $$$$ of In-App purchases on their iTunes account using parents credit card, parent then tries to get the money back from Apple… This game review from Justin and Brian from IGN Entertainment (video shown below) of this iPhone game shows parents exactly why you need to disable In-App purchases on your mobile devices. 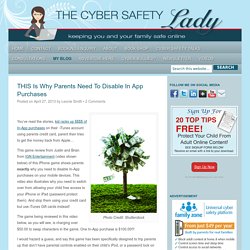 This video also illustrates why you need to switch over from allowing your child free access to your iPhone or iPad (password protect them). And stop them using your credit card but use iTunes Gift cards instead! The game being reviewed in this video below, as you will see, is charging over $50.00 to swap characters in the game. One In-App purchase is $100.00!!! Social Media Privacy Settings Are Important - We all enjoy keeping up with friends and family on social media, but we have to be mindful of our privacy and security when we do. 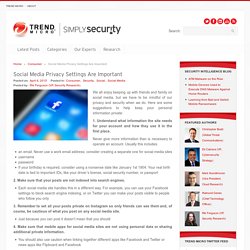 Here are some suggestions to help keep your personal information private: 1. Understand what information the site needs for your account and how they use it in the first place. Protect your privacy: take control of social networking. Social Networking Maintaining privacy on social networks is much like hanging all your dirty laundry on a highway billboard—and then asking only your friends to look. 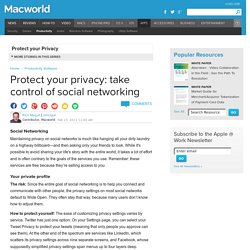 While it's possible to avoid sharing your life's story with the entire world, it takes a lot of effort and is often contrary to the goals of the services you use. Remember: these services are free because they’re selling access to you. Your private profile. How to Check Social Media Privacy Settings. Are you concerned about your online privacy? 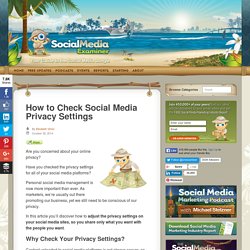 Studies Show That Millennials Are Most Vulnerable to Scams. Who’s most likely to be a victim of online and phone fraud? 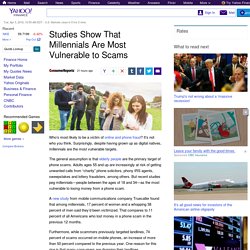 It’s not who you think. Surprisingly, despite having grown up as digital natives, millennials are the most vulnerable targets. The general assumption is that elderly people are the primary target of phone scams. Adults ages 55 and up are increasingly at risk of getting unwanted calls from “charity” phone solicitors, phony IRS agents, sweepstakes and lottery fraudsters, among others. But recent studies peg millennials—people between the ages of 18 and 34—as the most vulnerable to losing money from a phone scam. A new study from mobile communications company Truecaller found that among millennials, 17 percent of women and a whopping 38 percent of men said they’d been victimized. Furthermore, while scammers previously targeted landlines, 74 percent of scams occurred on mobile phones, an increase of more than 50 percent compared to the previous year. How To Protect Your Credit Cards From Being Skimmed. LOS ANGELES (CBSLA.com) — The average American owns at least four credit cards. 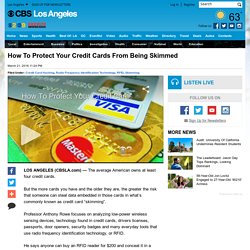 But the more cards you have and the older they are, the greater the risk that someone can steal data embedded in those cards in what’s commonly known as credit card “skimming”. Professor Anthony Rowe focuses on analyzing low-power wireless sensing devices, technology found in credit cards, drivers licenses, passports, door openers, security badges and many everyday tools that use radio frequency identification technology, or RFID. How Crooks Are Stealing Credit Card Information - Video - WDIV Detroit. Control What Shows Up When Someone Googles Your Name: Step-By-Step Guide to Personal SEO for Students - College Raptor Blog.

Google is a wonderful tool. 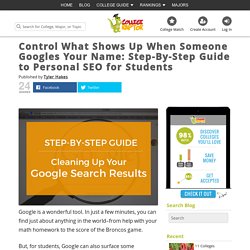 In just a few minutes, you can find just about anything in the world–from help with your math homework to the score of the Broncos game. But, for students, Google can also surface some less-than-ideal results when potential employers or college admissions reps search for them online. While it may seem like an afterthought to some students, the truth is that your reputation can be easily damaged by a simple internet search. Cyber Risk Report 2016: Threat Landscape, Vulnerabilities & Defense.

Inside the secret world of teens and social media. Auto. 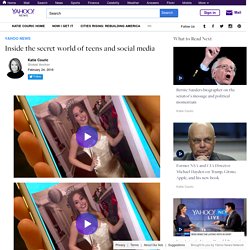 Untitled. Seven Cyber Security Predictions for 2016. James Veitch: This is what happens when you reply to spam email. App Store Hack: A list of iPhone apps infected with malware. Apple fans have been criticizing Android for years, fighting back against “walled garden” claims by suggesting that Android’s open nature makes it far more susceptible to hacks and malware. 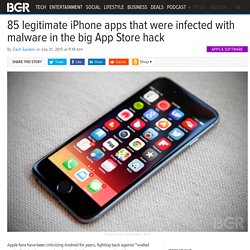 This is indeed often the case, but if you think Apple’s closed iOS app ecosystem isn’t also vulnerable to attacks, think again. Millions upon millions of iPhone and iPad users were affected by a major App Store hack that was just uncovered, and now we have a list of some of the apps that have reportedly been infected with malware. Apple warning lists top 25 apps infected in massive App Store malware attack. 5 Things You Do Everyday That Make You Vulnerable Online. You probably don’t realize it, but some of the simple things you do on the web everyday could be putting you and your computer at risk. 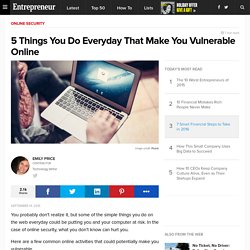 In the case of online security, what you don’t know can hurt you. Here are a few common online activities that could potentially make you vulnerable. 1. Using public Wi-Fi networks. Untitled. Leading School Service Providers Pledge to Advance Student Data Protections for Student Personal Information. Yahoo Tech. The LinkedIn request seemed ordinary enough. A technology journalist named “Jenifer Lawrence” had asked to connect to me. I clicked OK without thinking. Then I took a closer look at her profile.

This is how websites track you on the Internet. The Vault Apps That Keep Sexts a Secret. Photo When students were caught participating in an illicit photo ring that was operating out of a high school in Cañon City, Colo., parents and school officials there were quick to say that kind of thing was surely happening all over the country. They’re not exactly wrong. With the growth in mobile devices, sexting has become even more prevalent than when it first received widespread attention. A study of several Texas high schools found that more than a quarter of the students reported having sent a naked photo of themselves, even though they were likely to report feeling bothered by being asked for one.

They are following a path started by adults, who report that sexting makes them feel more sexually fulfilled, according to a recent survey by Drexel University. This Android malware is so bad, you might be better off buying a new phone. We've seen Android malware that takes your photos and videos for ransom, and there's one that can mimic your phone's shutdown process and spy on you even though the phone appears to be off. But a new family of malware, detailed by security firm Lookout on Wednesday, is probably the scariest we've heard of: It's so hard to remove that, in some cases, victims might be better off just buying a new device. Lookout's researchers have found 20,000 samples of three pieces of malware, named Shedun, Shuanet, and ShiftyBug, which share a lot of the same code and use similar tactics to infect the victim's phone.

Once installed — usually from a third-party app store — these apps root the victim's device, embed themselves as system-level services, and shapeshift into legitimate, popular apps, including Facebook, Candy Crush, Twitter, Snapchat, WhatsApp and others. What makes these apps especially ominous is their relatively tame level of activity. How to see all the companies tracking you on Facebook — and block them. Update: Instagram says private photos were only public by user choice. When I catch up with Terry Gilliam to discuss his excellent new memoir, Gilliamesque: A Pre-Posthumous Memoir, I immediately tell him that after reading it, I’ve finally figured out his role in the early days of his career with Monty Python.

“You were the George Harrison of the Pythons,” I tell Gilliam, whom I’ve interviewed on many occasions, and who has shared stories about his friendship with the former Beatle with me in the past. 7 ways to avoid identity theft. Ashley Judd responds to continued Twitter trolling. Actress and Kentucky Wildcats superfan Ashley Judd said earlier this week that she will press charges against the people who send harrassing tweets her way. The decision sparked the latest round of online abuse, with many on Twitter chiming in to say Judd just wants attention, that she needs to learn to ignore what is said online. They said that she deserved it this time, because she sent a tweet calling the Arkansas players "dirty" and was talking smack of her own. Facebook will pay you serious cash to make the internet more secure.

The growth of the Internet as a ubiquitous part of life has made social networks and mobile devices more vulnerable to attack, with the users themselves often the weakest link. Here are the top 10 cyber security threats that experts suggest non-techy people must be trained to recognise. Social network attacks are a serious cyber security threat due to the popularity of social networks, which users can access not only by computer, but also by mobile phone. Subscribing to social networks such as Facebook via mobile phone also means that users transmit their mobile numbers to the web and thus become a target for hackers who are searching for the personal information of Internet users.