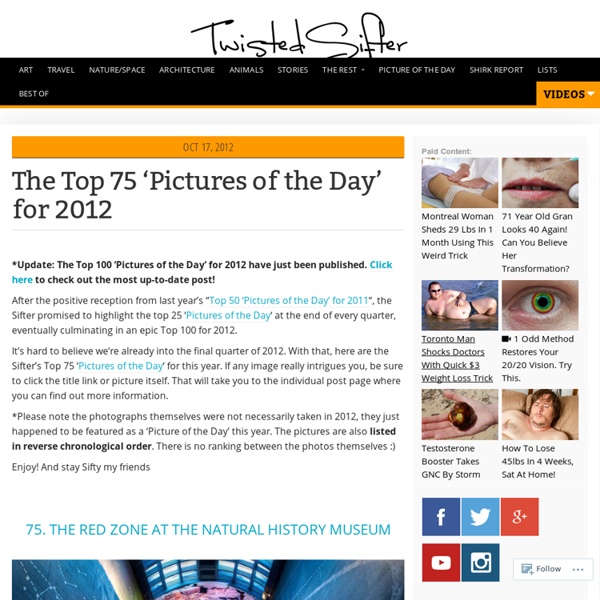 20 Very Interesting Photos From The '30s I love old photos because this is the only way I can really see our history. I like to check out the details such as clothing, decorations or food products because is not only interesting to see their habits but also how these evolved during decades or centuries. The images below were taken in the ’30s in various circumstances from an ice-skating scene and all the way to a legendary image with Stalin fooling around. I hope that you like them as much as I do.

s Amazing Images These are pictures that have no clear category, but are all beautiful, elegant, or timely in their own way. I'm sure you've seen some of them, but I hope you still enjoy all of them. The imprint in the snow of an owl attacking its prey. 25 Cool Ideas To Display Family Photos On Your Walls Family portrait by Lori Andrews (via designcrushblog) We all have family photos that we love. Most of them live well in photo albums but the best of them could and should be displayed throughout the house. 45 Perfectly Timed Photographs That Will Leave You Stunned Chance, position, timing, angles, lighting, and being in the right place at exactly the right moment make these photographs some of the most intriguing and mind-bending pictures of all-time. Explore the perfect timing of capturing lightning strikes on skyscrapers. The perfect timing of snapping a friend’s picture just as a bicycle crashes into a pole. See the perfect angles and timing as Buddha snatches an airplane from the sky and a crane snatches the Eiffel Tower from the ground. Explore the unbelievable moment of a Praying Mantis riding his organic bicycle. Laugh at the uncanny shot of an official being Crowned by the King of Beers at mid-court of a San Antonio Kings basketball game.

America: 50 States in 50 Photos - In Focus In the past, I've composed many photo essays that took viewers on virtual tours of distant countries. Today, I decided to do the same thing, but focus closer to home, collecting one recent photograph from each of the 50 states in the United States of America. The photographs are not necessarily meant to represent the whole of any state. 88 Brilliant Examples of Forced Perspective Photography Forced perspective is a technique that employs optical illusion to make an object appear farther away, closer, larger or smaller than it actually is. It is used primarily in photography, filmmaking and architecture. It manipulates human visual perception through the use of scaled objects and the correlation between them and the vantage point of the spectator or camera. There are many ways to attack photography and some are much more expensive than others. Here in this showcase, we presenting a Stunning collection of Forced Perspective Photography and Pictures taken by various artists in which all pictures are linked to the author’s pages. You may want to explore further works of the photographers we’ve featured below.

Postmodernism, a photo from Lisboa, South Critiques | Translate belido Olá Gonçalo, 20 of The World's Most Powerful Photographs Viewing 1 of 20 Starving boy and missionary Viewing 2 of 20 Inside an Auschwitz gas chamber Art & Photography For some people, being human isn't good enough. There are people who are more interested in living in another realm and it's made "possible" thanks to various online games or even apps that allow you to "cartoon yourself" or "zombie yourself". I suppose everyone has day dreams about living in a different time period or [...] 46 of the most amazing photographs of 2012 2012 has been a great year in it's own way. It may have been full of ups and downs, victories and losses, successes and disappointment (as with pretty much any year). But how ever you've found it.

Cushion Geometrical illusion with stereoscopic impressions "A bulge" The floor appears to bulge out, even though all the squares in the figure are equal. Copyright A.Kitaoka 1998 "Modern" geometrical illusion --- "Classic" geometrical illusion "A beetle" Animals Illuminated by the Sun The time of sunset is defined in astronomy as the moment when the trailing edge of the Sun’s disk disappears below the horizon in the west. There are few things in nature as photogenic as the sky at sunset, especially animals. The rich bright gold, pink and orange colors make unusually beautiful pictures of animals illuminated by the sun. Source Source Source