Some Strange Things Are Happening To Astronauts Returning To Earth 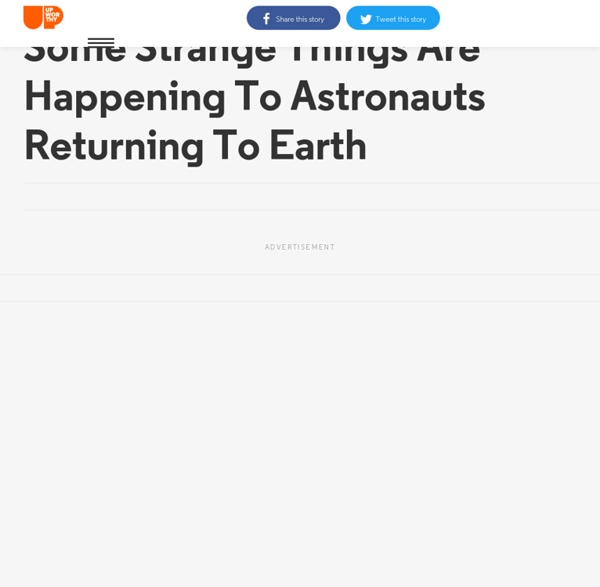 LENKA LYRICS - Everything At Once As sly as a fox, as strong as an ox As fast as a hare, as brave as a bear As free as a bird, as neat as a word As quiet as a mouse, as big as a house All I wanna be, all I wanna be, oh All I wanna be is everything As mean as a wolf, as sharp as a tooth As deep as a bite, as dark as the night As sweet as a song, as right as a wrong As long as a road, as ugly as a toad Scientific Proof Thoughts & Intentions Can Alter The Physical World Around Us Dr. Masaru Emoto, a researcher and alternative healer from Japan has given the world a good deal of evidence of the magic of positive thinking. He became famous when his water molecule experiments featured in the 2004 film, What The Bleep Do We Know? His experiments demonstrate that human thoughts and intentions can alter physical reality, such as the molecular structure of water.

What you need to know about artificial intelligence, and the imminent robot future Do androids dream of electric sheep? That's unclear, but I know for sure that every kid dreams of intelligent, thinking robots -- certainly every kid who goes on to work at CNET, in any case. Today, my sci-fi-fuelled childhood fantasies of a bot with a "brain the size of a planet" are closer than ever to being realised. Artificial intelligence, or AI, the practice of making a machine behave in a smart way, is already changing our world and is, by my reckoning, the most fascinating field of technology right now. But, as one professor I spoke to for this story put it, the "audacity of the attempt to build an intelligent machine" comes with a responsibility to know what we're meddling with. For everyone who ever thumbed through a copy of "I, Robot", mouth agape, here's what you need to know about AI in 2015.

5 Painless Steps for Getting Rid of the Fear of Street Photography Once and for All “Look at me,” he said. Complying, I turned in the man’s direction. “Look me in the eyes!”… I tried to raise my eyes and look into his, but I couldn’t. Actually, I couldn’t look anyone in the eyes at that point, it felt weird and uncomfortable. 7 Of The Best Movies For Grownups Hollywood sees you, older moviegoers. In case you haven't noticed, there have been a slew of films in recent years catering to older viewers on issues ranging from love and sex (or lack thereof) after 50 to more somber subjects like coping with loss. Why? Well, post 50s are heading to the movies more and more and the industry can't deny the numbers.

The Best Music Websites For Learning English Check out my New York Times post for English Language Learners focuses on using music for language development and includes a student interactive, video, and teaching ideas. I use music a lot in my teaching of English Language Learners. I thought people might find it helpful to see which sites I believe to be the best out there to help teach English — Beginning, Intermediate, and Advanced — through music. My students have certainly found them helpful. Top 10 Strangest Things In Space Space Let’s be honest: space is an absolutely crazy place. Most science fiction writers throw in a planet with two stars that looks vaguely like Southern California, and call it a day.

Robots master skills with ‘deep learning’ technique Robot learns to use hammer. What could go wrong? (credit: UC Berkeley) UC Berkeley researchers have developed new algorithms that enable robots to learn motor tasks by trial and error, using a process that more closely approximates the way humans learn. They demonstrated their technique, a type of reinforcement learning, by having a robot complete various tasks — putting a clothes hanger on a rack, assembling a toy plane, screwing a cap on a water bottle, and more — without pre-programmed details about its surroundings. A new AI approach