Eyes on the Solar System 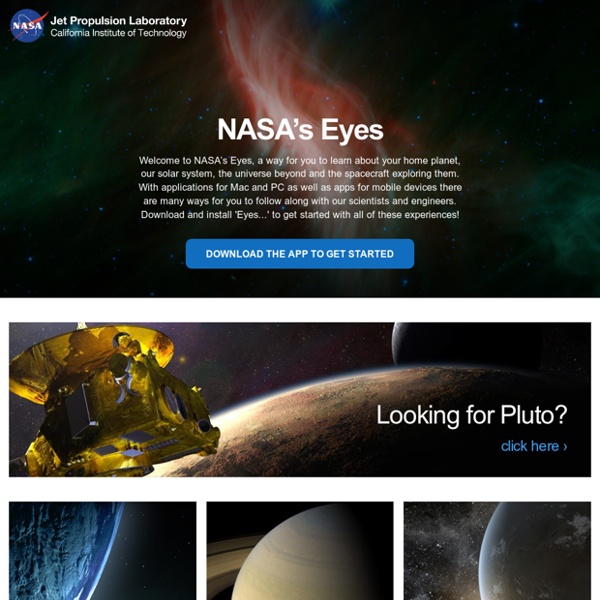 2012 - 10 - Meet ESA, the space agency for Europe Meet ESA, the space agency for Europe 4.88 /5 ( 57 votes cast) Rate this Video Visualize this: Is it information or is it art? By John Grimwade An old infographic chestnut. It’s always been a tricky balance between getting the story across, and making a great image. Orbiting Earth 101: What You’d See / What You’d Do “I saw for the first time the earth’s shape. I could easily see the shores of continents, islands, great rivers, folds of the terrain, large bodies of water. The horizon is dark blue, smoothly turning to black. . . the feelings which filled me I can express with one word–joy.” -Yuri Gagarin

NASA Supermassive-Black-Hole Gravity Discovery: "Confirms Einstein's Theory of Space-Time" Two X-ray space observatories, NASA's Nuclear Spectroscopic Telescope Array (NuSTAR) and the European Space Agency's XMM-Newton , have teamed up to measure definitively, for the first time, the spin rate of a black hole with a mass 2 million times that of our sun that lies at the dust- and gas-filled heart of a galaxy called NGC 1365 (image above). Measuring the spin of a supermassive black hole is fundamental to understanding its past history and that of its host galaxy. The observations are a powerful test of Einstein's theory of general relativity, which says gravity can bend space-time, the fabric that shapes our universe, and the light that travels through it.

"Visualizing 'Big Data' in the Arts and Humanities On Wednesday, September 26, 2012 from 3:00pm to 4:30pm in 150A Thompson Library, the Humanities Institute and the Digital Arts and Humanities Working Group will host a panel discussion on "Visualizing 'Big Data' in the Arts and Humanities.” Panelists David Staley (History), Jessie Labov (Slavic & East European Languages & Cultures), and H. Lewis Ulman (English) will explore the place of data visualization as a form of humanities scholarship, with visualization as the hermeneutic act that allows humanists to read “big data.” The panel will describe the creation of the Humanities Visualization Studio at The Ohio State University to conduct such humanistic readings of big data. Questions will center around defining “big data” in the context of the humanities, how humanists read big data, how our interests and goals with reading big data differ from that of scientists, and how visualization and visual hermeneutics is critical to the effort to read that data.

Giant Ribbon Discovered at the Edge of the Solar System + Play Audio | + Download Audio | + Join mailing list October 15, 2009: For years, researchers have known that the solar system is surrounded by a vast bubble of magnetism. Called the "heliosphere," it springs from the sun and extends far beyond the orbit of Pluto, providing a first line of defense against cosmic rays and interstellar clouds that try to enter our local space. Although the heliosphere is huge and literally fills the sky, it emits no light and no one has actually seen it.

Send a Postcard to Curiosity! - Mars Science Laboratory Send a Postcard to Curiosity! Share53 Share57 PrevNext The MARS Journal Vol 5, pp 76-128 - Geologic mapping and characterization of Gale Crater and implications for its potential as a Mars Science Laboratory landing site 1Ryan B. Anderson and 1James F. Bell III Why Is Data Visualization So Hot? Noah Iliinsky is the co-author of Designing Data Visualizations and technical editor of, and a contributor to, Beautiful Visualization, published By O’Reilly Media. He will lead a Designing Data Visualizations Workshop at O’Reilly’s Strata conference on Tuesday, Feb. 28. Data visualization is hot. All of a sudden there are dozens of companies and products that want to help you visually analyze your data, build your own visualizations, and visually display interesting data sets of all kinds. So, why is visualization interesting?