Look. Hopper%201.pptx. Comparing Hopper and Rockwell (Both and whereas) Chris Burden Biography, Art, and Analysis of Works. "I had an intuitive sense that being shot is as American as apple pie. 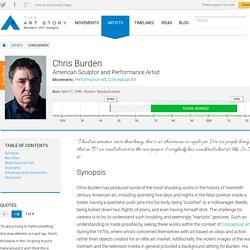 We see people being shot on TV, we read about it in the newspaper. Everybody has wondered what it's like. So I did it. " Synopsis Chris Burden has produced some of the most shocking works in the history of twentieth century American art, including spending five days and nights in the fetal position inside a locker, having a spectator push pins into his body, being "crucified" to a Volkswagen Beetle, being kicked down two flights of stairs, and even having himself shot. Key Ideas Chris Burden's seemingly outrageous performances were in fact authentically intentioned. The artist wanted to portray the reality of pain to the audience at a time when people had become desensitized to the plethora of television images of injured and dead American soldiers in Vietnam and the general dominance of violence in media imagery. 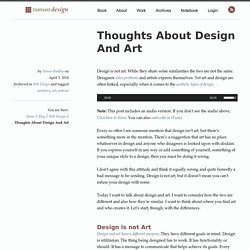 While they share some similarities the two are not the same. Designers solve problems and artists express themselves. Yet art and design are often linked, especially when it comes to the aesthetic layer of design. Note: This post includes an audio version. If you don’t see the audio above, Click here to listen. Every so often I see someone mention that design isn’t art, but there’s something more in the mention. I don’t agree with this attitude and think it equally wrong and quite honestly a bad message to be sending.

Today I want to talk about design and art. Design is not Art Design and art have a different purpose. Designers can increase their value the more they know and understand art Art on the other hand is its own end. Design and art have a different process to creation. Art has no constraints initially and ultimately only those constraints imposed by the artist or the work itself. Kandinsky, quotes on painting art, color & line + biography. DAVID HOCKNEY: HOME. Carolee Schneemann Biography, Art, and Analysis of Works. "I always thought, 'This is something they need. 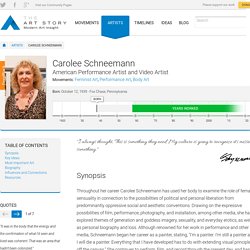 My culture is going to recognize it's missing something.'" Synopsis Throughout her career Carolee Schneemann has used her body to examine the role of female sensuality in connection to the possibilities of political and personal liberation from predominantly oppressive social and aesthetic conventions. Drawing on the expressive possibilities of film, performance, photography, and installation, among other media, she has explored themes of generation and goddess imagery, sexuality, and everyday erotics, as well as personal biography and loss. Although renowned for her work in performance and other media, Schneemann began her career as a painter, stating, "I'm a painter. 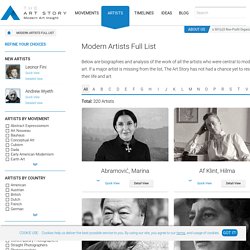