The 50 Most Controversial Films 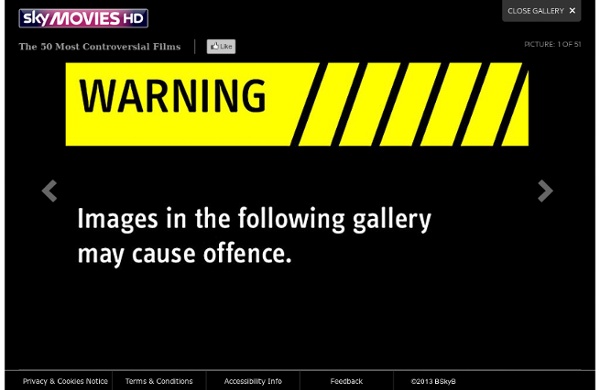 Steven Soderbergh: State of Cinema First of all, is there a difference between cinema and movies? Yeah. If I were on Team America, I’d say “Fuck yeah!” s 100 YEARS...100 LAUGHS AFI Announces The 100 Funniest American Movies Of All Time. TOOTSIE, DR. STRANGELOVE, ANNIE HALL and DUCK SOUP Complete The Top Five Movies LOS ANGELES, June 14, 2000 — The American Film Institute (AFI) announced the 100 funniest American films, as selected by a blue-ribbon panel of leaders from across the film community, last evening during a three-hour special television event. SOME LIKE IT HOT, the 1959 classic starring Marilyn Monroe, Tony Curtis and Jack Lemmon which was written, directed and produced by Billy Wilder was ranked #1. Following SOME LIKE IT HOT in the top 10, in order, were: TOOTSIE (#2), DR.

Quentin Tarantino Lists His Favorite Films Since 1992 Yup, we mentioned Quentin Tarantino last week, and we’re doing it again this week because Rosario has unearthed this nice clip. In six snappy minutes, Tarantino (director of Pulp Fiction, Reservoir Dog, Inglorious Basterds, etc) lists his favorites films made since 1992 — when he, himself, started making films. You’ll know some of these titles, but likely not others.

Woody Allen Lists the Greatest Films of All Time: Includes Classics by Bergman, Truffaut & Fellini We’ve looked this week at the favorite movies selected by such respected filmmakers as Stanley Kubrick and Martin Scorsese. Today we round out this trio of eminent directors with the greatest films of all time according to Woody Allen, voting in the almighty Sight and Sound poll. The director of Annie Hall, Crimes and Misdemeanors, and Midnight in Paris selected, in no particular order, the following: