Movements and Styles in Modern Art 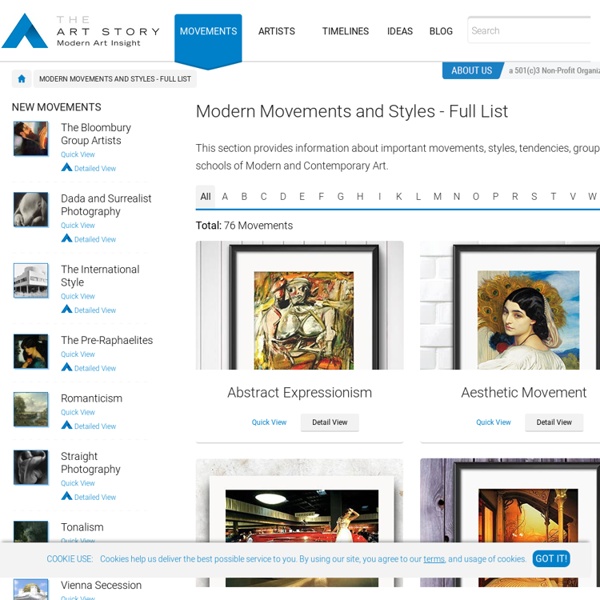 IMAGE JUNIOR Art movement An art movement is a tendency or style in art with a specific common philosophy or goal, followed by a group of artists during a restricted period of time, (usually a few months, years or decades) or, at least, with the heyday of the movement defined within a number of years. Art movements were especially important in modern art, when each consecutive movement was considered as a new avant-garde. Concept[edit] According to theories associated with modernism and the concept of postmodernism, art movements are especially important during the period of time corresponding to modern art.[1] The period of time called "modern art" is posited to have changed approximately half-way through the 20th century and art made afterward is generally called contemporary art. Also during the period of time referred to as "modern art" each movement was seen corresponding to a somewhat grandiose rethinking of all that came before it, concerning the visual arts. 19th- and 20th-century art movements[edit]

Max Ernst Biography, Art, and Analysis of Works | The Art Story "Painting is not for me either decorative amusement, or the plastic invention of felt reality; it must be every time: invention, discovery, revelation." Synopsis German-born Max Ernst was a provocateur, a shocking and innovative artist who mined his unconscious for dreamlike imagery that mocked social conventions. A soldier in World War I, Ernst emerged deeply traumatized and highly critical of western culture. Key Ideas Max Ernst attacked the conventions and traditions of art, all the while possessing a thorough knowledge of European art history. Ernst was profoundly interested in the art of the mentally ill as a means to access primal emotion and unfettered creativity. Ernst was one of the first artists to apply Sigmund Freud's dream theories investigate his deep psyche in order to explore the source of his own creativity. Interested in locating the origin of his own creativity, Ernst attempted to freely paint from his inner psyche and in an attempt to reach a pre-verbal state of being.

Thoughts About Design And Art - Vanseo Design Design is not art. While they share some similarities the two are not the same. Designers solve problems and artists express themselves. Note: This post includes an audio version. Every so often I see someone mention that design isn’t art, but there’s something more in the mention. I don’t agree with this attitude and think it equally wrong and quite honestly a bad message to be sending. Today I want to talk about design and art. Design is not Art Design and art have a different purpose. Designers can increase their value the more they know and understand art Art on the other hand is its own end. Design and art have a different process to creation. Art has no constraints initially and ultimately only those constraints imposed by the artist or the work itself. Both art and design are observed and judged differently. Design is judged on utility and function. Art and design have different audiences. Art is experience driven. Design is Similar to Art Art is Found Everywhere Including Design

Looking At Art Search Jeff Koons, (Sandwiches), 2000. Oil on canvas, 9 feet 10 inches x 14 feet 2 inches (299.7 x 431.8 cm). Solomon R. Guggenheim Museum, New York Commissioned by Deutsche Bank AG in consultation with the Solomon R. Guggenheim Foundation for the Deutsche Guggenheim, Berlin, 2006 2006.8. © Jeff Koons In Preparation Make sure students have paper and pencil. Questions for Investigation What do you see? Artwork Essay Jeff Koons rose to prominence in the mid-1980s as part of a generation of artists who explored the meaning of art in a media-saturated era and a perceived crisis of representation. For the series This work, along with others in Easyfun-Ethereal, is part of Koons's new brand of Pop painting, recalling in particular the advertising iconography and billboard-style painting technique present in James Rosenquist's canvases.

Cerddoriaeth Jean-Michel Basquiat Biography, Art, and Analysis of Works | The Art Story Synopsis Jean-Michel Basquiat emerged from the "Punk" scene in New York as a gritty, street-smart graffiti artist who successfully crossed over from his "downtown" origins to the international art gallery circuit. In a few fast-paced years, Basquiat swiftly rose to become one of the most celebrated, and possibly most commercially exploited American "naif" painters of the widely celebrated Neo-Expressionism art movement. Key Ideas Basquiat's work is one of the few examples of how an early 1980s American Punk, or graffiti-based and counter-cultural practice could become a fully recognized, critically embraced and popularly celebrated artistic phenomenon, indeed not unlike the rise of American Hip Hop during the same era. Basquiat's work is an example of how American artists of the 1980s could reintroduce the human figure in their work after the wide success of Minimalism and Conceptualism, thus establishing a dialogue with the more distant tradition of 1950s Abstract Expressionism. Biography

A "Psychological" Optical Illusion A "Psychological" Optical Illusion: The influence of culture and environment can have an effect on our visual perception. This theory was first explored by Robert Laws, a Scottish missionary working in Malawi, Africa, during the late 1800's. So What Did You See? You Can Find More Unusual Optical Illusions In The "Just For Fun" Section Here. Symudiadau Celf Jenny Holzer Jenny Holzer was born in 1950 in Gallipolis, Ohio. She received a BFA in printmaking and painting from Ohio University, Athens, in 1972, and in 1975 she entered the MFA painting program at the Rhode Island School of Design in Providence. While there, she began to introduce language into her work. Holzer moved to New York after earning her degree at RISD in 1977 and enrolled in the Independent Study Program at the Whitney Museum of American Art, New York. That year, she created her first all-text works, the Truisms series, printing them on paper, which she pasted up anonymously around the city. Holzer has been the recipient of several important awards, including the Blair Award, presented by the Art Institute of Chicago in 1982, and the Leone d’Oro award for best pavilion at the Venice Biennale in 1990.