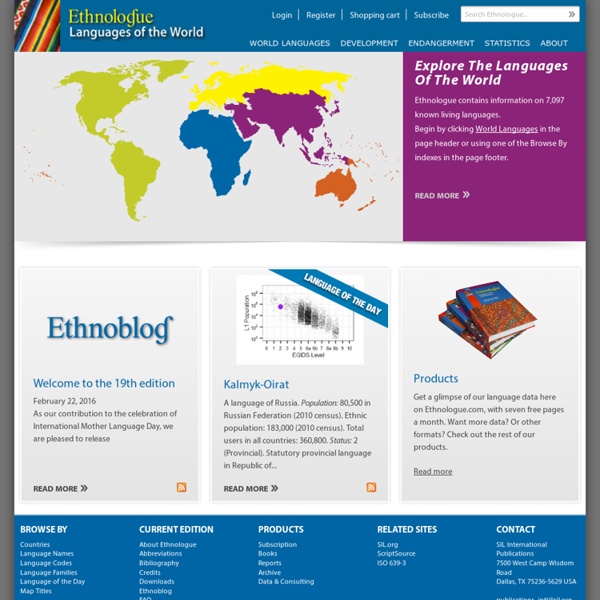 Extinct language An extinct language is a language that no longer has any speakers,[1] or that is no longer in current use. Extinct languages are sometimes contrasted with dead languages, which are still known and used in special contexts in written form, but not as ordinary spoken languages for everyday communication. However, language extinction and language death are often equated. Language loss[edit]

About this site - Notes from a Linguistic Mystic This site exists both as a place for me to post the things that intrigue me and make me think, but also as a place for you to find and learn about things that might intrigue you. I’ll do my best to write in such a way that you don’t need a background in Linguistics to understand my posts, and always feel free to comment if you don’t understand something. I’ll post a clarification as soon as I can.

100 (Free) Ways To Learn to Speak Another Language 100 Resources To Learn to Speak Another Language by TeachThought Staff Ed note: This post was first published in 2012, and is in the process of being updated. If you have any updates or corrections, please let us know in the comments. Learning another language is among the many things that have been made easier with the explosion of the digital universe. While some of the resources aren’t incredible (simply using Google Translate), and some of the languages fairly obscure (Welsh), the list is impressive if for no other reason than to demonstrate how much is actually out there if you do a little digging.

Pinker Outline I. Linguistics: The Science of Language A. The World Factbook People from nearly every country share information with CIA, and new individuals contact us daily. If you have information you think might interest CIA due to our foreign intelligence collection mission, there are many ways to reach us. If you know of an imminent threat to a location inside the U.S., immediately contact your local law enforcement or FBI Field Office. For threats outside the U.S., contact CIA or go to a U.S. Embassy or Consulate and ask for the information to be passed to a U.S. official. Please know, CIA does not engage in law enforcement.

Lists of endangered languages In order to be listed, a language must be classified as "endangered" in an academic source quoted. SIL Ethnologue (2005) lists 473 out of 6,909 living languages inventorized (6.8%) as "nearly extinct", indicating cases where "only a few elderly speakers are still living"; this figure dropped to 6.1% as of 2013.[1] In order to judge if a language is endangered, the number of speakers is less important than the age distribution; There are languages in Indonesia reported with as many as two million native speakers alive now, but all of advancing age, with little or no transmission to the young. On the other hand, while there are 30,000 Ladin speakers left, almost all children still learn it as their mother tongue, thus Ladin is not endangered in the 21st century. UNESCO distinguishes four levels of endangerment in languages, based on intergenerational transfer:[2] Vulnerable

Sir Ken Robinson Opening Keynote #ASTD2013 @sirkenrobinson These are my live blogged notes from the opening session at the ASTD International Conference & Expo (ICE) -- happening this week in Dallas, TX. 10,000 or so training and development people here to extend their practice. We all have deep talents, but it’s often the case that we don’t discover them. Human talent are like the world’s natural resources – they are often buried beneath the surface.

Our Guide to French Internet & Text Slang What do kids say these days? The digital culture keeps French learners just as confused as our grandparents when it comes to the newest expressions à la mode. The good thing is that once you master a few texting codes, you’ll be able to communicate in written French on a daily basis. Sometimes, texting can be so much easier than talking face-to-face! Table of Contents 1. Bubble vocabulary: the best way to expand your vocabulary is to use the words you don’t quite know. Illustration by Lisa Larson-Walker A little while back, I was chatting with a friend when he described a situation as “execrable.” He pronounced it “ex-EH-crable.” I’d always thought it was “EX-ecrable.” But execrable is a word I’d mostly just read in books, had rarely heard spoken, and had never once, in my whole life, uttered aloud—in large part because I wasn’t exactly sure how to say it, and because the nuances of its definition (beyond “bad”) escaped me. Since we have a trusting, forthright relationship, I decided to broach the topic.

Chartres: Cathedral of Notre-Dame - Image Collection Chartres Cathedral is among the best preserved of the major French cathedrals, with extensive programmes of sculpture and stained glass. It was a major site of pilgrimage in honour of the Virgin Mary, to whom the cathedral is dedicated. This website provides access to a comprehensive collection of images and detailed descriptions of Chartres Cathedral.

Interactive and illustrative maps of world languages identifying the relationships between various classifications of languages spoken throughout the world. by nda_librarian May 7