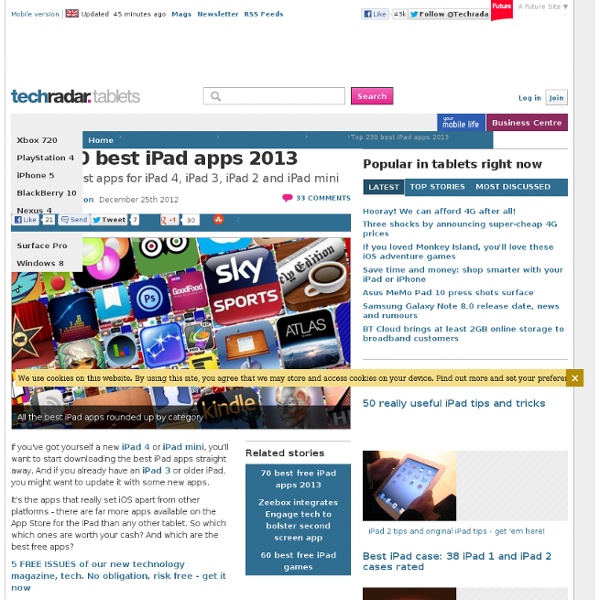 If you've got yourself an iPad Air or new iPad mini, you'll want to start downloading the best iPad apps straight away. And if you already have an iPad 4 or older iPad, you might want to update it with some new apps. It's the apps that really set iOS apart from other platforms - there are far more apps available on the App Store for the iPad than any other tablet. So which which ones are worth your cash? And which are the best free apps? Luckily for you we've tested thousands of the best iPad apps so that you don't have to. So read on for our best-in-class apps for each major category, followed by some more specific lists of the best free and paid for apps and games. Best iPad apps: Books App name: KindleDeveloper: AmazonPrice: FreeLink: Get from iTunes The best library of literature to choose from, cross platform support via Whispersync, a great choice of fonts and ways to read… Kindle is the most comprehensive reading app out there, and an essential download. Best iPad apps: Business

Google Apps for iPad Productivity Tips To increase efficiency, it helps to add any commonly-accessed websites, such as the Google eBookstore or Google Docs, to the home screen as a bookmark. This allows the shortcut to show up as an app icon, taking users directly where they need to go. iPod It’s hard to describe to people all of the magic that happens at Anastasis on a daily basis. It really does feel like something special, a magical quality of falling down the rabbit hole into another world where school is fun and challenging and wonderful. The learning that happens here is very organic, it lacks a formulaic approach. So when people ask us how they can do what we do, it isn’t a simple answer.

Drawing on the iPad See how these 12 compare to other styluses: Check out our in-depth iOS stylus charts. Steve Jobs may hate the idea of using a stylus on his touchscreen devices, but the fact remains that some consumers simply prefer an intermediary accessory for interaction. Whether it’s too cold outside for direct contact, you’re worried about touchscreen germs, or you need a sketching tool, sometimes a stylus can be a good thing. Accessory manufacturers seem to agree, having produced a plethora of styluses for Apple’s iOS devices.

Teaching Large Classes with an iPad » To this day I remain a big fan of the overhead projector. I truly believe it was more effective a tool for teaching than the projected Powerpoint slides will ever be. I stood facing the students, watching their expressions, which I could see since the lights were sufficiently bright. Turn the iPad® into a Knowledge Creation resource Buy Now Free Trials Products & Services Inspiration (Mac/Windows) Inspiration Maps (iPad/iPhone) Kidspiration (Mac/Windows) Thoughts on the iPad2 in Teaching By Shelly Blake-Plock Picked up my own iPad2 about three weeks ago and, as an experiment, I have set my laptop aside and have used nothing but the Apple in the classroom ever since. And I have found that there is nothing that I do in my normal activities as a teacher that I have done with a laptop or a tablet PC that I can not do with the iPad2.

The 10 Comandments of iPad Tablets We all have probably heard the story of Moses, bringing down the 10 commandments on two stone tablets from Mount Sinai, but there are also commandments that apply to our iPad tablets. Here are the top 10. 1. Collaborative Whiteboard Apps for the Classroom Interactive and collaborative - Whiteboards are a great way for teachers to explain concepts to their students. With the ability of some iPad apps to record, you ensure that students who did not develop understanding of the concept the first time have the opportunity to watch and listen again and again. Working in small groups or brainstorming as a class, collaborative whiteboards are a great way to share ideas. Work in the same room, on the same network or even from different parts of the country.