USB & Firewire. USB (1.x, 2.0 and the significantly different (but compatible) 3.0)and FireWire (IEEE 1394a and b) were adopted for serial communications because they reduce PC connection size/costs and improve performance. 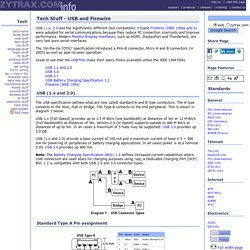 Modern Monitor/Display interfaces, such as HDMI, DisplayPort and Thunderbolt, are very fast pure serial interfaces. The 'On-the-Go (OTG)' specification introduced a Mini-B connector, Micro A and B connectors (in 2007) as well as peer-to-peer operation. Great to see that the USB folk make their specs freely available unlike the IEEE 1394 folks. USB (1.x and 2.0) The USB specification defines what are now called standard A and B type connectors. USB 1.x (Full-Speed) provides up to 1.5 M Bit/s (low-bandwidth) at distances of 3m or 12 M Bit/s (Full-Bandwidth) at distances of 5m. USB (1.x and 2.0) provide a base current of 100 mA and a maximum current of base X 5 = 500 mA for powering of peripherals or battery charging applications.

PowerGuru - Power Electronics Information Portal. The Push for USB OTG The beauty is to charge a battery per the latest USB Battery Charging Specs, using a high efficiency buck topology converter that utilizes a chip inductor for minimized space and cost, but can then run the buck controller in reverse as an effective boost controller requiring no additional components. 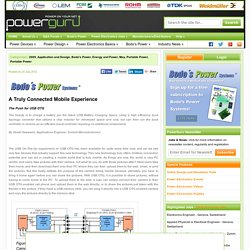 By Shadi Hawawini, Applications Engineer, Summit Microelectronics The USB On-The-Go supplement, or USB OTG has been available for quite some time now, and yet we see very few devices that actually support this new technology. This new technology truly offers limitless connection potential and can aid in creating a mobile world that is truly mobile. As things are now, the world is very PC centric; end users take pictures with their camera, but what do you do with those pictures after?

Distinguishing the host and peripheral device For a male A-connector, the ID pin is connected to GND, whereas for the male B connector, the pin is left floating. Host Negotiation Protocol. Why does micro USB 2.0 have 5 pins, when the A-type only has 4? - Electrical Engineering Stack Exchange. OTG & charging cable build - Micro-B USB. Quote: Originally Posted by flez1966 How did you work out which is pin 6? 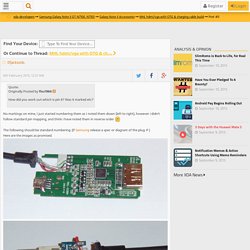 Was it marked etc? No markings on mine, I just started numbering them as I noted them down (left to right), however i didn't follow standard pin mapping, and think i have noted them in reverse order The following should be standard numbering. Modify a cheap USB charger to feed an iPod, iPhone or Samsung Galaxy. Charging an iPad, iPhone, or iPod. I needed to charge an iPad, but I couldn’t do it the “normal” way because it was stuck in a wall! 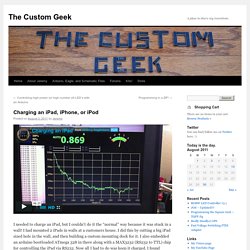 I had mounted 2 iPads in walls at a customers house. I did this by cutting a big iPad sized hole in the wall, and then building a custom mounting dock for it. I also embedded an arduino bootloaded ATmega 328 in there along with a MAX3232 (RS232 to TTL) chip for controlling the iPad via RS232. Now all I had to do was keep it charged. I found Ladyada’s mintyboost resources a huge help. On a side note, you may ask yourself why would anyone put an iPad in a wall? Why not just use the stock iPad charger? Keep in mind that an iPad charger will charge an iPhone, but an iPhone charger will not charge an iPad. Here is a shot of the end result. Here is the schematic: Make an iPhone Altoids Smalls USB Charger. How to make a portable USB charger. Make Your Own USB-Y Cable.