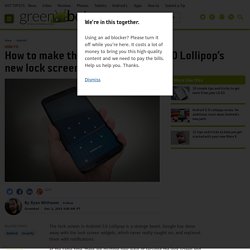 Google has done away with the lock screen widgets, which never really caught on, and replaced them with notifications. At the same time, there are multiple new ways of securing the lock screen and keeping your personal data private. The options to do all this are scattered throughout the settings, because Google apparently likes to keep us on our toes. [觀點] 不是不換手機，因為LINE聊天記錄讓我換不了. How to backup and restore Naver LINE chat history on Android without rooting. LINE is a free instant messaging app for smartphones and PCs with over 200 million users worldwide. 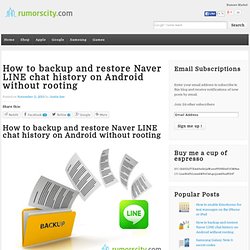 As a LINE messenger user, you may want to backup and restore your LINE chat history, be it switching to a new device or just as a backup in case the data is deleted accidentally. It may seem an impossible task to restore the data and the latest LINE update makes matter even worse, where the history is deleted automatically when there is a login detected on another device, which means the data would be lost forever if there is no prior backup performed. Essential Guide to Managing Google Contacts.

Along with all of the collective Google apps, Contacts has proven to be a very dynamic address book system. 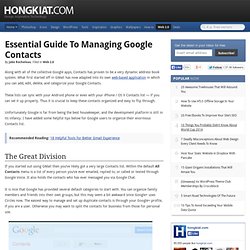 What first started off in GMail has now adapted into its own web-based application in which you can add, edit, delete, and categorize your Google Contacts. These lists can sync with your Android phone or even with your iPhone / OS X Contacts list — if you can set it up properly. Thus it is crucial to keep these contacts organized and easy to flip through. Unfortunately Google is far from being the best housekeeper, and the development platform is still in its infancy. I have added some helpful tips below for Google users to organize their enormous Contacts list. Recommended Reading: 18 Helpful Tools for Better Gmail Experience The Great Division If you started out using GMail then you’ve likely got a very large Contacts list. The Essential Guide to Going Mobile for Nonprofits. “Going mobile” is a phrase I’m sure you’ve heard tossed around quite a bit. 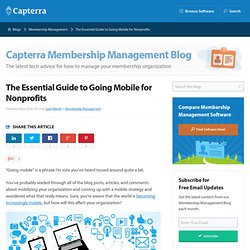 You’ve probably waded through all of the blog posts, articles, and comments about mobilizing your organization and coming up with a mobile strategy and wondered what that really means. Sure, you’re aware that the world is becoming increasingly mobile, but how will this affect your organization? Easiest Way Of Naver LINE Chat History Backup And Restore For Android.

Some time back Techgravy blog shared the method how to Naver LINE chat history and restore for Android and iPhone. 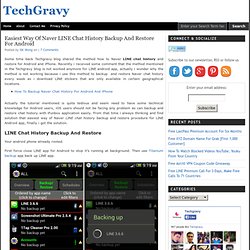 Recently i received some comment that the method mentioned in the Techgravy blog is not worked anymore for LINE android app, actually i wonder why the method is not working because i use this method to backup and restore Naver chat history every week as i download LINE stickers that are only available in certain geographical locations. How To Backup Naver Chat History For Android And iPhone Actually the tutorial mentioned is quite tedious and seem need to have some technical knowledge for Android users, iOS users should not be facing any problem as can backup and restore chat history with iFunbox application easily. From that time i always thinking and find solution that easiest way of Naver LINE chat history backup and restore procedure for LINE Android app, finally i got the solution. 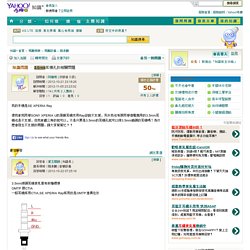 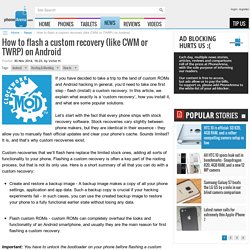 Pertino - set up VPN network in your portable device. Pertino has expanded its cloud-based networking platform since we reviewed the service at its launch. 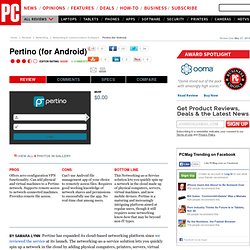 The networking-as-a-service solution lets you quickly spin up a network in the cloud by adding physical computers, printers, servers, virtual machines, and now mobile devices. Anything that's connected to the Internet, you can virtually network and share via the cloud, no matter where you, the devices, or the people you want to share them with are located. Pertino for Android (free), which is still in beta, extends a Pertino network to your Android device. This review covers the Android app, but an iOS version is also available. Pertino is a maturing and increasingly intriguing platform, though it still requires some networking know-how. Android InstallI downloaded the app from Google Play. How to install Floating Windows (Multi-Window Feature) On Any Android Device. Quick Tip: Reset Android default apps.

One of the questions I get a lot is how to reset default apps in the Android platform. 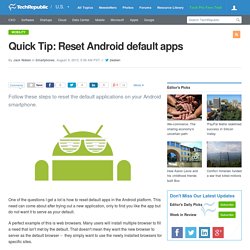 This need can come about after trying out a new application, only to find you like the app but do not want it to serve as your default. A perfect example of this is web browsers. Many users will install multiple browser to fill a need that isn't met by the default. That doesn't mean they want the new browser to server as the default browser -- they simply want to use the newly installed browsers for specific sites. However, what happens when you install that new browser and accidentally accept it as the default, pressing Always instead of Just once (Figure A)? 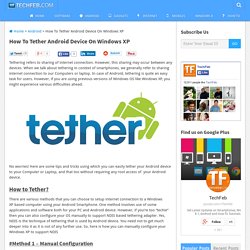 However, this sharing may occur between any devices. When we talk about tethering in context of smartphones, we generally refer to sharing internet connection to our Computers or laptop. How To Install Floating windows feature on Any Android Device. Android Developers on Xda forum recently ported Halo and X floating windows Mod for all android devices which was extracted from the famous android rom ‘Paranoid Android ROM’. We’ recently installed this mod on Our Google nexus 10, Nexus4 and Htc One and it works flawlessly! So This app has been tested on both, Android Smartphones as well as Android Tablets. Also note that you shouldn’t install this mod on any samsung devices as it will create conflict between samsung’s multi window framework.

Make sure you backup everything before you proceed! Note : ROOT ACCESS REQUIRED! Tips - use G button as camera button / lock … I found it in a chinese forum (bbs.gfan.com/android-2014369-1-1.html) I'm sure most people found the G button useless, so it would be nice to change that. The following is my experience with it: The position of the G button make it perfectly useful as lock/unlock button, you can use it to shutdown as well, but cannot use it to switch on the phone, I guess it is electrically hardwired to the power button at the top.

Not too bad for camera, long press it will launch the camera app, but it don't have 2 levels so press it once and it will start auto-focus and take picture immediately, similar to touch and release shutter button in camera app, which mean you can't "dis-engage" a failed focus attempt. TWM X2 root - TWM 手機討論區 - Android 台灣中文網. TWM Amazing X2 CWM recovery :... - Taiwan101 ROM Factory.