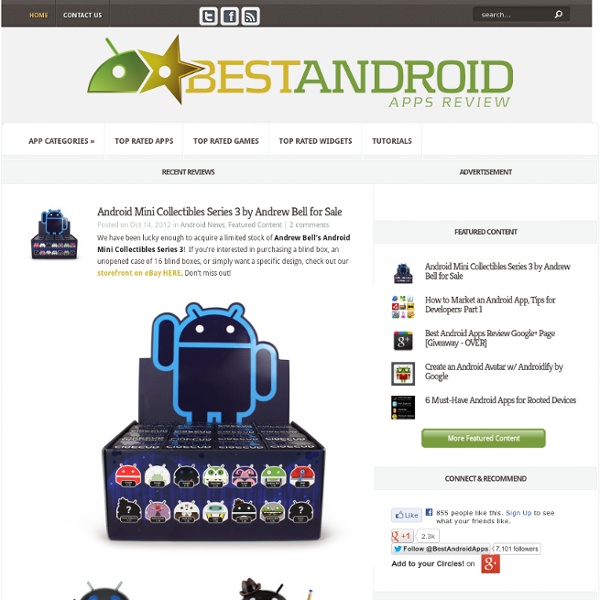 achartengine - Charting library for Android AChartEngine is a charting library for Android applications. It currently supports the following chart types: line chart area chart scatter chart time chart bar chart pie chart bubble chart doughnut chart range (high-low) bar chart dial chart / gauge combined (any combination of line, cubic line, scatter, bar, range bar, bubble) chart cubic line chart All the above supported chart types can contain multiple series, can be displayed with the X axis horizontally (default) or vertically and support many other custom features. The charts can be built as a view that can be added to a view group or as an intent, such as it can be used to start an activity.

Crystal v2.2 for CM7 ThemeChooser: now on market! (Update 10/17/2011) CM7 Crystal Theme by DaRk_dOg Quote List of open source Android applications This is an incomplete list of notable applications (apps) that run on the Android platform which meet guidelines for free software and open-source software. For a more extensive list of apps, see the External links section below. Communication[edit]

Android Freeware: Best and Free Software for Android mobile platform Categories Communications (216)Entertainment (256)Finance (63)Games (176)Health (92)Multimedia (117)News (37)Productivity (230)Reference (146)Shopping (61)Sports (58)System (160)Travel (104) Browse » Android Apps» Android Devices Contribute + Submit App+ Submit Device How to Develop Android Apps Online Course Lesson 1: Create Project Sunshine with a Simple UI (5-8 hrs) Start by installing Android Studio, you’ll create your first project with a simple list-based user interface. You'll then build and deploy it to virtual and actual devices. (ROM) htc sense look alike 2.2 on blade rom r2 - Android @ MoDaCo ok so have compiled a sense ui look a like/themed rom based on 2.2 with .32 kernal (from chinese dump) it is alpha and some features are missing to make it a propper sense ui themed rom see release map below.the rom is based on a mix between g formums and fibblesans rom. it includes all of the apps that fibble included (and apps ive added and deleted stock launcher) why? because fibble is a long time poster and probably knows best what apps people want installed! i will do a lite release with only stock apps (plus my apps for the ui mod) it'll be a bit faster and around 70-75 mb

Top 25 Android apps: The best of the best The Android Market may not have as many apps as the iPhone App Store yet, but there are still enough to be overwhelmed, and it's growing at a breakneck pace. To help you sort through them all, here's my list of the best apps I've found on Android. Again, remember that this is a snapshot in time. The Android platform is developing so quickly right now that I guarantee my home screen look different a month from now. The best way to view my list of the top Android apps is in the screenshot gallery. However, you can also view my top 25 in the list below.

Introducing the HTC Desire The Desire is HTC's latest Android offering, which they themselves have modestly dubbed a "SuperPhone" rather than a regular "SmartPhone", and even after only a few hours with the device I have to say it is worthy of the title. Running the latest version of the Android operating system (version 2.1, or "Eclair"), the Desire packs a number of new features over older HTC Android models including an updated Exchange email client, support for Bluetooth file transfer, support for VPN connections, Version 3.1 of the WebKit browser as well as HTC's new "Friend Stream" social networking client. I will look at all of these features in more detail. HTC's own marketing blurb summarises the key features of the Desire as follows:

How to Post on Social Media to Gain Popularity Social media is a mysterious and multifaceted beast. Much like the Internet, the social media landscape evolves at a dizzying pace, making it very difficult indeed to keep up with the numerous changes and new platforms that crop up left, right and center. Especially if you aren’t a social media strategist by trade, and you’re simply trying to navigate the murky waters of digital marketing to, say, promote your personal blog posts or make sure your Facebook status gets seen by as many eyeballs as possible.

31/Jan r9: de-orangeated ROM for ZTE Blade / Orange San Francisco [eclair] [OLED+TFT] About RELEASE This ROM is based on the Orange V1.0.0B08 ROM shipped with current device, all the Orange Branding has been removed, and any applications modified by Orange have been replaced with the AOSP versions. The aim is to revert the device to as close to AOSP as possible. The 22 Best Android Apps - PCWorld Here are the top productivity tools, utilities, and games for smartphones based on Google's Android OS. If you're looking for multiplatform apps or titles exclusive to BlackBerry or iPhone, turn to the other articles in this package. Productivity Tools Check your head: In the Thinking Space "mind-mapping" app, you can create maps to connect thoughts and ideas.