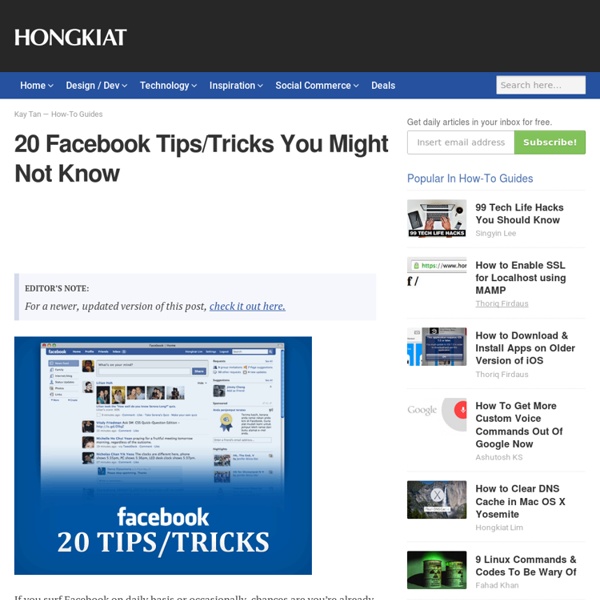 Tech Tips for Webmasters , Designers and Bloggers 25 Best Text Effects Tutorials in Photoshop If you want to add a few 3D effects on text in images, then you could use some help from this article which lists 25 best text effects tutorials. Whether it is poster designing or simple image captioning, good text effects are bound to attract audience and make the visitors stick around for a lit... 21 Mind Blowing Photoshop Tutorials You would need a list of mind blowing Photoshop tutorials if you want to be called anything near proficient in Photoshop. How to Create a CSS3 Dropdown Menu [Tutorial] Topic: CSS3Difficulty: BeginnerEstimated Completion Time: 20 mins In this tutorial we will code in pure CSS3 the Navigation Menu that you can find in Impressionist UI by Vladimir Kudinov. Step 1 – HTML Markup We will create an unordered list with a list item and an anchor tag for each menu link.

How to Create an Video Player in jQuery, HTML5 & CSS3 [Tutorial] Topic: jQuery / CSS3Difficulty: Intermediate / AdvancedEstimated Completion Time: 45 mins In this tutorial we will code an Video Player from Impressionist UI by Vladimir Kudinov. We will code it with CSS3 for the styling and the “MediaElement.js” for the functionality. This is Your Brain on CSS First things first: the CSS 3D renderer used to power this the previous site is now available on GitHub.com. However, it's still limited to only solid lines and planes. It's also limited to WebKit browsers, as Firefox's CSS 3D support just isn't quite there yet. But CSS 3D is not a one trick pony, and as with many things, what you get out of it depends entirely on what you put in. So here's a disembodied head made out of CSS 3D. It consists of nothing more than a bunch of images stacked up against each other, and integrates perfectly with the existing 3D parallax on this site.

Make Your Mockup in Markup We aren’t designing copies of web pages, we’re designing web pages. Andy Clarke, via Quotes on Design The old way Celebrating 10 Years of Small Business Success Bands and DJs can leave computer programming to the experts when it comes to developing their own mobile app. Now with App.biz, they can spend more time focusing on their music and quickly create a personalized mobile application to connect with their fans. App.biz makes it possible for artists to easily sell their songs via iTunes, stream videos, podcasts and music, and promote their upcoming performance schedules. The company offers a free product version to startup musicians as well as customized services for famous clients such as LinkinPark, Metallica, Lady Gaga and Eminem. App.biz is routinely featured in leading media publications such as Business Insider, The New York Times, TechCrunch, VentureBeat, The Wall Street Journal, Mashable and more. While the company is based out of San Francisco, their .biz website enables them to reach thousands artists around the world every day.

Cybersecurity Stocks: The Names To Consider Now Earlier this month, Americans were alarmed to learn that hackers had stolen nearly 1.5 million credit card numbers from Global Payments ( GPN ), an Atlanta, Georgia-based payment processor and former Visa ( V ) partner. Such stories have appeared in the news with increasing frequency, and it’s not just large corporations being targeted by cyber criminals. In fact, small organizations , such as physicians' offices, saw the greatest number of data breaches last year. In a separate investigation, Verizon's ( VZ ) annual Data Break Investigations Report examined 855 account breaches from around the globe and found that criminals compromised 174 million records in 2011. For investors, these stories point to an obvious trend: Cybersecurity stocks, already hot, are likely to continue gaining heat.