5 Apps for Creating Interactive Books and ePubs on your iPad 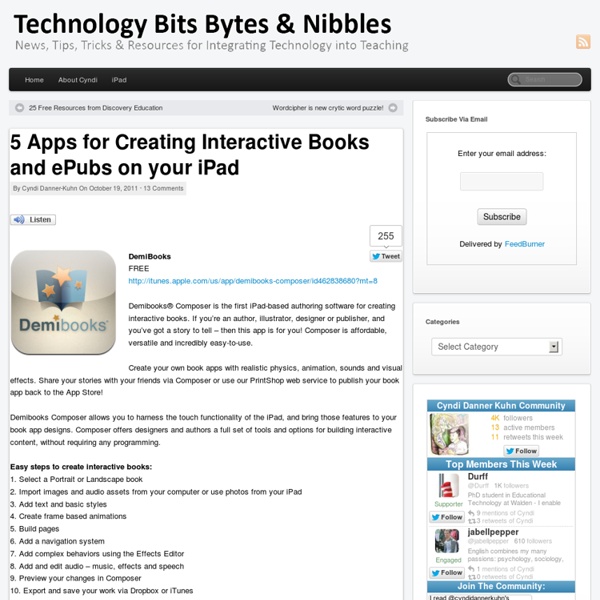 Google Apps for iPad Productivity Tips To increase efficiency, it helps to add any commonly-accessed websites, such as the Google eBookstore or Google Docs, to the home screen as a bookmark. This allows the shortcut to show up as an app icon, taking users directly where they need to go. To do this, tap the share button at the top of the screen and choose Add to Home Screen. In addition, many third-party apps and software are available to maximize productivity and make tasks simpler for you and your students. Some include:

Preposition Builder Preposition Builder, by Mobile Education Store, is another feather in Kyle Tomson’s hat! This dedicated dad has been developing solid speech & language apps for quite some time and Preposition Builder moved him into the mainstream. This app is a wonderful learning tool for all kids at some point in their development. 20 Great Classroom iPad Apps to add to your Collection (1-5) Over the last year and a half I have really enjoyed exploring the types of iPad apps that can be used in the classroom and so I thought I would begin to draw together some of my favourites and share them with you here. This is the first of 4 posts in which I feature my first 5 recommendations: Hairy Letters A great app for early years classes – understanding letter shapes and sounds. Good to see a phonics app using fonts / sounds used in UK.

Best iPad Apps of 2011 It’s been another great year for the iPad, and for iPad apps. There are now over 170,000 iPad apps available in the App Store (as at 12/21/11). And as Apple’s TV ads for the iPad so nicely illustrate, there are now iPad apps for just about anything you care to do with your favorite tablet device. Top 200 best iPad apps 2012 If you've got yourself an iPad Air or new iPad mini, you'll want to start downloading the best iPad apps straight away. And if you already have an iPad 4 or older iPad, you might want to update it with some new apps. It's the apps that really set iOS apart from other platforms - there are far more apps available on the App Store for the iPad than any other tablet.

Educreations: DIY Whiteboard Video Tutorials on the iPad The new app from Educreations is available in the Apple App Store today (iTunes link). The app is designed to make it easy to create, narrate, and record whiteboard video tutorials on the iPad and to share them with others. A Web version of the startup's whiteboard app has been available for some time now, but it's the native app for an iPad that makes this sort of tool make sense -- it's so much easier to write on a whiteboard with the finger than it is with a mouse, if nothing else. Educreations is hardly the only app like this available for the iPad (I covered the very similar app ShowMe over on MindShift this summer, for example). But while Educreations' iPad app might be late to the whiteboard app market, its entry is a solid one.

The Ultimate Guide To Using iPads In The Classroom How Students Benefit From Using Social Media 14.60K Views 0 Likes A lot of criticism has been leveled at social media and the effect it has on the way students process and retain information, as well as how distracting it can be. However, social media offers plenty of opportunities for learning and interactivity, and if you take a moment to think about it, it's not too hard to see how students benefit from using social media. 100 Web 2.0 Tools Every Teacher Should Know About 10 Apps For Inquiry Learning This post will show 10 apps or ways that iPads and iPods become powerful learning tools in an inquiry-based learning environment, tied to sound research by a leading education network, the Galileo Network. They offer up a rubric to determine how well a lesson aligns with the inquiry learning process. According to the rubric, there are 8 dimensions of inquiry: AuthenticityAcademic RigorAssessmentBeyond the SchoolUse of Digital TechnologiesActive ExplorationConnecting with ExpertsElaborated Communication The iPad can easily support any of these dimensions, and I want to share 1o ways that it might do it best.

Turn the iPad® into a Knowledge Creation resource Buy Now Free Trials Products & Services Inspiration (Mac/Windows) Inspiration Maps (iPad/iPhone) The iPad as RTI Intervention Toolkit While waiting for the iPad to arrive in my reading intervention classroom, I’ve had a lot of time to think and plan how I will use the device. Ground Rules I don’t want hundreds of apps. I’m looking for a few favorites. I don’t want more drill and kill. Literacy Journal: Only 1 iPad in the Classroom? [for additional ELA/Reading specific apps and ideas see Reading on the iPad] Is only one iPad in a classroom worth it? This question keeps reappearing on the EC Ning and in other blog spaces. The answer is easy: YES, especially if the teacher has access to a Mac desktop or (preferably) laptop and a wifi network in the classroom. It is an even larger YES if the Mac device has the most current operating system. Having a computer to which the iPad can sync is not absolutely necessary, but it is a Best Idea.

100 Incredibly Useful & Free iPad Apps If you just dropped a few hundred dollars on an iPad, you might not have much left in your budget to fill it up with apps. Fortunately, app developers have already stepped up and created a huge collection of completely free iPad apps. Below you’ll find over 100 free iPad apps to help you get started. Many of them are only free for a limited time as an introductory special so you’d better grab them fast! If you like this roundup, it’s definitely worth taking a look at our all-new roundup of The Top 100 iPad Apps, in addition to our collections of 100 free iPhone apps, and 100 free Mac apps, both of which contain some brilliant software that doesn’t cost a dime!

Psychology Tutorials and Demonstrations Keep up-to-date on these tutorials. This is a page that will contain links to hypertext tutorials in psychology as they become available. Currently there are links to tutorials in: Index What's New What's New Integrate Dropbox with Pages, Keynote, and Numbers on iPad and iPhone — techinch The iWork apps are some of the best apps on iPad, and each show just how powerful a touchscreen device can be with the most basic of computing functions: creating and editing documents, spreadsheets, and presentations. They each work quite well with their respective Microsoft Office counterparts also. And, the latest updates turned each of the iWork apps into universal apps, so you can use the full apps on your iPhone, iPod Touch, and iPad. In fact, there’s not much to dislike about the iWork apps. Except for one thing: importing and exporting files. You can open documents from email attachments, download them from websites, or import them from other apps like Dropbox.