Motion Sensors. The Android platform provides several sensors that let you monitor the motion of a device. 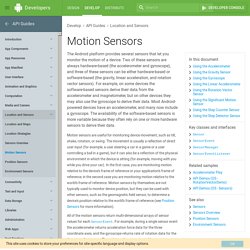 Two of these sensors are always hardware-based (the accelerometer and gyroscope), and three of these sensors can be either hardware-based or software-based (the gravity, linear acceleration, and rotation vector sensors). For example, on some devices the software-based sensors derive their data from the accelerometer and magnetometer, but on other devices they may also use the gyroscope to derive their data.

Most Android-powered devices have an accelerometer, and many now include a gyroscope. The availability of the software-based sensors is more variable because they often rely on one or more hardware sensors to derive their data. Motion sensors are useful for monitoring device movement, such as tilt, shake, rotation, or swing. All of the motion sensors return multi-dimensional arrays of sensor values for each SensorEvent. Table 1. 1 The scalar component is an optional value. Ad = - ∑Fs / mass. Sensor in Smartphone. Posted in - Mobile App Date - 29 Jun. 2015 Sensors have become an integral part of the Android ecosystem for measuring device orientation, motion, and various environmental conditions. 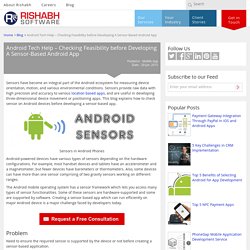 Sensors provide raw data with high precision and accuracy to various location based apps, and are useful in developing three-dimensional device movement or positioning apps. This blog explains how to check sensor on Android devices before developing a sensor-based app. Sensors in Android Phones Android-powered devices have various types of sensors depending on the hardware configurations. The Android mobile operating system has a sensor framework which lets you access many types of sensor functionalities. Problem. Android Sensor Tutorial. Did you know how many different kinds of sensors go inside a smartphone? Today's smartphones are incredible little machines – ones that would have been regarded as witchcraft several decades ago. 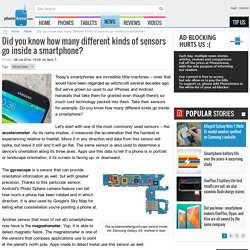 But we've grown so used to our iPhones and Android handsets that take them for granted even though there's so much cool technology packed into them. Take their sensors for example. Do you know how many different kinds go inside a smartphone? Let's start with one of the most commonly used sensors – the accelerometer. As its name implies, it measures the acceleration that the handset is experiencing relative to freefall. The gyroscope is a sensor that can provide orientation information as well, but with greater precision. Another sensor that most (if not all) smartphones now have is the magnetometer. Next up we have the proximity sensor, which is comprised of an infrared LED and an IR light detector. A phone's light sensor is what measures how bright the ambient light is. Higher-end phones have a built-in barometer – a sensor that can measure atmospheric pressure.

Android Open Source Project. Sensor axis definition Sensor event values from many sensors are expressed in a specific frame that is static relative to the phone. 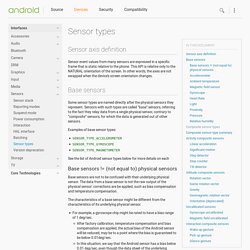 This API is relative only to the NATURAL orientation of the screen. In other words, the axes are not swapped when the device's screen orientation changes. Figure 1. Coordinate system (relative to a device) that's used by the Sensor API. List all sensors available on an Android device. Location and Sensors APIs. Using Android Sensors in Your Application. Monitoring applications are gaining in popularity, from parents wanting to track their children’s location and online activity to spouses and employers wishing to monitor their respective spouses and employees. 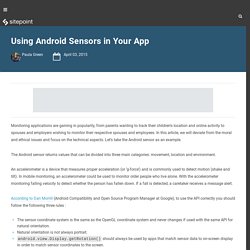 In this article, we will deviate from the moral and ethical issues and focus on the technical aspects. Let’s take the Android sensor as an example. The Android sensor returns values that can be divided into three main categories: movement, location and environment. An accelerometer is a device that measures proper acceleration (or ‘g-force’) and is commonly used to detect motion (shake and tilt). In mobile monitoring, an accelerometer could be used to monitor older people who live alone. According to Dan Morrill (Android Compatibility and Open Source Program Manager at Google), to use the API correctly you should follow the following three rules : We’ll use SensorEventListener to receive notifications from the SensorManager when sensor values change. OPPO Introduces SmartSensor: A Small, Fast, And Precise Sensor-Based OIS Technology. OPPO might have just blown everyone's mind with its Super VOOC fast charging technology, but that doesn't mean that the company's MWC announcements are over. 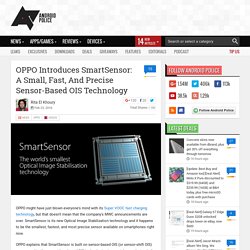 SmartSensor is its new Optical Image Stabilization technology and it happens to be the smallest, fastest, and most precise sensor available on smartphones right now. OPPO explains that SmartSensor is built on sensor-based OIS (or sensor-shift OIS) as opposed to the current lens-based OIS technologies in smartphones. Instead of using a motor to shift the lens around to compensate for movement, it keeps the lens stable but moves the sensor to counter the motion. It's also as thin as two sheets of paper, overcoming the size limitation when being implemented in modern smartphones. The advantages of this sensor-based technology are multiple. This all results in smoother and clearer photos, or at least that's OPPO's claim.