All things iPod, iPhone, iPad and Beyond 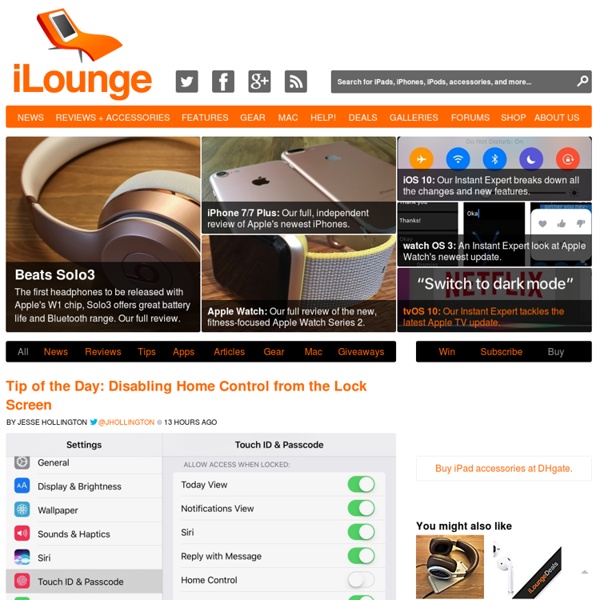 iLounge Game Spotlight: Hitman GO The Hitman game series has proven popular enough to spawn a number of sequels, as well as a feature film. And with the release of Hitman GO ($5), it’s clear Square Enix thinks the franchise still has legs, as Agent 47 makes a big move from stealth action/adventure to stealth strategy. It’s important for gamers to think of Hitman GO as a spinoff, rather than a proper continuation of the franchise. Perhaps Agent 47 will become the next Mario, popping into go-karts, onto tennis courts, and so forth. Or not.

Weather Station - bigsool.com Our mission At Bigsool we try to take ourselves not too seriously. We're more focused on taking the solutions for your needs and requirements serious, and spend a large amount of time making sure we do what we do best: finding simple and elegant solutions to complex problems, using a perfect mix of innovative design, user experience, and code. Our means

55 Beautiful Apple iPad Wallpapers - Noupe Design Blog May 31 2010 This is the age of iPhones, iPods and iPads, people simply love to have these amazing inventions of information technology. Apple iPhones have created a state of euphoria among its users with its amazing features and iPad is another product from Apple team that will let you browse internet, watch video, listen music, read books with just a finger touch. We are sure some of you have already purchased it and now want to customize it. For this you must be looking for some beautiful wallpapers that will match with the theme of your iPad. Top 60 best free iPad apps 2012 On comparing iPad apps with iPhone equivalents, one thing rapidly becomes clear: apps for Apple's tablet are pricier. Many of the best free iPhone apps cost money in their iPad incarnations, and the quality level of what's still free is often ropey. But among the dross lie rare gems – iPad apps that are so good you can't believe they're still free. Of those we unearthed, here is our pick of the best free iPad apps.

50+ iPad Resources You Might Have Missed Apple's iPad is the little device that could. Any scepticism about Apple's tablet technology was largely erased as the iPad took touchscreen technology to a larger, more robust high. We've tracked the iPad through its first months in public hands with a slew of features and resources. We've here collected some of our best — sometimes bizarre — resources for you to get all caught up. Whether you're looking for the best business apps, need some decals to trick out your device, or just want to see if your iPad works in space — this collection of more than 50 iPad resources is sure to suit your needs. 15 Favorite iPad Apps As Selected By Teachers Out of 125 responses from teachers indicating their top 3 apps, these are the apps that were listed most often. Over the last few weeks, we ran a survey asking teachers to tell us about two or three of their favorite iPad apps that they use in an education-related context. Today we share the apps that were listed most often, and include some feedback from teachers regarding why they like them so much. As it turns out, free apps really outweighed paid apps in our survey responses. Here I list eleven free apps that rose to the top of the list when ranked by numbers of votes, followed by four paid apps that performed as well as the lower ranking free apps.

Introducing the TED iPad App Today, TED releases the new TED iPad app, an innovative way to browse and watch TEDTalk video. The app redesigns the TED experience for the touchscreen, offering some cool iPad-only features for exploring, saving and watching. The iPad app, which is the first official mobile app released by TED, lets viewers browse our almost 800 TEDTalks, running from 3 minutes to 30 minutes long, on a wide range of topics. The app is free and can be downloaded through the App Store in iTunes.

30 Useful iPad Apps for Business & Presentation Apple sold more than 1 million copies of iPads in the first 3 months. This gadget is definitely more than just a larger version of iPhone or iPod touch. With 4x the screen of an iPhone, the iPad’s display is ideal for reading and for presentations. 50 best free iPad games So you've got an iPad and have come to the dawning realisation that you've got no cash left to buy any games for it. Have no fear, because the App Store offers plenty of iPad gaming goodness for the (unintentional or otherwise) skinflint. Our pick of the 70 best free iPad games is listed below. Note that apps marked "universal" will also work on an iPhone or iPod touch, scaling down controls and graphics accordingly. 1. Dumb Ways to Die (universal)

GetGlue: Check-in to tv, movies and music Social Network for Entertainment Discover what to watch, share what you're watching with friends and fans, and get updates from your favorite shows.