Summify - 40 Google Plus Tips for Newbies 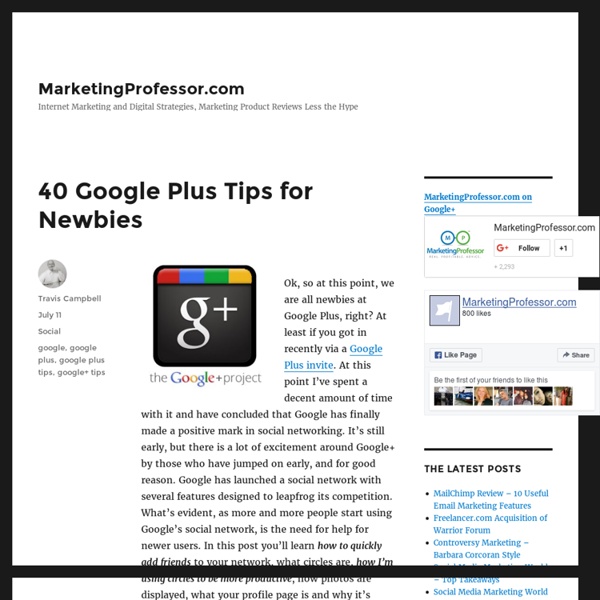 Ok, so at this point, we are all newbies at Google Plus, right? At least if you got in recently via a Google Plus invite. At this point I’ve spent a decent amount of time with it and have concluded that Google has finally made a positive mark in social networking. It’s still early, but there is a lot of excitement around Google+ by those who have jumped on early, and for good reason. Google has launched a social network with several features designed to leapfrog its competition. What’s evident, as more and more people start using Google’s social network, is the need for help for newer users. 40 Google Plus Tips for Newbies Last Updated August 18th, 2011: Replaced tip #22 (old) with a fresh resource on changes on Google plus. July 20, 2011: Added a video in the advanced tips section informing readers how to share a link on Google Plus as their currently isn’t an easy way for website owners to offer that option for readers. *A word about updates to this post. [/unordered_list] [/toggle]

Google+ Now Lets You Upload Address Books From Outlook, Your Mac, And More Googler Paul Linder just pointed out that there’s now an option in Google+ for users to upload address books in order to find and invite more friends to join the company’s brand new social networking service. As Vic Gundotra added shortly thereafter, this is a fairly big deal. We heard the address book importing feature was coming, but it looks like it was just added a few hours ago.

How To Customize Google+ Not crazy about Google's design choices for Google+? Using scripts for Greasemonkey, Extensions for Chrome, Firefox Add-ons, and other browser plug-ins, you can make some pretty wild changes to the look and feel of the site. You can also take a more utilitarian route and take advantage of code that can translate posts from directly within Google+ or port all your Facebook photos to Google+ Photo (i.e., Picasa), where storage is virtually unlimited if you have a Google+ account (photos 2048 x 2048 pixels and smaller don't count toward your 1GB allowance). Check out these 16 scripts and tools that modify or enhance Google+ The Beginner's Guide to Google+ When Google+ entered the social space in 2011, it was met largely with skepticism. Joining a crowded field with platforms such as Facebook and Twitter, many users questioned the need for another social network. But roughly two years later, Google+ has established itself as the second-largest social media site in the world and boasts a monthly active user base of 235 million. And some of the products that Google built into the platform, such as Hangouts and Communities, along with its added integration in Google News that can benefit an active poster, have made Google+ an intriguing network for all users.

Google+ Approaches 18 Million Users [REPORT] Using Google+? Add Mashable to your circles. You'll get the latest about new Google+ features and tips and tricks for using the platform as well as top social media and technology news. continues to set records as the fastest-growing social network in history, but Google's social juggernaut is beginning to show signs that it's losing steam. Ancestry.com co-founder Paul Allen (not to be confused with the Microsoft co-founder of the same name) posted his most recent analysis of Google+'s growth on his Google+ account Tuesday.

40 Google+ Tips & Tricks For Power Users July 27, 2011, 8:24 AM — Google+ is all the rage right now. Even under its limited-invite "field trial" phase, the social sharing service is growing in leaps and bounds, with oodles of new users joining every day and even more champing at the bit to get in. Most of us, however, are only beginning to scratch the surface of what Google+ can do; like many Google products, G+ is brimming with advanced features and untapped tweaks. That's why I decided to put together this massive list of Google+ tips and tricks. It includes some of the best power-user pointers I've found both from my own experimentation and from following some really smart folks in the Google+ universe.

Power Google www.google.com Welcome to Power Google, By Robert Harris, a practical, how-to book about using Google to locate information on the Internet. Below you will find a brief description of each chapter’s content along with two formats in which they can be viewed (Adobe® or HTML). If you do not have an Adobe® Acrobat® reader or would like to update your current reader to the latest version, click on the Adobe® icon below for a free download. Please note: Download times will depend on the Internet connection. The top 10 features missing from Google Plus Google+ has captured the attention and the imagination of the technology world. But, it's easy to forget that it's still in closed beta. Here are the top 10 things that need to be fixed or added.

Ultimate Guide to Google Plus I’ve seen quite a few people who don’t understand Google Plus or think Google Plus is some sort of wasteland with giant swaths of inactivity. I was one of these people until I decided to dive in and really explore the social network and become active on there to see what this G+ thing is all about. The end result is this guide, a complete Google Plus guide for the person who is just getting started, or quite simply, started but staring at a boring feed with zero activity. Take a look at the sections below and click any section that has your interest. Google Search Operators - Search Help You can use symbols or words in your search to make your search results more precise. Google Search usually ignores punctuation that isn’t part of a search operator. Don’t put spaces between the symbol or word and your search term.