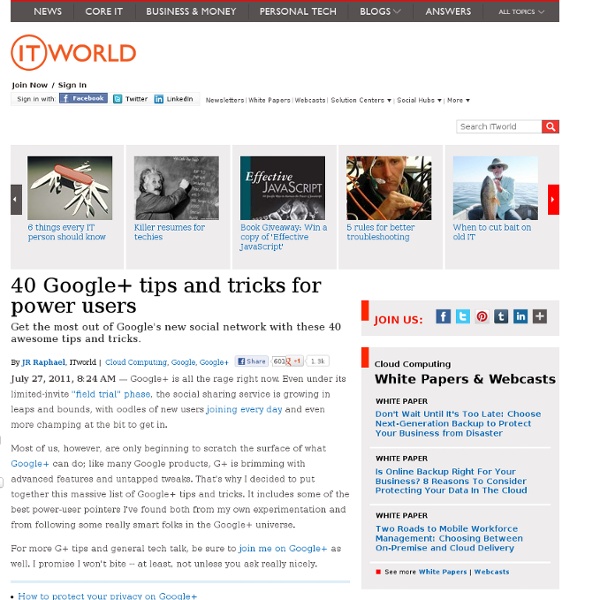 July 27, 2011, 8:24 AM — Google+ is all the rage right now. Even under its limited-invite "field trial" phase, the social sharing service is growing in leaps and bounds, with oodles of new users joining every day and even more champing at the bit to get in. Most of us, however, are only beginning to scratch the surface of what Google+ can do; like many Google products, G+ is brimming with advanced features and untapped tweaks. That's why I decided to put together this massive list of Google+ tips and tricks. It includes some of the best power-user pointers I've found both from my own experimentation and from following some really smart folks in the Google+ universe. For more G+ tips and general tech talk, be sure to join me on Google+ as well. Google+ Tips Part 1: The Stream 1. 2. 3. 4.

Google Plus – Read the Fine Print BEFORE You Sign Up Copyright Scott Bourne 2002 - All Rights Reserved Here’s an update to this post – written to help settle the confusion caused by trolls mischaracterizing what I said. Please read my words – not what the trolls say I said – and judge for yourself. Thanks. Google is the company that started out with a simple mission – don’t be evil. McClelland - Theory of Needs Management > McClelland McClelland's Theory of Needs In his acquired-needs theory, David McClelland proposed that an individual's specific needs are acquired over time and are shaped by one's life experiences. 7 Clever Google Tricks Worth Knowing Email Below I have compiled a list of 7 clever Google tricks that I believe everyone should be aware of. Together I think they represent the apex of the grand possibilities associated with Google search manipulation tricks and hacks. Although there are many others out there, these 7 tricks are my all-time favorite. Enjoy yourself.

How To Customize Google+ Not crazy about Google's design choices for Google+? Using scripts for Greasemonkey, Extensions for Chrome, Firefox Add-ons, and other browser plug-ins, you can make some pretty wild changes to the look and feel of the site. You can also take a more utilitarian route and take advantage of code that can translate posts from directly within Google+ or port all your Facebook photos to Google+ Photo (i.e., Picasa), where storage is virtually unlimited if you have a Google+ account (photos 2048 x 2048 pixels and smaller don't count toward your 1GB allowance). Emotions Are A Resource, Not A Crutch. Ever since Darwin, and perhaps long before him, it has been theorized that our emotions play a crucial role in adapting to our environment. This means that emotions are not just an inconvenient byproduct of consciousness, but a form of higher cognition – an ability for living beings to experience their world in deeper and more complex ways. Humans are a species that thrive on social relations, and our emotions become a gauge on morality and justice. They help facilitate our interactions by giving us clues on how to connect with others in meaningful and productive ways.

How to Make Cinemagraphs — Still Photos that Move Like Movies! Yup, that picture moves. Nope, you’re not going crazy! ‘Cause who said photos can only feature “still” life? Inspired by the moving pictures created by photographer and motion designer duo Jamie Beck and Kevin Burg, we set out to make the magic happen. Make your pictures move like ours did with a some Photoshop magic! Make DIY Moving Photos! Frederick Herzberg Frederick Irving Herzberg (April 18, 1923 – January 19, 2000) born in Massachusetts was an American psychologist who became one of the most influential names in business management.[1][2] He is most famous for introducing job enrichment and the Motivator-Hygiene theory. His 1968 publication "One More Time, How Do You Motivate Employees?" had sold 1.2 million reprints by 1987 and was the most requested article from the Harvard Business Review.[3]

100+ Google Tricks That Will Save You Time in School – Eternal Code [via onlinecolleges.net] With classes, homework, and projects–not to mention your social life–time is truly at a premium for you, so why not latch onto the wide world that Google has to offer? From super-effective search tricks to Google hacks specifically for education to tricks and tips for using Gmail, Google Docs, and Google Calendar, these tricks will surely save you some precious time. Search Tricks These search tricks can save you time when researching online for your next project or just to find out what time it is across the world, so start using these right away. Convert units. 40 Google Plus Tips for Newbies Ok, so at this point, we are all newbies at Google Plus, right? At least if you got in recently via a Google Plus invite. At this point I’ve spent a decent amount of time with it and have concluded that Google has finally made a positive mark in social networking. It’s still early, but there is a lot of excitement around Google+ by those who have jumped on early, and for good reason. Google has launched a social network with several features designed to leapfrog its competition.

The Top 10 Psychology Studies of 2010 The end of 2010 fast approaches, and I'm thrilled to have been asked by the editors of Psychology Today to write about the Top 10 psychology studies of the year. I've focused on studies that I personally feel stand out, not only as examples of great science, but even more importantly, as examples of how the science of psychology can improve our lives. Each study has a clear "take home" message, offering the reader an insight or a simple strategy they can use to reach their goals , strengthen their relationships, make better decisions, or become happier. If you extract the wisdom from these ten studies and apply them in your own life, 2011 just might be a very good year.

War on Drugs On May 13, 2009, Gil Kerlikowske—the current Director of the Office of National Drug Control Policy (ONDCP)—signaled that the Obama administration did not plan to significantly alter drug enforcement policy, but also that the administration would not use the term "War on Drugs", because Kerlikowske considers the term to be "counter-productive".[11] ONDCP's view is that "drug addiction is a disease that can be successfully prevented and treated... making drugs more available will make it harder to keep our communities healthy and safe."[12] One of the alternatives that Kerlikowske has showcased is the drug policy of Sweden, which seeks to balance public health concerns with opposition to drug legalization. The prevalence rates for cocaine use in Sweden are barely one-fifth of those in European countries such as the United Kingdom and Spain.[citation needed]